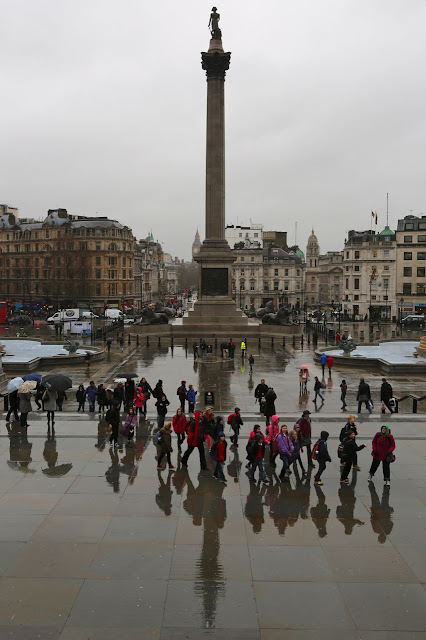 This is what London looked like yesterday. Quintessentially British, right? Cold, rainy and gray, with temperatures in the 40s. I went to Trafalgar Square to attend an exhibit at the National Gallery -- a photography show, in fact -- and I took this photo from the front portico.

The exhibit was mildly interesting -- it explored the connections between modern and early photography and painting. For example, it paired still-life paintings of fruit by Dutch masters with still-life photos from the 1800s, and a modern day video of a pile of fruit decomposing on a plate. I guess it's not news to me that art is connected, that newer pieces often grow from ground plowed and sown by earlier artists. But I was unfamiliar with many of the artists and all the individual pieces, so it was intriguing to see new and different works.

I went partly because I'm fascinated by Richard Learoyd's photo "Man With Octopus Tattoo II," which is used in the promotional materials for the show. Isn't that an incredible tattoo? I wouldn't have the courage or endurance to decorate my body with such a thing -- and I'd be worried about how it would look in 50 years. But maybe that's the point. Maybe it's just about being beautiful now.

I bought the photo in postcard form, which doesn't do it justice but fits my finances. The exhibit paired it with illustrations of Laocoön wrestling with sea serpents, which lends a somewhat threatening tone to the octopus tattoo. Is it a sinister presence, indicating a struggle within the model? 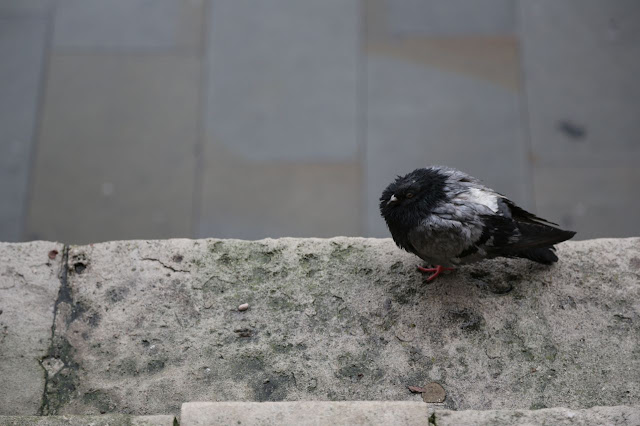 Afterwards I wandered down Charing Cross Road and took some photos of my own on the way to the tube, despite weather that discouraged even the pigeons.
Posted by Steve Reed at 6:14 AM