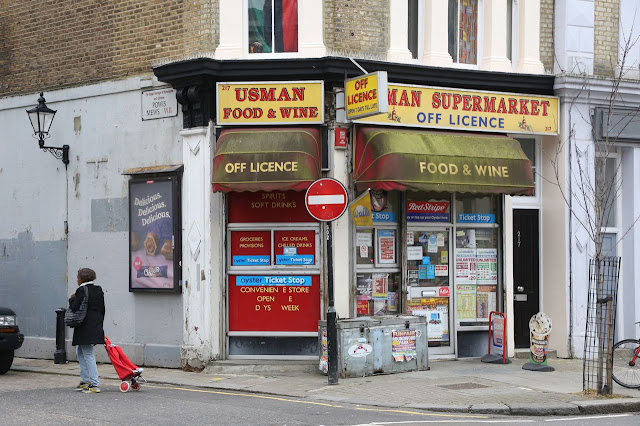 I've been wanting to photograph this grocery near our flat for some time. Aren't those great awnings? Yesterday I finally got around to hauling my camera over there. My fingers could barely work the buttons they were so freaking cold.

The forecast today calls for a high of 35ºF. According to the news, our deep freeze is due to "easterly winds from Scandinavia," which sounds a lot more exotic than it feels.

I sorted out a few things with the dog yesterday. I got her the kennel cough vaccine, and I also bought a pet insurance plan -- something I never thought I would do. The kennel requires it, though. So now Olga has health insurance, something that many citizens of my own country don't enjoy.

The world is insane.

I was reading an article recently about the proliferation of real animal fur in garments that purport to be made of faux fur. Apparently real fur is being farmed on such a scale in China (from an animal known as a raccoon dog) that it is cheaper than the fake stuff. We're wearing some dogs, and insuring others! Crazy!
Posted by Steve Reed at 7:12 AM