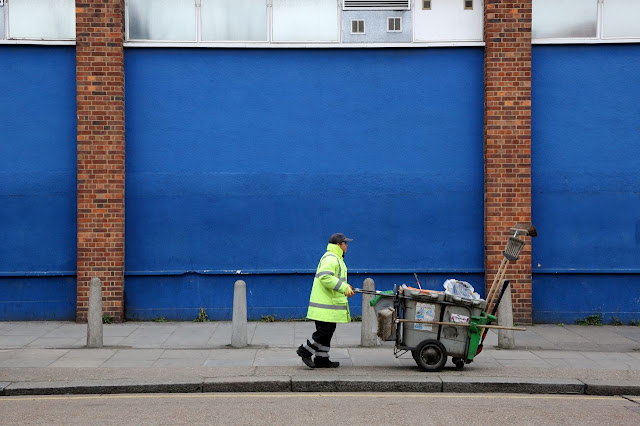 I stalked this street sweeper for about ten minutes in order to get this photo. I saw him working in East Ham on Saturday, and his neon green coat looked so great against that big blue wall. But when I first spotted him, he was standing a long way from his picturesque cart. I stood across the street and tried to look nonchalant, waiting for him to rejoin the cart.

Well, I probably looked super suspicious, standing there with my camera -- like one of those cartoon characters trying to be inconspicuous, whistling and staring upward into space. He saw me and seemed to deliberately steer clear of the cart for a long time. He even got on his cell phone, which made me think, "Oh, great, he's calling the police!" But finally he came back and I had time for just one shot before he was out of the frame.

Yesterday was the best day we've had in months, weather-wise. Temperatures got up into the 60s, the sky was blue, the sun was out. I walked Olga a few times and took her out into our apartment complex's fenced yard to play fetch. We developed a game whereby I would throw her stick toy, she would fetch it, and then we would both race to the corner of the yard where the daffodils are growing -- me to protect the daffodils, her to rip through them. I got there first and fended her off almost every time, but there was some daffodil carnage, and now we have three broken yellow buds in a vase on the windowsill waiting to bloom.

Guess I better keep her out of that yard until after daffodil season.
Posted by Steve Reed at 6:33 AM

It was worth the wait for that pop of color! I had to laugh at your "stake-out."

Funny how your day was beautiful yesterday too, as ours was. The sky was BLUE for a change, the wind was not blowing and it got up to almost 50. Made me want more! But ... before that can happen it looks like we have to have snow. Again.

Now THAT is blue. And green. Love that you got a shot of the colors you are finally seeing in your world in sky and growth.

Just wanted to say how much I enjoy your photos and the window into your world. Thanks for sharing your world with us. I have never been to London and may never get there, but I've seen some wonderful images through your posts.

I know this makes me sound a bit like an anglophile geek but, every now and then I look at the Abbey Road web cam and if it's early in the morning London time, I'll see a guy just like this walking down the street with his cart.
(PS; I really am a bit of an anglophile geek.)

Yep, stalking...I've done it - very badly! Took a photo of a woman working on her computer in a NY park once and got such a dirty look, I pretended the camera went off my accident...how lame! Loving your photos!

That is a beautiful blue -- and I am glad that the colors of the grass and sky are warming up the gray of London!