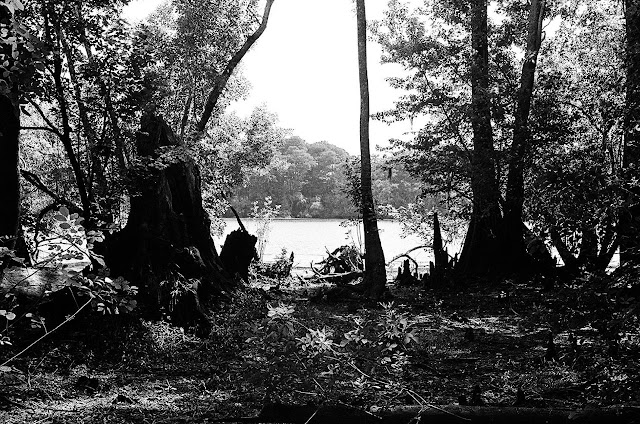 Back in 1987, when I was an editor at the University of South Florida student newspaper, the Oracle, I wrote a regular column called "Granola Beat." It was ostensibly an outdoors column, about hiking and nature and stuff like that. What qualified me to write about these topics I'm not sure, because I spent far more time shopping at Goodwill than hiking. But I did grow up in Florida and I knew the lay of the land, and something about the animals and birds and plants, so maybe that was enough.

In June 1987, my brother and I took an ill-fated trip to the Withlacoochee State Forest in Hernando County in order to gather material for the column. I took along my camera and shot a roll of black-and-white film.

Yesterday I had the negatives scanned, and here are the results. Many of these photos were never printed, even for my own private use. 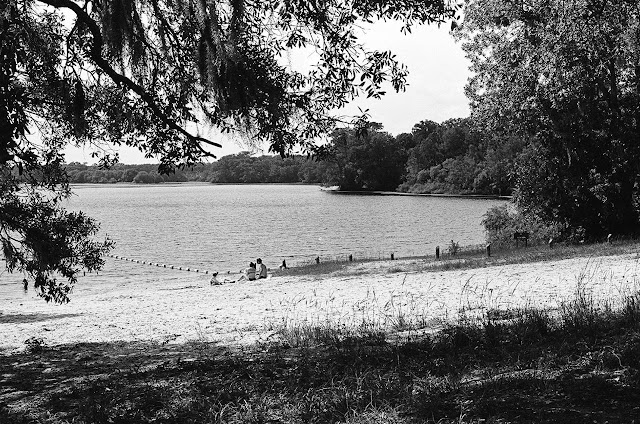 As I later wrote in my column, we stopped first at Silver Lake, a wide spot in the Withlacoochee River.  "We stayed at the beach for a while, enjoying ourselves," I wrote. "Then we walked on a trail that was barely a trail into the forest, where we saw no one else for a mile or so, until we turned around. I was sold on the place already. The forest was green and lush, the lake was clean and bright, and there were all types of trees and plants and animals everywhere."

(Apparently I wasn't big on specificity.) 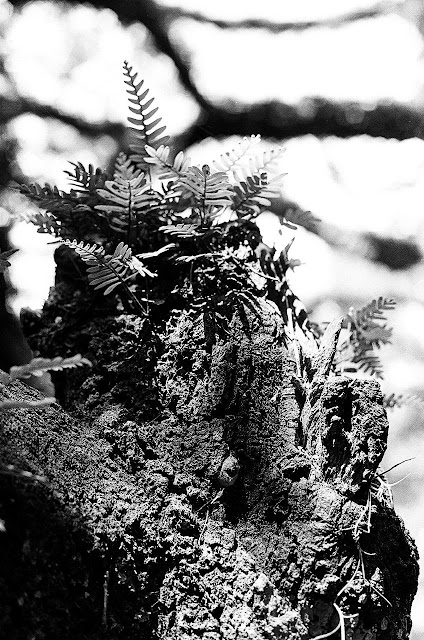 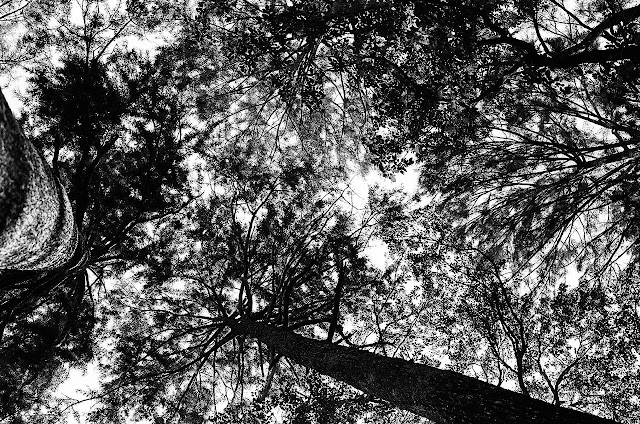 Then I decided we needed to visit the abandoned Buschenbaugh phosphate mines, located deep within the forest. We went back to the car and drove the largely unmarked roads. (As my brother put it at the time, according to the column: "There's nothing anywhere to tell you where you are.") The road eventually turned from asphalt to dirt. 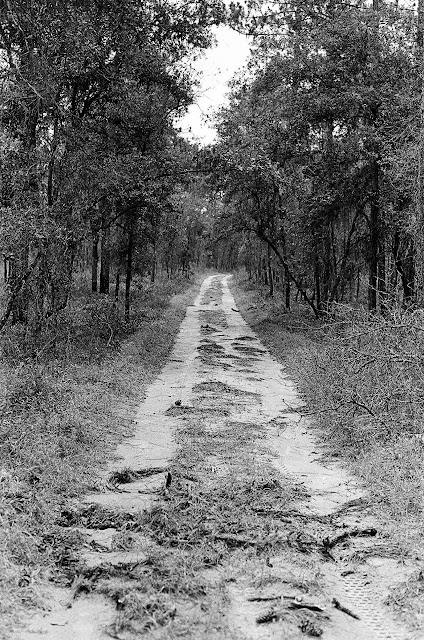 Armed with a 10-year-old road map, I decided we needed to make some turns, and we did. We drove around a mudhole, and onto an even smaller dirt path. We had to move branches out of the way. We made more turns in a vain effort to find the mines.

Finally we came upon a dead pine tree blocking the path. I tried to turn the car around. And we got hopelessly stuck in the sand. 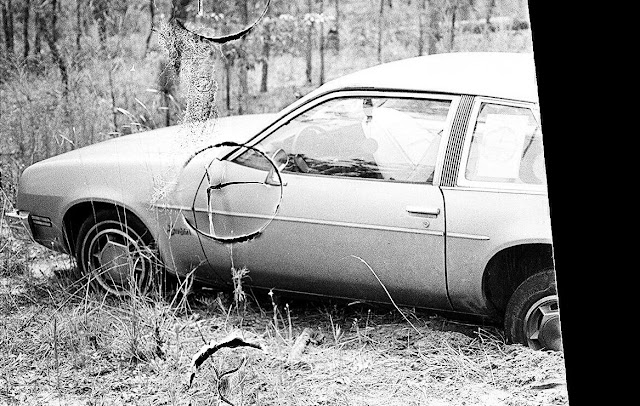 (Unfortunately, the photo of my stuck car was mangled by one of the Oracle's photo editors during processing.)

My brother and I wound up hiking about six miles (more hiking than I ever did for any other Granola Beat column, I'm sure) to the park ranger's house, where his wife called us a tow truck. "I don't know how I ever found the car again," I later wrote. "I was afraid we'd have to resort to a helicopter search or something. But the tow truck got there, and the driver told me all the trails I had driven were restricted and very illegal to take by car."

Our (probably very unhappy) mother had to drive up to Brooksville to pay the towing company, because of course neither my brother nor I had any cash.

But all's well that ends well. The car was salvaged, the column ran, and I saved the negatives all the years since, never seeing many of the photos until now. We never did make it to those phosphate mines.
Posted by Steve Reed at 6:40 AM

Now THAT looks like home to me. What an adventure you had! I'm so glad you got those shots. Black and white is amazing sometimes, isn't it?

Good lord. How did any of us survive our youthful misadventures? :-)

What great black & white photos! And what an adventure! We didn't live too far from Brooksville. I always thought it was pretty there. Also loved reading your writing from back then. I am so amazed that you kept all that stuff!

Why hasn't someone written a song (like Alan Jackson's) that could be about the Withlacoochee.? :)

I love these pictures! I keep meaning to do some black & white pictures - the closest I come is editing them digitally but I think I'd have better pictures if I PLANNED for them to be B&W.

And that's a great story. I have one too about getting stuck in the mud in a small game park in Zimbabwe with my mother & grandmother. (The park was small - the game was supposed to be large but thank goodness we never saw anything while I was stuffing rocks under the tires to make them move!).

I love these shots -- especially the car and the treetops. Fantastic --

I actually love the mangled car photo. There is something atmospheric about it and has slightly more substance than 'just another photo.

When I saw 'ill-fated' I could not wait to read on. That was one cool adventure!

And I never went with you on a hike again.

Utah: Only on posts more than five days old. Cuts down on the spam.