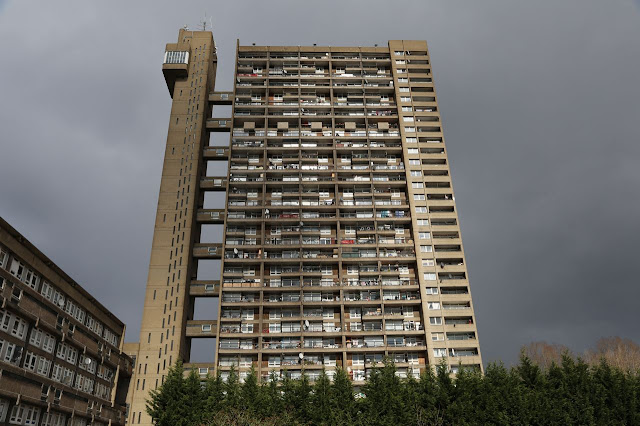 Yesterday I walked over to Trellick Tower, every Londoner's favorite example of Communist-bloc architecture, on one of my regular graffiti-photography jaunts. I left Olga at home, because the last time I was at Trellick, the courtyard had been turned into a muddy mess by a construction project. (The courtyard is where all the graffiti is -- it's more or less a sanctioned art spot, from what I understand, so no one gets prosecuted for painting there.) The construction has progressed and conditions are better than they were, but I'm still glad Olga wasn't there to get her dainty white toes dirty.

There wasn't a whole lot in terms of new graffiti, probably because of all the bulldozing. So I came home, running some errands along the way. I also took Olga for two lengthy walks, and we were subjected to a few brief snow showers, which surprised me. It didn't seem cold enough for snow. And granted, it was the kind of snow that vanishes more or less immediately. 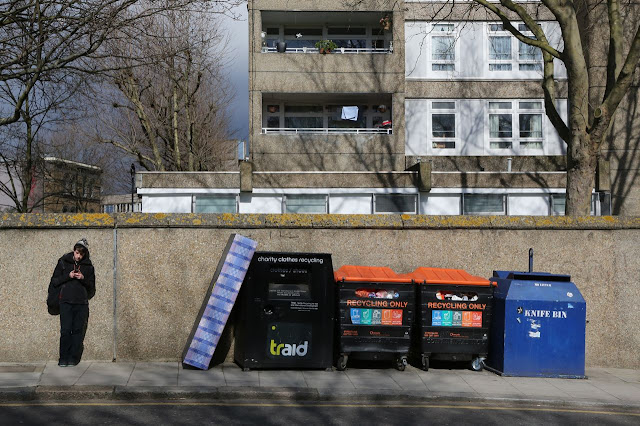 Trellick is the location of our friendly neighborhood Knife Bin, which I wrote about last fall.

Dave took off for Dubai yesterday, on a performance trip with some of his music students. It sounds very exotic, but this is de rigueur for the school where we work. Those kids are always off on a jaunt to some country or another. I didn't try to tag along to Dubai, although I've never been to the Arabian peninsula. I'm holding out for Romania in April (speaking of Communist-bloc architecture). Dave will be gone until Sunday, which means I'll be eating a lot of lentils and peanut butter. I don't mean this to sound bleak -- both are among my favorite foods.

I've been catching up with some old movies: "The Goodbye Girl" on Tuesday, which was better than I remembered it; "Mozambique" yesterday, a cheesy British thriller from 1965 actually filmed in Africa; and "The Pumpkin Eater," which I've wanted to see for years but have never been able to rent. Just found it on iTunes this week and watched it last night. (A young Maggie Smith, and Anne Bancroft pregnant and drinking a beer! Ah, the early '60s! The depressing screenplay is by Harold Pinter, whose grave I saw last October at Kensal Green.)

"Mozambique" was filmed partly at Victoria Falls, which I visited while in Africa in 2006. I posted a trio of rather nondescript photos back then, during the era of my ultra-brief blog posts. (I was somewhat nervous about putting myself out there on a blog in those days, so I didn't write much. It took me years to realize it didn't matter because so few people read it!) Anyway, it was cool to see the town of Victoria Falls, the Falls themselves, and the Victoria Falls Hotel (where I had coffee with friends one morning during the worst hangover of my life) all in the movie. I remember sitting on the hotel terrace overlooking the iron-girder bridge that spans the gorge between Zimbabwe and Zambia -- in the film, that bridge plays a pivotal role in the peak scene. I wouldn't say it's a good movie, but it's not terrible.
Posted by Steve Reed at 5:44 AM