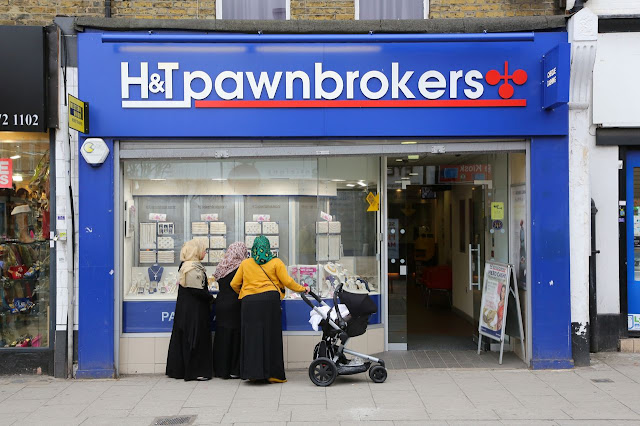 Just in case you're curious, here's a bit more detail about my long walk on Saturday. I started in Canning Town and walked northeast along Barking Road, through Plaistow, Upton Park and East Ham. I then turned north and walked up through Manor Park and Aldersbrook, and ended at the Leytonstone tube stop. Altogether, I walked a bit more than six miles.

Most of the neighborhoods I passed are working class with widely diverse immigrant populations, which always makes for great photography. I can't get enough of London's cosmopolitan atmosphere. I saw a wide range of shops and businesses, from Russian delis to African restaurants. The area also has quite a football tradition, and I walked past the West Ham football stadium and a huge statue commemorating four key players in England's 1966 World Cup victory. It's not often you see a statue of football players. 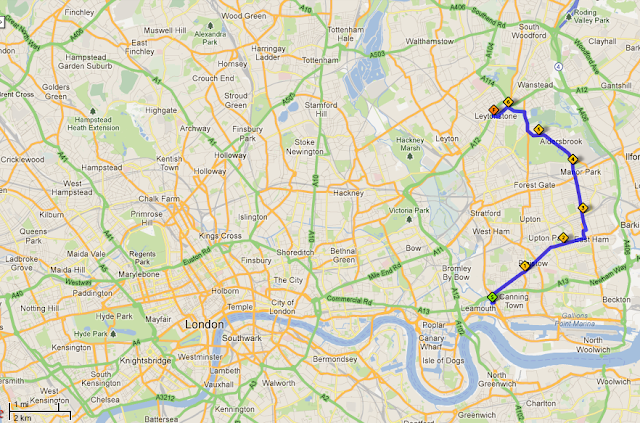 It was an interesting route because it took me through both urban areas and the woods of Epping Forest, a scattered band of parkland east of London. I was never far from civilization and the hum of traffic, but I could at least create the illusion of being in the wilderness! Yesterday Dave and I saw "Silver Linings Playbook," an outing that turned out to be a bit more difficult than we imagined. We went to one theater near our neighborhood and tickets were sold out, so we hopped on the tube and went downtown, where we saw a slightly later show. I suppose the Oscars have brought the film more attention. At any rate, we really liked it -- we talked about it quite a bit on the way home. I can see why Jennifer Lawrence won, because she does seem very natural in her part. Bradley Cooper did a great job, too. I wonder if he'll suffer from Tom Cruise/Brad Pitt syndrome, where he's never taken seriously because no one can get past the pretty face.

While waiting for our movie, we grabbed a cup of coffee at an outdoor cafe in Leicester Square, and it felt so amazing to sit in the sun and take off my jacket. Spring is on the way!

(Top photo: Women check out the jewelry at a pawn shop in East Ham.)
Posted by Steve Reed at 7:09 AM