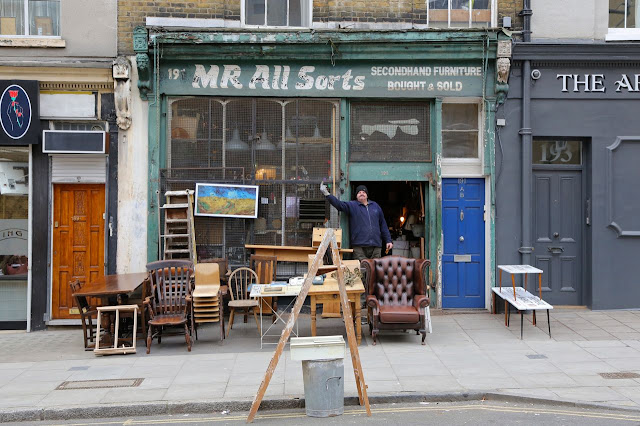 Some of you may remember my journey to the strangely named QEQM building at St. Mary's Hospital a few weeks ago, when I tried to have an ultrasound on my painful index finger joint. They sent me away to return at an appointed time, and that appointed time was yesterday. So I finally got my ultrasound, as well as an x-ray.

What I did not get, at least not yet, is a conclusive answer about what's making my finger hurt. The doctor wasn't convinced he could feel any sort of lump -- as I can -- and the ultrasound, at least, didn't show anything obvious. I didn't get the x-ray results; I have to return to my doctor in a week or so for those.

As I said before, I'm not worried about it. I'm just having it checked out so when they have to amputate my finger in a year's time, people won't say, "If only you'd gone to the doctor sooner."

After my QEQM adventure, I decided to take advantage of the fact that I was out of the house and away from the dog, and I took a photo walk up through Islington, a borough of north-central London. I got some good shots, and it was nice to be out and about and footloose and fancy-free (whatever that means). When I came home I found that Olga had eaten the mail and pulled up the hallway rug -- or at least, the underlying sticky mats that held the rug in place. Those mats are in the trash now. And we move on.

I've read more about the Michelle Shocked situation that so distressed me earlier this week. An audio recording of the disastrous portion of her performance has been posted online, and listening to it is a profoundly uncomfortable experience. But I'm glad I did, because I've decided she really is mentally unwell, and whatever apparently homophobic things she said arise from a desperately conflicted person in thrall to some extremist theology (and possibly lacking necessary medication). I've decided to forgive her. I really don't think she meant to be hateful.

(Photo: Speaking of hateful, Mr. All Sorts definitely did not want his photo taken. But I wasn't going to pass up that wonderful shopfront, complete with ladder to hold the parking space out front. Him flipping me off makes it all the better!)
Posted by Steve Reed at 6:53 AM