Eurovision, and Some Purple Flowers 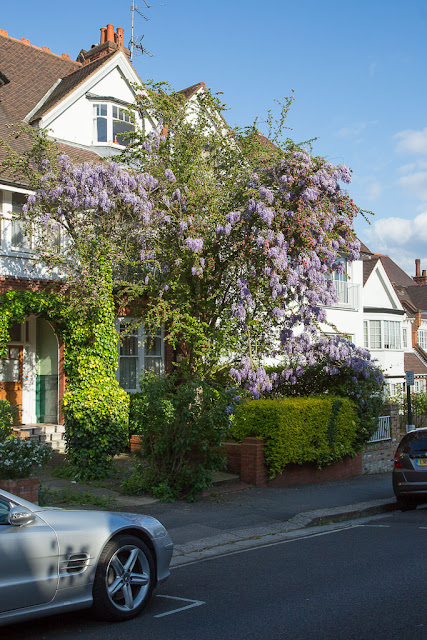 One of the houses down the street has an incredible wisteria vine in front, twining through a blooming hawthorne tree. It's quite a display. Wisteria has a bad reputation for taking over, but -- kind of like water hyacinths in Florida -- it sure looks nice in the meantime. 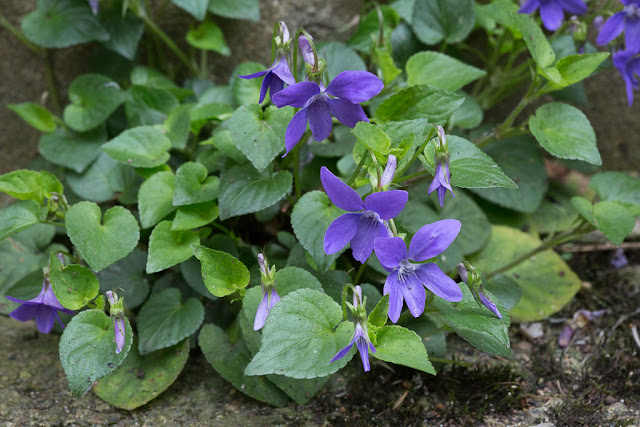 And here's a little violet we have growing up through the paving stones on our patio. We don't use weed killer, because I'm convinced it's a menace to ecology, so we get all kinds of plants coming up through the patio cracks -- violets, campanula, forget-me-nots. (As well as plain ol' grass.) I like the ragged look!

Last night we had some friends over to watch the Eurovision song competition. This was Dave's first social gathering since his surgery, and we figured he could manage because he'd be home -- if he got tired he could simply go to bed. As it happened, he stayed up for the entire contest, and watched it stone sober, for which he deserves his own Eurovision award.

Personally, I found the contest as a whole less interesting this year. Ukraine's Jamala won for her song about the World War II-era deportation of Crimean Tatars by Russia. It was a good performance but it's not a song anyone's going to walk around humming. I suspect it won largely for political reasons. (Take that, Vladimir Putin!) Our UK entry came in 24th, even though it was much better than last year's and, I thought, pretty catchy. (Maybe we're being punished for Brexit?)

Will we ever have another Bucks Fizz?
Posted by Steve Reed at 7:26 AM

That tree is gorgeous! That one would stop me in my tracks too. I played those videos and enjoyed them so much especially the British entry. I let You Tube roll on and the next thing I knew I was listening to the 1974 ABBA entry of Waterloo. That got my dancing feet moving early this morning. That was fun!

The color purple. There.

I like plants but I'm a low "F" when it comes to identification. so good on you for being able to name the plants you have.

Beautiful shot of that violet. If you ever do want to get rid of things that grow between the stones, boiling water will do it without toxins. But I have to say I like the look of things growing wildly too. I like my nature a bit uncontrolled :)

I love wisteria. Mine didn't bloom this year which is unheard of. I thought maybe it had died which is also unheard of but no, it very vigorously green. and I love the violets and other things that come up in the cracks and bloom. and easy enough just to pull the grass out when it pops up. I'm with you. my place is a not poison zone. herbicides/pesticides don't just kill or damage what it says it targets. it is poison and we are all made up of the same biological stuff so to think we aren't affected as well is naive at best. and the poison doesn't go away, it seeps into the dirt and the water.

Britain could put up a band containing Elton John, Mick Jagger, Eric Clapton and Paul McCartney singing the best song ever composed by Burt Bacharach and we still wouldn't win! Those damnable eastern Europeans see our country as America's lapdog and they refuse to listen fairly to the quality of any song we present. Joe and Jake were obviously far better than third from bottom. We should bomb the *******s or build a wall. Who's gonna pay for it? Mexico!

That house looks like one I'd like to live in! It's quite beautiful. Glad Dave is continuing to heal well.