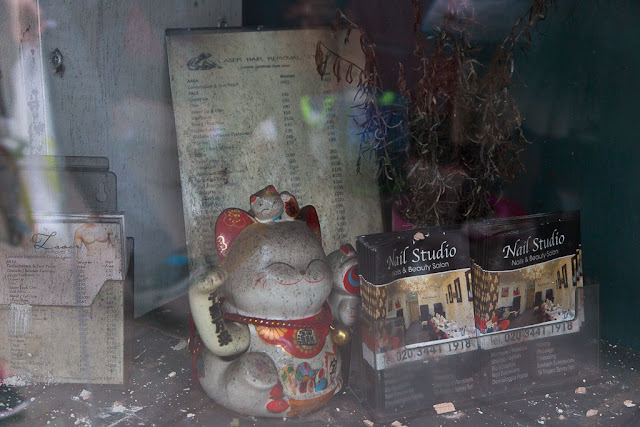 Remember the big fire in our neighborhood last October? Two shops were severely affected, a nail studio and a mobile phone repair business. Both are still closed. The phone repair place is boarded up, but the interior of the nail salon is visible from busy Finchley Road through the ash-and-soot-streaked front windows. 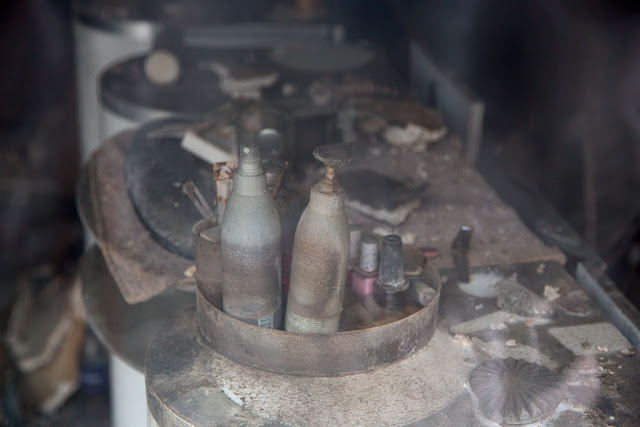 It's a strange scene, with nail supplies still laid out on trays atop tables, and debris from the building heaped on the floor. It looks to me like they locked the doors after the fire and haven't touched the place since, though a representative -- on the shop's Facebook page -- said a few months ago that they intend to return as soon as it's safe. Perhaps the building itself is still unstable.

I often walk past this shop after work. It's such a weird, frozen-in-time tableau.

Dave is still on the mend here at home. He's excited because today he's taking his first trip outside the house, to go get a haircut. He hopes to go back to school tomorrow, not to work, but just to see his students for a short time.

Yesterday some of my coworkers gave us a valuable grocery store gift card and some free movie tickets. It was very thoughtful and certainly unexpected! Between that and the "meal train" from the parents I've been impressed by everyone's generosity, though I still have a creeping feeling that we don't really deserve it. Why do I have such a hard time accepting help?
Posted by Steve Reed at 6:25 AM

Since the fire, where have you been getting your nails done Steve?

Poor waving Kitty! Those pictures are strangely moving, in the emotional sense.
I think it's hard for all of us to feel as if we deserve things. Well, most of us. The narcissists among us believe they deserve EVERYTHING and more.
So be reassured that you are not a narcissist.
Yay, Dave!

You work with a great group when they care enough to support you in tough times.

Ooh - those nail salon pictures make me think of the Mount Vesuvius exhibit we attended a few years ago. Spooky!

I remember after my hip surgery how excited I was to get out of the house (for something other than a doctor's appointment). I think I drove myself to Walgreens. Ha!

I am gladdened by the response to Dave's illness by his students and co-workers. It gives me back a little bit of faith in humanity. and obviously you do deserve it or you wouldn't be receiving it.

the nail salon, frozen in time, made me think of a mexican restaurant we used to go to that was next to a dance hall. they had the best cheese enchiladas I have ever eaten. we would often go for lunch and just as often, be the only ones eating there. one day we showed up for lunch to find the door looked and the place deserted but the tables all set as if for the dinner crowd. it stayed that way for months. the dance hall was closed too. eventually that section of the shopping center was remodeled.

Lovely of the parents and co-workers and I wish Dave a wonderful visit with his students.

Loving the spooky photos- the nail salon was likely the culprit, Passing by one that is in full swing is like passing by a toxic stew of gasses. One match could have torched the place. DAVE, be better sooner! Thinking about YOU!

Abandoned places are fascinating, aren't they? As you said, they are frozen in time. Glad Dave is continuing to improve!

It's so nice that both the parents and co-workers have been so generous and helpful. It shows how much you and Dave are appreciated.
Those photos are sort of eerie in a way. I wonder if there is some sort of insurance loophole that is holding things up. I would have thought by now that clean up would be well under way.

Wow-it just shows me that I shouldn't have breaks from blogging-albeit enforced by too much work, as I miss so much. I have just been back over the last month of posts to find out about Dave. I am glad he is at home on the mend now. It must have been a worrying time for you both. I enjoyed all the other posts on the way too.
The nail salon pictures are interesting-kind of post apocalyptic!