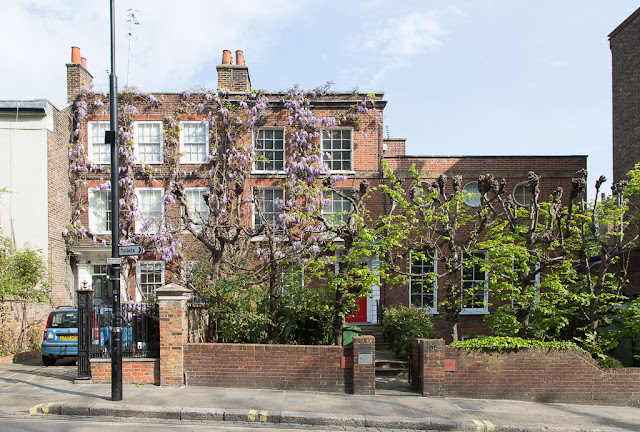 It may not technically be summer yet, but it sure feels like it. We've had a blast of sunny heat that put me in shorts and sandals yesterday and had pretty much the entire population of London outdoors. It was fun to see so many people out and about, lounging on West End Green and crowding the platform for the overground train at Hampstead Heath.

I took Olga up to Fortune Green and there were so many people in the park we couldn't throw her Kong toy for fear of, well, Konging someone. We also walked through the cemetery, where brush-clearing and mowing is continuing apace. I read an article the other day about some London cemeteries beginning to re-use older graves -- I wondered if that's behind the clearing effort. Maybe the council wants access to all those old plots because they could sell them again?

I spent the afternoon at the hospital. I was going to Skype with my mom for Mother's Day but I completely screwed that up by trying to use Dave's work computer -- which we belatedly realized doesn't have Skype -- and the hospital Wi-Fi, which is too slow. So I had to reschedule with her. She was cool about it. She knows things have been a bit nutty around here.

Finally, I took care of the garden, cleaned the house and did laundry. (It was a perfect clothesline day!)

I've been spending my evenings watching things on TV that I know Dave wouldn't want to see. I watched several episodes of The Brady Bunch on Saturday night, which was pretty fun with a few glasses of wine -- a Brady bacchanal! (Well, it wasn't that wild.) And last night I watched "Condominium," that early-80s TV miniseries that I bought on bootleg DVD a few years ago, with Barbara Eden and a cast of thousands. I found out that it was filmed at a real condo in Panama City, Fla. I'm surprised the owners and developers went for that, since it's essentially about the greed of developers and a dangerous, sub-standard building. Seems like a production they might not want to be associated with, you know?

(Photo: Some houses across the street from the hospital. London's wisteria is blooming!)
Posted by Steve Reed at 6:12 AM