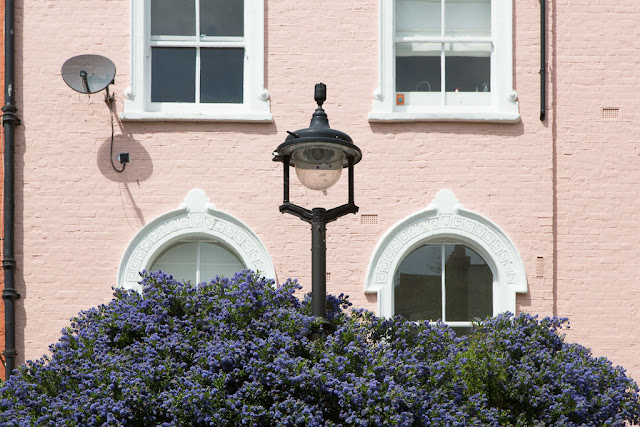 Dave made another expedition outside the house yesterday, this time to see his high school students perform in their year-end concert. Another music teacher conducted, but Dave at least got to watch the kids present the pieces they've been working on for weeks and months. He enjoyed it (and the concert was great) but once again, he was surprised at how tired he gets, and how quickly.

Last night we were eating dinner when someone rang our doorbell. It's almost always a salesman when someone rings at that hour, particularly on a Sunday, so when I went to the door and saw an unknown face through the window, I simply turned around and went back to the living room. It was only after I sat down that I thought it could be a delivery or something and I'd better double-check. Turns out it was a repairman from Thames Water, here to fix a wastewater problem at the side of the house. "Sorry!" I told the guy. "I thought you were a salesman!" He didn't seem too put off, but I guess I really should at least open the door and ask next time.

I'm reading a fascinating book -- especially for anyone who keeps (or has kept) a diary or journal. Called "A Life Discarded," it's non-fiction about some people in Cambridge who find more than 140 diaries, many of them decades old, in a rubbish bin. The book's author mines the contents of these diaries in an attempt to write a biography of the unidentified author -- he knows neither their name nor, for a while, their gender. It makes me think of that old diary I own that I bought at an estate sale in Massachusetts years ago -- and also of my own paper journals. It reconfirms my desire to finish transcribing and editing them so my raw venting doesn't fall into someone else's hands and, God forbid, become a book. I don't want to be remembered for things I wrote down when I was in a snit.

Which brings up an interesting question about the ethics of writing a book based on a stranger's private diaries. The author, Alexander Masters, hasn't really broached that subject yet, except to occasionally quote the diarist writing that he/she doesn't want the diaries to be lost and occasionally referring to future readers. I suppose everyone who keeps a diary thinks, on some level, about the possibility that it will be read -- it could be their ultimate horror or their ultimate motivation.