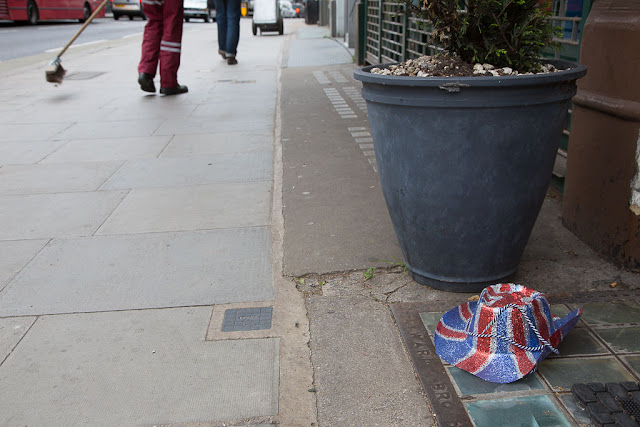 Olga and I found this shimmery Union Jack hat yesterday morning on our walk. It looks like a remnant from someone's party. My guess is when the owner stumbled home from the pub their hat didn't quite make it!

Speaking of patriotic themes, I have an acquaintance on Facebook -- someone I went to high school with -- who recently posted a news item from a far-right political party here in the U.K. This friend lives in the American South, is ex-military and often posts anti-Obama rhetoric, so I'm never surprised when he distributes items with a conservative bent. But I found it interesting that he'd latched on to a bit of propaganda based here in the U.K. Why does he care about U.K. politics?

To me, it illustrates how far-right and anti-immigrant movements are interlaced -- paradoxically, across international lines -- as well as inherently racist. My friend dislikes Obama, supports Trump (apparently) and now he's latched on to a political movement in a foreign country that preaches the evils of multiculturalism. To the best of my knowledge -- and admittedly I don't know him well -- he has no real interest in the U.K.'s internal affairs. But he's invested in the discriminatory ideology.

Maybe this connection is obvious, but frankly, I was surprised he even knows the U.K. exists.

Olga is sitting next to me watching starlings on our bird feeder. The starlings love the mealworms we put out, and they swarm the feeder en masse, the adults pulling out dried worms and feeding them to their nearly-grown chicks. Every once in a while a squirrel will dive into the mix and try to climb the feeder, sending everyone flapping. Our back yard is a hive of activity, and Olga is shaking -- she can barely stand the excitement!
Posted by Steve Reed at 7:22 AM

I think the fellow you are referring to is Hank. He's a buddy of mine on the "Trumping for America" forum. I will pass him a link to this post. Hank will be very pleased to discover what you have written about him and next time you are back in The States he will probably invite you round for target practice.

I keep hiding the friends who post things like that. I do have some Republican friends who are tolerable (they'll probably still vote for Trump, but their reasons are easier for me to understand).

So did you pick up that hat? You should have taken it home & had a photo shoot with Olga wearing it :)

We LOVE sitting out & watching our back yard - it's always vastly entertaining. Last night it was the doves - one of them pursuing the other one who was NOT interested. Better than a soap opera!

I do not understand people who only want to be surrounded by people just like them. how boring. everyone a clone of everyone else; everyone thinking, feeling, doing everything in just the same way eschewing diversity, demonizing everyone and thing else that is different. it's just sad.

I see things like that hat and think of the waste of human resource and then the space it will take up in the landfill and it sort of makes me sick.
Now backyard gardens- that makes me happy.
You know how I feel about your "friend."

For some reason the right wingers seem to be obsessed with the ideas they have. All common sense seems to leave them.

Makes me think of the reactions to the European Song Contest results (I know you watched it - I didn't). In Germany, the right wingers claimed that Germany lost because of Merkel allowing in too many refugees, in Britain some claimed that coming in second last was a punishment for the possible Brexit.

You want to cry and laugh at the same time. That people think the world revolves around their tiny brains.

I have a nephew exactly like your Facebook acquaintance. I had to block him on Facebook so I wouldn't see his crazy rantings. I love your description of how the hat got there. I can actually picture it!
It sounds like Olga wants to get out there and join the starling and squirrel action.

My Ginger loves to sit outside in a bed of spearmint, watching the bird feeders. She can do it for hours.

Birds don't excite her, she never chases them, but she keeps a careful eye on the squirrels--and occasionally catches one, much to it's misfortune.

Ah, crazy American Trump voters...I've blocked so many people on Facebook these days that you'd think I only had about 5 friends, looking at my newsfeed. I can't take seeing their nonsense on a regular basis.

Your blog posts are a pleasure to read - not just for their content but or the manner in which they are written...

I'm right in step with most of the comments today, however I do think the very least you could have done was to put that hat on and take a selfie with Olga grinning away beside you.

Thank you for that mental image of Olga - you made me smile on a day when I sorely needed it. And I am amazed to see what looks like someone sweeping the sidewalk. Does that really happen over there?!

Interesting comment about racist ideology crossing borders. It's all so depressing.

Bug: I don't hide them on the theory that it's good to know your (ideological) enemy. Even though he's a friend. Kind of. (He's really not a bad guy, just deluded.)

Ellen: I'm with you!

Ms Moon: I agree. All the plastic and the waste in the world just makes me crazy.

Red: They're just so angry, and at all the wrong people!

Sabine: I hadn't heard that about Germany's entry. Interesting! I actually DO suspect that Europe in general has no great love for the UK at the moment given our Brexit debate, but whether that influenced the contest it's hard to say. I thought UK had a pretty good act this year, but we never seem to do very well -- at least not for a long time.

Sharon: There's one in every family. :)

Jennifer: It's funny how dogs aren't as enthusiastic about birds. Olga isn't very interested in them, either, though she has been known to run through flocks of pigeons just to watch them all flap away. But squirrels just make her insane.

Ms Soup: Thank you! Unfortunately, I make it a firm blog policy never to post selfies. Even with fun hats. :) (Actually I have posted some selfies in the past, but never mind.)

Elizabeth: It IS depressing. I guess racists are racists, regardless of nationality.