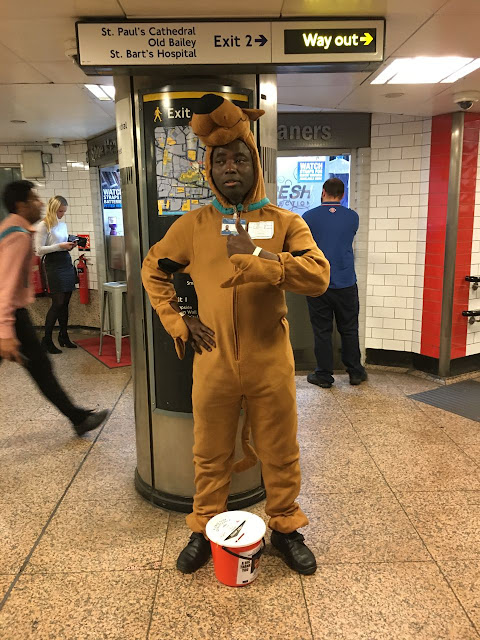 Yes, that is a man in a Scooby Doo suit. When I walked through the St. Paul's tube station yesterday, he was there raising money for some charity or other. I asked for a picture and gave him £2 in return. (By the way, this was shot on my new iPhone -- it's clear but definitely not as sharp as the big camera.) If I'd thought of it I'd have had him turn a bit to the side so you could see the black spots on his back.

What was I doing down by St. Paul's? Well, it's a long story. We've been trying to get five years' worth of student newspapers bound into volumes for the library archives. The binder we work with is located on Ludgate Hill, just a few steps from the cathedral. The papers have been stacked in the library for several weeks. I initially tried to get the binder to come to school and collect them -- allegedly they do delivery -- but that was proving to be a challenge. So instead I decided to just take them down there. I loaded them into an extra-large bag, lugged them via the tube, walked them past the cathedral and up a curving wooden staircase into a shop that could have come from Dickens -- a little room on the second floor of an old building, with stacked paper and binding glue and brushes in addition to more modern equipment, and windows open to the Autumn breeze. I showed the woman running the shop exactly what we needed and emerged, much lighter, onto the street, practically in the shadow of St. Paul's.

It was a fun outing. But the tube was crowded on the way back, and I had a college-age kid standing in front of me -- and every time the train started up he'd fall backwards, step on my toes and drive his backpack into my chest. It happened two or three times and I was about to tell him to HOLD THE HANDRAIL when the train starts, but then he got off. He was plugged into his music and never said a word to me. No "sorry" or "excuse me" -- nothing.

The woman next to me was reading a book called "Emergency Sex," which turns out to be more serious than it sounds. She was on the first chapter, "Condition Alpha." As you can tell, we were standing close enough that I could read over her shoulder.

Back home, the crane flies have once again been coming indoors in the evenings. In what has become my late summer and early autumn ritual, I chase them down and put them back outside, if I can catch them. Dave thinks I'm crazy, but he's used to it by now.
Posted by Steve Reed at 6:56 AM