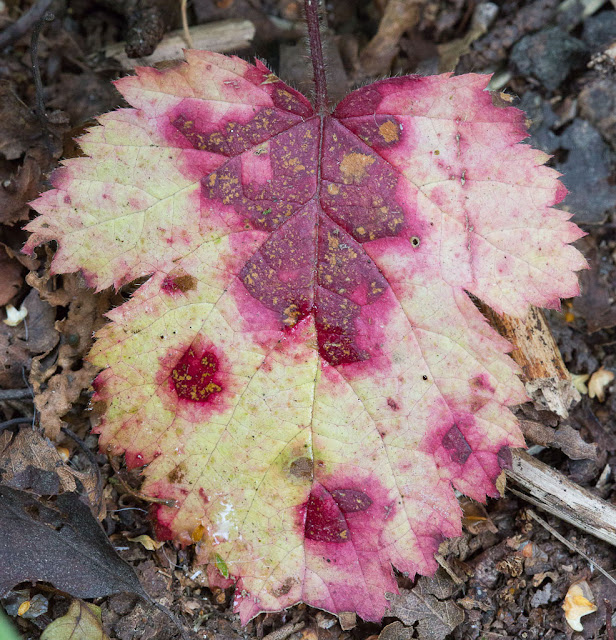 That's a dying blackberry leaf on Hampstead Heath. Isn't it funny how, beneath the green chlorophyll, a blackberry bush contains all this purple pigment? I guess it makes sense for a plant with such purple berries. And yet, other parts of the leaf are so pale.

Speaking of leaves, our venus flytrap finally gave up the ghost. Apparently being repeatedly dragged around the yard and urinated on by a fox just wasn't survivable. Oh well -- it lived longer than I ever expected it to when I bought it for Dave more than a year ago.

This morning I read a fascinating article in Newsweek (yes, it still exists!) about the problem of discarded clothing. I've always wondered how charity shops cope with the avalanche of used clothing they receive. (If you've ever had a glimpse into the back rooms of some of these shops, you know what I'm talking about -- towering piles of donations, as close to mountains as they can be in such a small space.) I'm a Goodwill and Oxfam enthusiast, as you know, but it turns out charity shops sell only about 20 percent of those donations. The rest goes into a clothing waste stream that sees it baled up and sent overseas to second-hand markets, or torn up for rags used in auto shops, or turned into carpet padding or floor mats for cars. The problem nowadays, according to the article, is "fast fashion," which produces lower-quality clothing that isn't as suitable for second-hand use. In short, it's an environmental mess.

(As I read the article, I thought of the clothes I salvaged from our neighbor's trash a couple of years ago and took to Oxfam. I wonder how much of that was suitable for resale? Our then-neighbors, a young couple, were likely consumers of "fast fashion.")

I, on the other hand, tend to hold onto my clothes for a long, long time. Probably too long.

Today is the day of our beginning-of-school student assembly, where the faculty/staff choir sings. Hopefully we won't make a hash of it, and the kids will remember the message of the song while evaluating our performance: All you need is love!
Posted by Steve Reed at 6:14 AM