A Crowded Train, and Oysterband 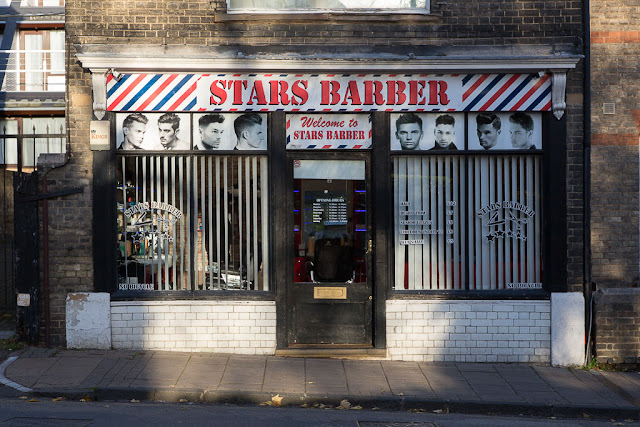 Well, we made it back to London in one piece, with no missing baggage or missing dogs or any other mishaps.

We got moving late yesterday morning, checked out of our hotel and arrived at the Cambridge station in plenty of time for our 11:18 a.m. train to London King's Cross. 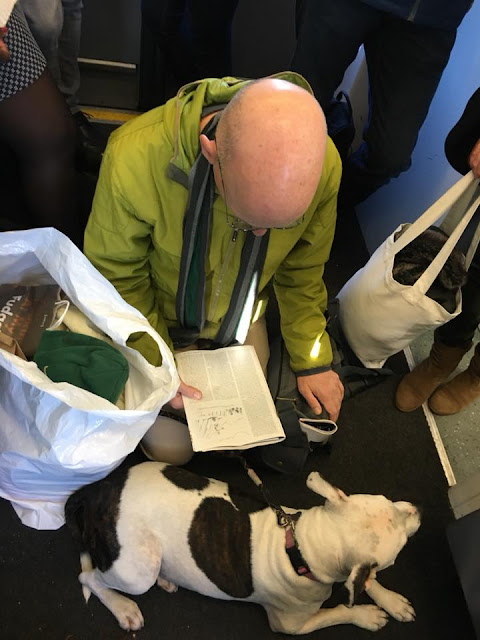 The train was incredibly crowded -- people were standing up and down the aisles. Dave took this picture of me sitting on the floor of the car reading The New Yorker. I was down there to keep the dog calm amid all the feet, but she did fine, actually. The guy behind me eventually sat down too.

We got back home and unpacked, and I ran laundry and raked up all the leaves in the back garden. I also discovered with horror that the aphids infesting our amaryllis had somehow spread to a little orchid we keep on the kitchen windowsill. It had been looking anemic for some time, and that's why! So I got out the spray and took it out in the garden and sprayed it, and then moved the amaryllis out to the garden shed, where they will overwinter. I thoroughly cleaned the area on the back doorsill where they'd been sitting.

I don't know how these darn aphids got inside. I haven't seen them on any other houseplants -- fingers crossed.

I moved the leafless fig tree into the shed, too. It's cold and frosty here now, and the more tender plants need some protection. 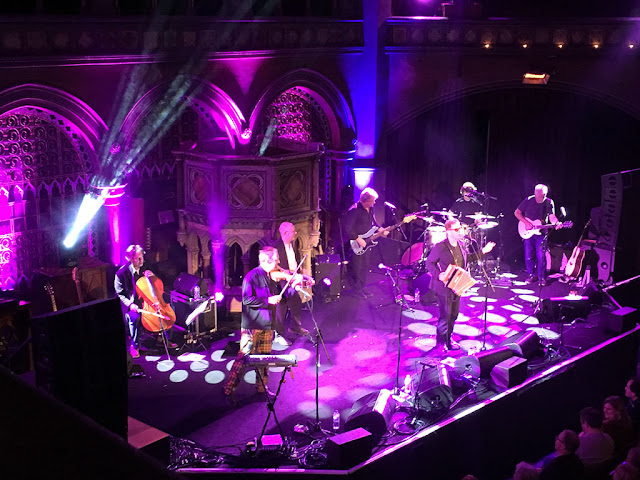 Then, last night, I went out with our friends Sally and Mike, their daughter Sorren and Sally's brother-in-law Steve to see Oysterband, a British folk-rock band, performing in a big church in Islington. (We met first at a pub called The Famous Cock, which you just can't resist laughing about, can you?)

I'd never heard this band before -- they're on their 40th anniversary tour, so with such staying power it's a safe bet they'd be pretty good. (Sally got me the ticket ages ago.) And they were very good. I joked with Dave before the show that I'd probably be hearing a lot of music with accordions and fiddles, and indeed that's what it was, broadly speaking. I could hear the roots of American Southern and Appalachian music in what they played -- some of it sounded like music you could square dance to.

We did no square dancing, however, and at the end of the evening I hopped on the Overground from Islington only to find that during the show it had somehow mysteriously ceased running for part of its length. I was forced to take a bus to get all the way home. But I lived.

(Top photo: A barber shop in Cambridge.)
Posted by Steve Reed at 7:16 AM