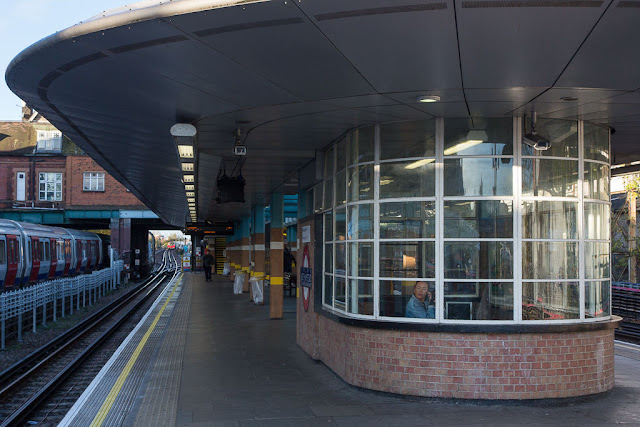 This is our West Hampstead tube station. I love the little waiting room with the curved glass wall, where that woman is sitting and applying her makeup. It's very deco, isn't it? I've never spent a moment of time in that waiting room -- I've never even stepped inside it -- but t's a nice architectural feature.

Yesterday was a busy day, but mostly routine. I had to call the local council office because, for some reason, an extra recycling bin has shown up in the alley beside our house. I swear, managing our trash bins is practically a full-time job. I suspect it's Mrs. Kravitz's and she doesn't want it anymore, so like any good neighbor (!) she's shoved it onto our property. We now have five bins, which is entirely too many, so I asked the council to take the extra one away. I'll put a sign on it so they know which one to take, and as fair warning to Mrs. Kravitz (or whoever owns/owned it) that it's about to disappear.

We had a couple of letters show up in the mail to previous tenants of our address. They seemed like they could be bills or financial statements or something important, so I wrote "Return to Sender" on the envelopes, circled the recipient's name and wrote next to it, "Not at this address." Then I dropped them in a post box on the way to work. I'm not sure that really does anything, but I learned many years ago that's the way to deal with misdirected mail. Do you suppose the post office actually returns it?
Posted by Steve Reed at 6:51 AM