A Litany of Ills 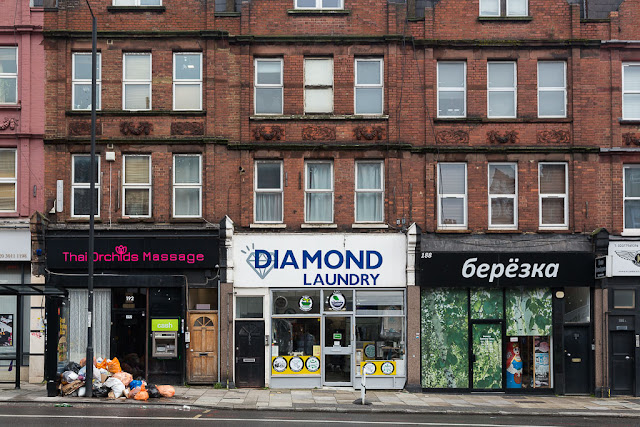 When I last photographed this laundry on Finchley Road, three years ago, it had plants in the windows and looked a little more homey. It also had completely different shops on either side. I miss the plants but I like this new lineup -- it's very international. The Russian shop is called Berezka. I've never been there but apparently it's basically a deli.

I went to the dentist yesterday morning to get my root canal checked out. Two years after it was originally done, I'm still having twinges of feeling in the tooth, and on my last exam they found evidence of lingering infection at its base. My dentist wasn't there at the time, though, so I was asked to come back and see him.

His conclusion is that there may still be a tiny bit of root at the bottom of the tooth that he was unable to remove because the channels were too narrow, and he said there are two options. One, I can leave it alone and let it clear up on its own, as he believes it will. Or two, I can have a procedure that involves going in through the base of the gum to clean out the infected area. That would require a specialist. Since I'm only having mild, extremely intermittent pain and there's no swelling, I'm inclined to do nothing, but he's getting me information on the second option.

And he didn't charge me for the visit. So there's that.

I had doubts about going to the dentist in the middle of our dreaded Covid-19 outbreak, but what the heck. Life goes on. Some people seem very freaked out -- I see paper masks being worn on the street and in the tube, and we're still cutting back activities and trips at school. Dave suspects the school might close.

I haven't made any changes in my own life, aside from washing my hands more regularly. (I'm already a pretty consistent hand-washer. Being a health and hygiene volunteer in the Peace Corps taught me the value of that!) My attitude, as I told someone recently, is that this virus is just one of about a bazillion things that could kill us tomorrow. In other words, life itself is risky -- you just have to keep living and minimize the risk sensibly.

I have a co-worker who's planning to go to Spain for Spring Break, at the beginning of April. She says she's still going, unless things change. I think Spain's had more cases than Britain, but I don't blame her. I'd go too -- just as I'm still planning to follow through on my trip to Florida. I guess the big danger with international travel is that we get caught in some kind of quarantine coming or going. I don't want to wind up living for two weeks in some warehouse in Tampa!
Posted by Steve Reed at 6:46 AM