Pigeons and the Dentist 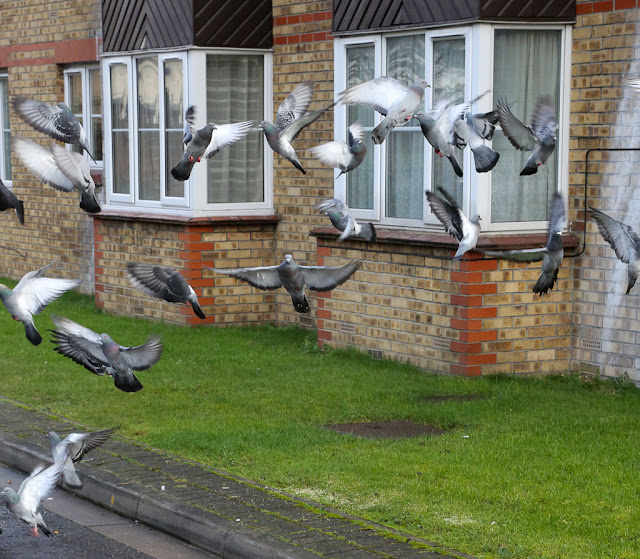 When I was combing through my old pictures on Sunday, I came across this one, which I really like. I took it in January 2015 while photographing streets for Bleeding London, and although I find it hard to believe I never used it on the blog, I can't find a post that includes it. So here goes!

Where are those pigeons now, I wonder? Are any of them still out there? According to Google, pigeons live six years in the wild, so I suppose some of them could be. They're probably retired, living in Florida or Spain.

I forgot to mention that Sunday's winds blew down part of our garden fence. Mrs. Kravitz has been on us for years to get the fence replaced, and you may remember that the landlords recently visited to take a look at it. They've decided to do some repairs but not to replace it, I think. Anyway, the wind blew out three of the clapboards in one panel, so yesterday I stopped at the hardware store and bought a pack of nails, and I told Mrs. Kravitz I'd fix it temporarily. I couldn't get to it last night because we were having more rain and wind -- plus it was dark by the time I got home -- but maybe this weekend.

I also went to the dentist yesterday for a check-up. I've been having twinges of pain in my back tooth, where I got a root canal and crown about two years ago. The dentist said there's still evidence of infection in the bone beneath the tooth, so I have to go back again in a couple of weeks to see the same dentist who did the root canal and see what my options are. It's not bad pain and it's extremely intermittent, so I'm inclined to just leave it alone, unless it's going to have negative ramifications for my health otherwise.

I've said it before and I'll say it again -- this tooth is the bane of my existence. It's out to get me.

Anyway, I also needed a cleaning and fortunately they were able to squeeze me in right away, so at least I got that done. All my other teeth are in good shape, thank goodness.
Posted by Steve Reed at 6:42 AM