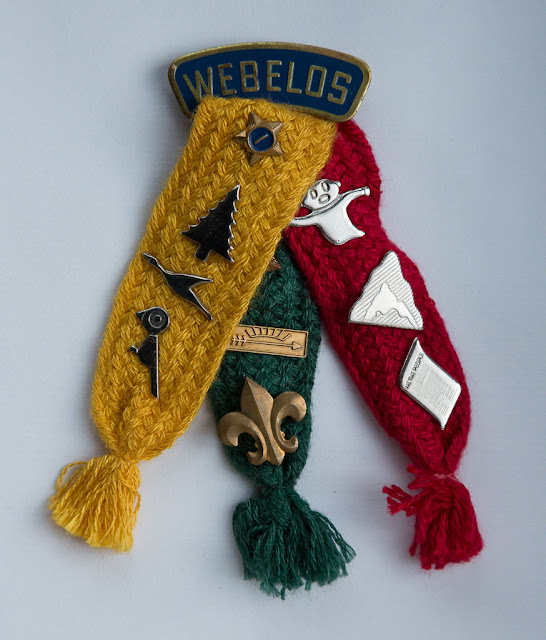 When I was going through a box to retrieve my political buttons a couple of weeks ago, I came across all this stuff too -- souvenirs from my days as a Cub Scout and Boy Scout. I enjoyed being a Cub Scout and a Webelo, which are groups for younger kids, but as I got older the appeal of scouting waned for me. Still, I saved a few reminders.

These tassels were made to hold all the pins we could earn for achievement in various subjects. I have pins for forestry, nature, drama, geology and government. God only knows what I did to earn those pins. I had big rock and leaf collections, so I'm sure those were factors. 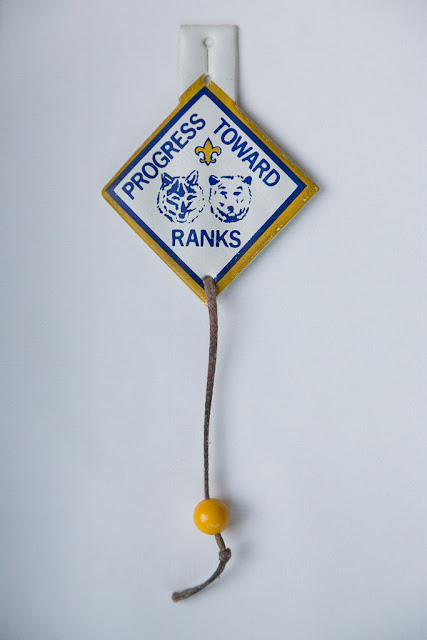 As I recall, Cub Scouts were divided into groups depending on age and achievement. The groups took the names of various animals like wolves and bears. (I have to issue a full disclaimer that I don't remember a whole lot of this and some of it may be different now, anyway. I was scouting in the mid- and late '70s.)

The doodad above (not its official name, I'm sure!) used to hang from a button on my uniform. We were supposed to collect red and yellow beads for various activities and achievements that, I think, eventually would lead to a new rank. I remember other kids having lots of beads. I must have been an underachiever. 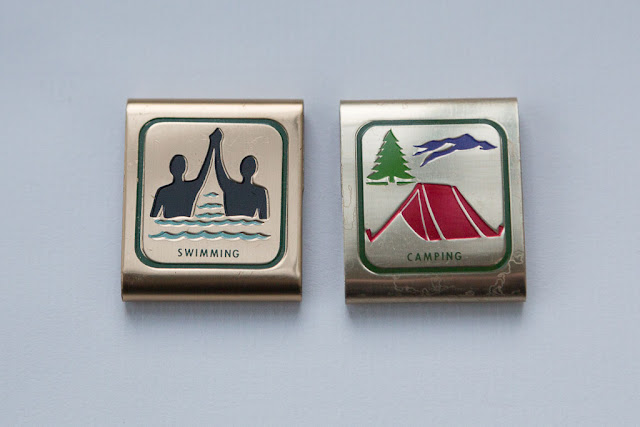 These things slid onto the uniform belt, showing proficiency in certain activities. I earned these during a camping trip, I believe to the Withlacoochee State Forest. I remember swimming in the river and, later, lying in a tent being gnawed by mosquitoes, wondering why the heck I wasn't home in my own bed. I drew a picture of the moon in my journal, covered by filmy clouds. (I no longer have that journal, but I distinctly remember that moon.) 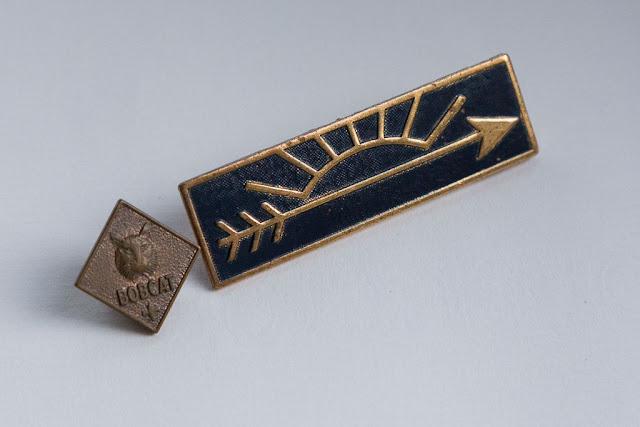 As I recall, the Arrow of Light was the culmination of our Cub Scout career, pointing the way to the Boy Scouts. This is my Arrow of Light pin. I don't know what that Bobcat pin was for. 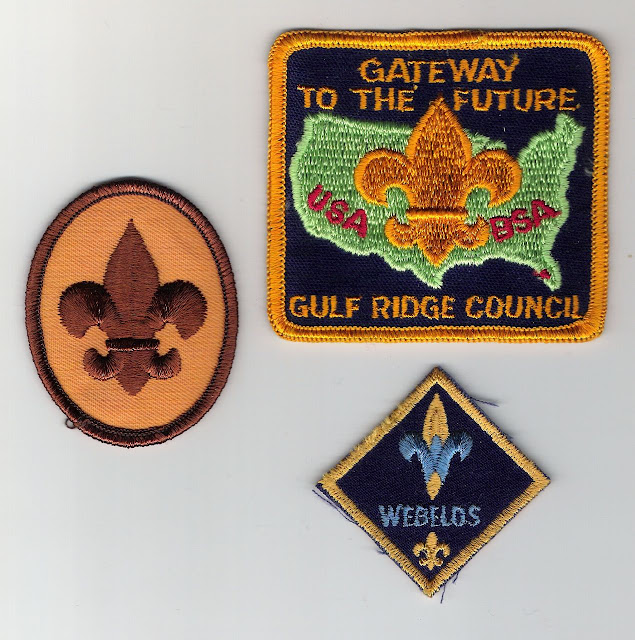 And of course there were plenty of patches, of which I saved only a few.

Cub Scouts was a fairly stress-free time for me, because kids at that age are pretty harmless. But when I moved into a Boy Scout troop, scouting got stressful. I was in a troop with mostly older boys who used to torment me and a couple of other kids my age. The scoutmasters took a very hands-off, "boys will be boys" attitude toward it all, but nowadays we'd call it bullying, plain and simple. It was both verbal and physical, and it eventually drove me out of the group.

We'd been selling donuts and doing other things to raise money for a big trip to the Grand Canyon. I did my part, but as the trip date got closer my mom could tell I was stressed about going, and she finally called the scoutmaster and told him I was staying home. I'd been looking forward to seeing the Grand Canyon, but deep down, I'd never been more relieved. Mom said I was 100 times more relaxed after we canceled, and soon after that I quit the Boy Scouts altogether.

I don't know what ever happened to my scout uniforms. I think my Cub Scout outfit went to my brother, who also did Cub Scouts, but the Boy Scout uniform, I'm not sure. Scouting sure does generate a lot of paraphernalia. Before my dad died we were going through his stuff and he had a scout uniform from his childhood, also covered with patches and badges -- useless trinkets, tangled up with memories both good and bad.
Posted by Steve Reed at 6:52 AM