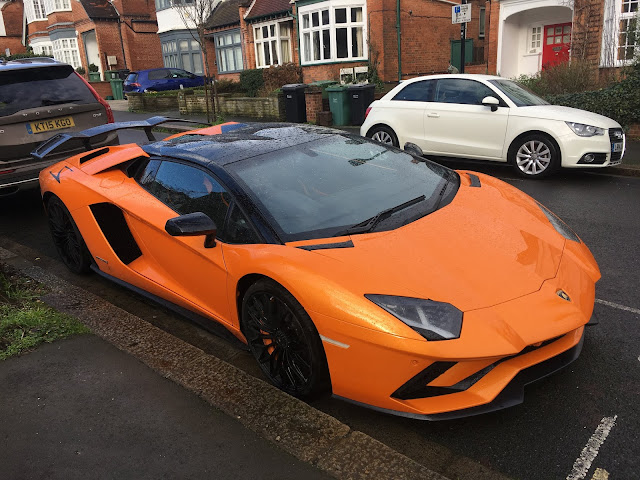 I have more (hopefully) curious or interesting photos saved up on the ol' iPhone. Here's some of what I've been seeing in recent weeks.

First, this magnificent Lamborghini has been parked on our street. The last time I saw it, it wasn't even in a space -- just planted by the curb. I think if I owned a car this expensive I wouldn't be leaving it streetside in seedy London neighborhoods like mine! 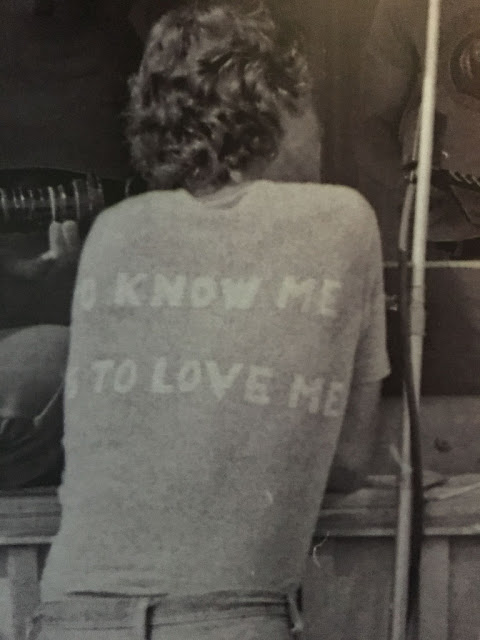 This is a photo of a photo. When I went to the ABBA exhibit in mid-January, there were many old '70s images of the band exhibited on the walls. This guy was a friend or roadie, and I got a kick out of his shirt, which looks like he stenciled it in his garage. 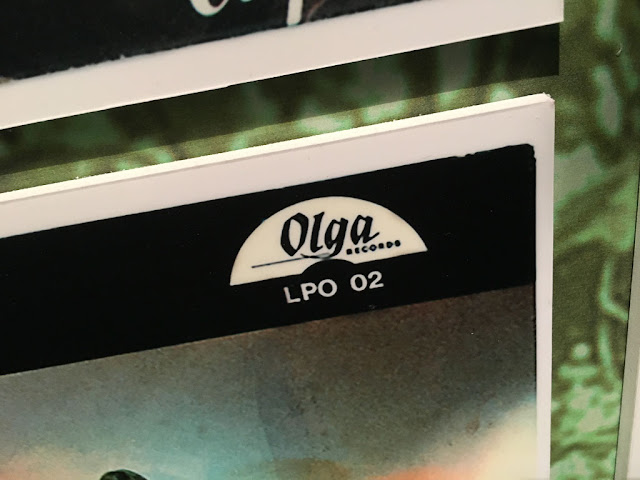 Also from the ABBA exhibit -- Olga was one of the band's first record labels! Isn't my dog due royalties?! 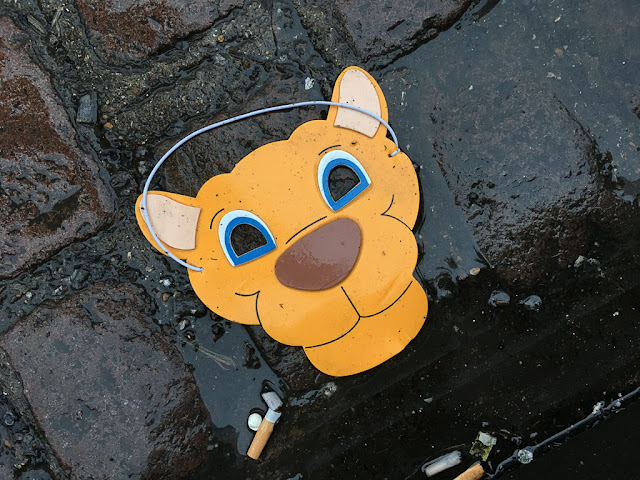 A rubber mask found lying in the street one rainy morning, outside the pub. There was an elephant too. Guess someone had a wild party. 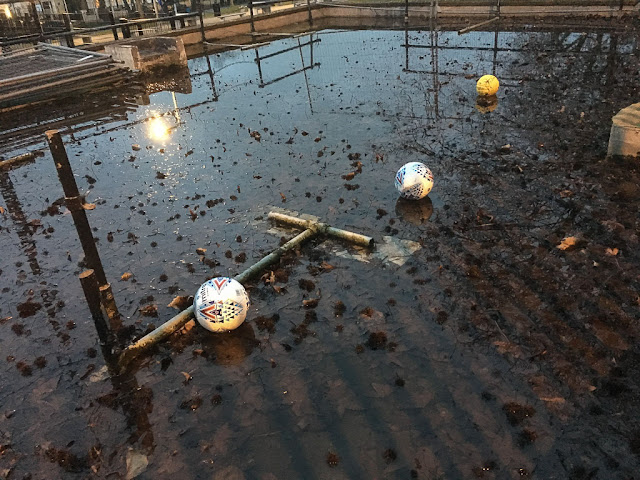 Lost footballs on a rooftop at a school in St. John's Wood (not the one where I work). Seems like they need to figure out a way to drain rainwater off that roof! The drains are probably clogged with all those leaves. 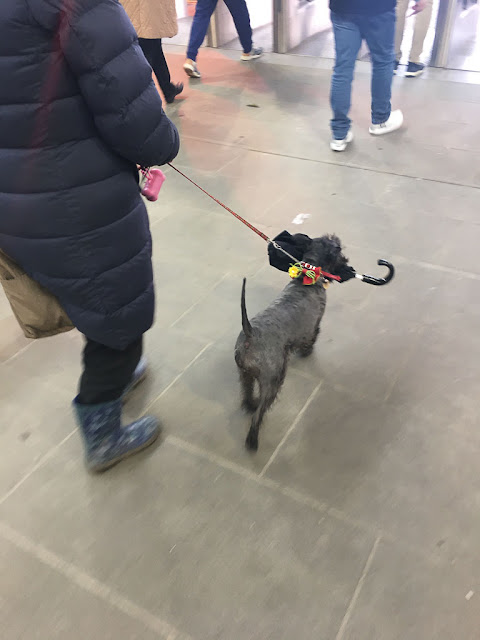 I encountered this woman walking her little dog through the Overground station, an umbrella in its mouth. This was the best picture I could get considering we were all on the move. 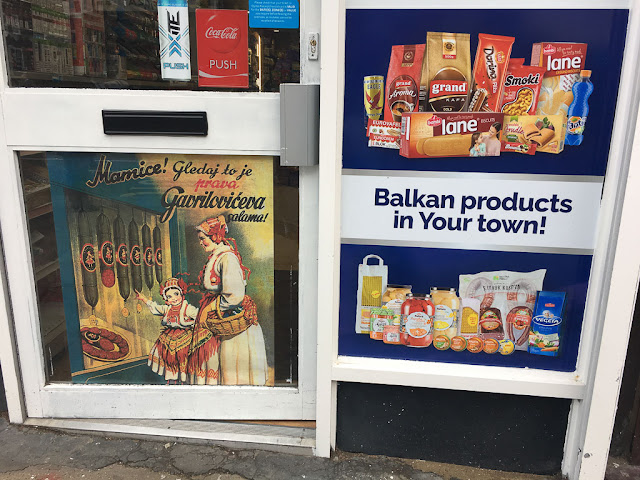 The high-street grocers replaced their broken window and got a new Croatian sausage poster. Do any of you watch the Netflix show "Schitt's Creek"? We're enjoying it a lot. We paused it several nights ago and happened to catch Moira in this pose, which seemed to capture her character perfectly. 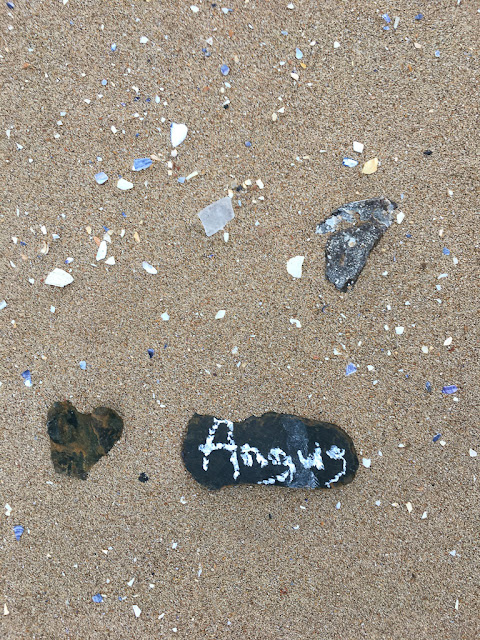 When I was at the beach last week I happened to spy this rock, signed by someone named Angus. The chalk from the cliffs is easy to write with -- just like regular chalk -- and I guess any hard, dark surface makes a good blackboard! 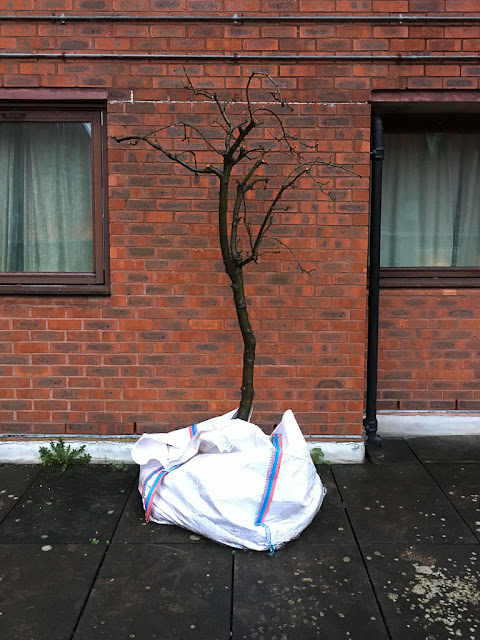 Someone living in the nearby housing estate has this tree standing on their patio, in a bag. It's very strange, because they live in an apartment and seemingly have nowhere to plant it. I'm not sure what it's doing there. (And no, I am not going to save it. There are limits to my powers.) 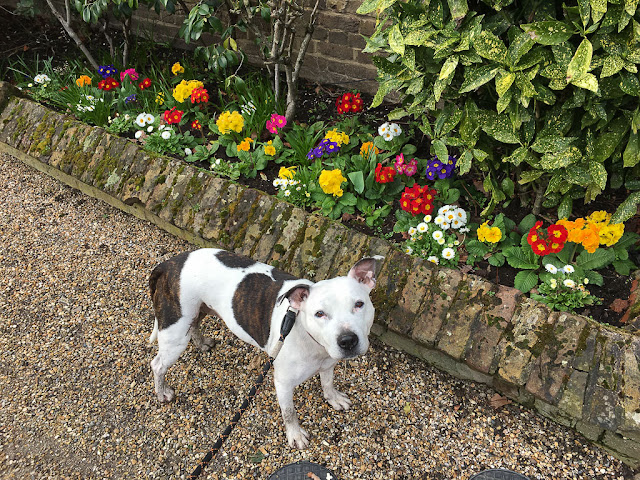 Finally, Olga with primroses, on our walk on Saturday.
Posted by Steve Reed at 6:48 AM