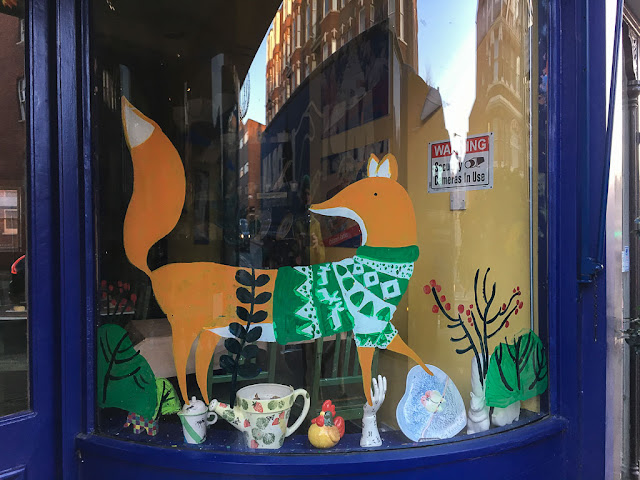 I did reschedule my dental appointment, you'll be glad to know. (If you're at all concerned about maintaining the health of dentists.) Fortunately this appears to be a very mild cold, so by the time I'm supposed to go next Monday I should be fine. Insha'allah, as the Arabs say.

Meanwhile, here's another collection of random photos from my iPhone!

First, the ceramics-painting studio in West Hampstead is sporting some fun wintry fox art on its front window. 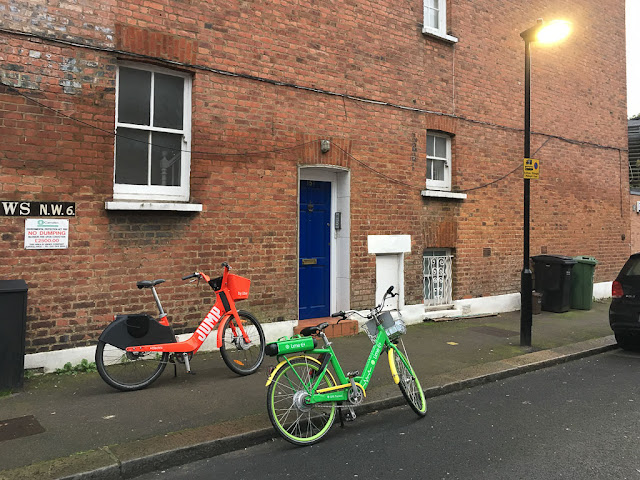 Hire bikes like these have created some local controversy. They're rentals that can be left anywhere to be picked up by the next person, who locates and pays for them using an app, as I understand it. (I've never used one.) They've been a source of complaints because they're often left standing in the middle of the sidewalk and other inconvenient places. We had one parked right in front of our flat for a while, but it disappeared pretty quickly. They are colorful, I'll give them that. 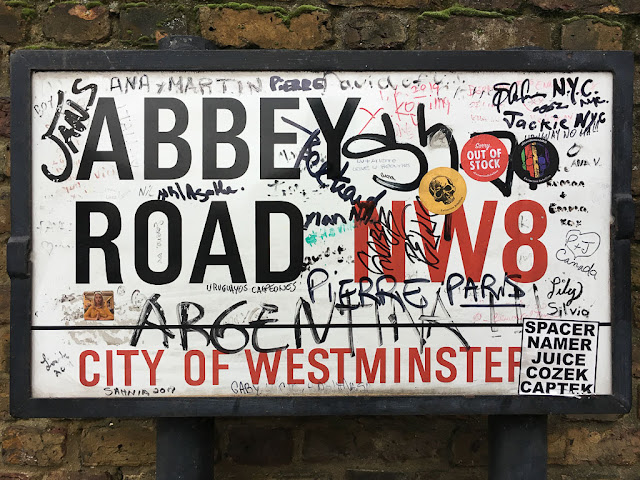 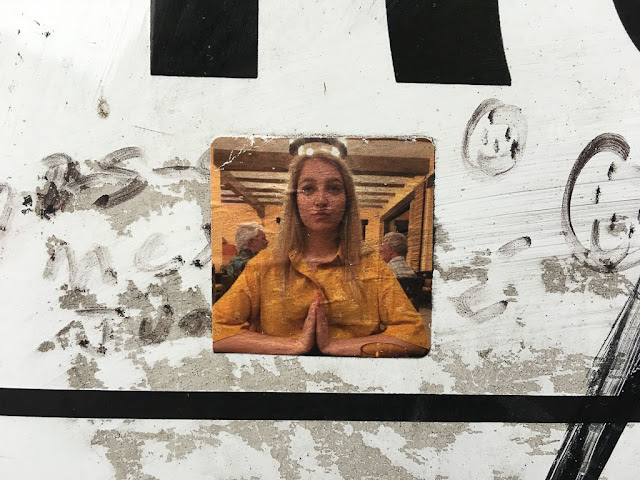 And who's this woman on a tiny sticker at lower left? Could it be...Lady Madonna? 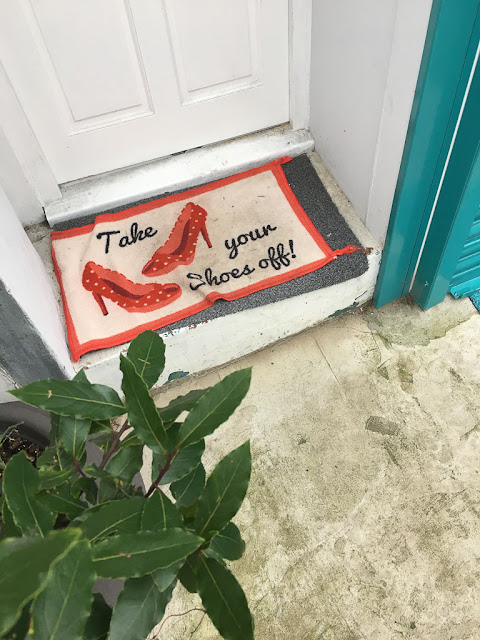 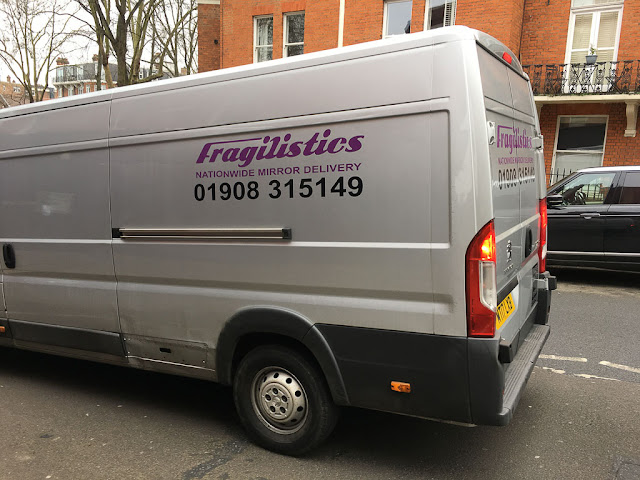 It's interesting that there's an entire business devoted to "nationwide mirror delivery." Talk about a niche market! Clever name, though. Very Mary Poppins. 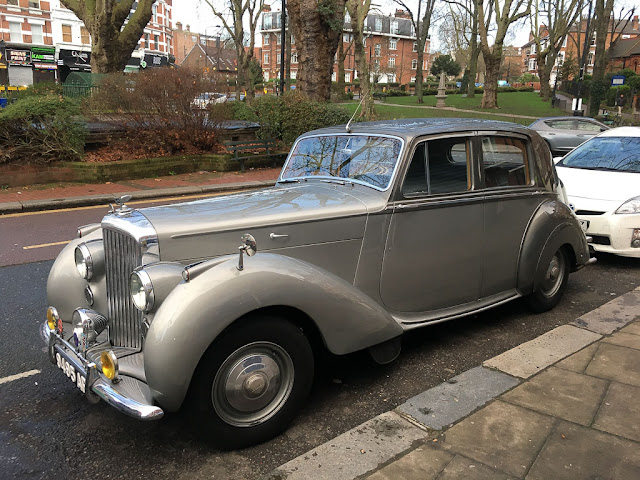 A swanky car parked in West Hampstead. I think it's a Bentley? 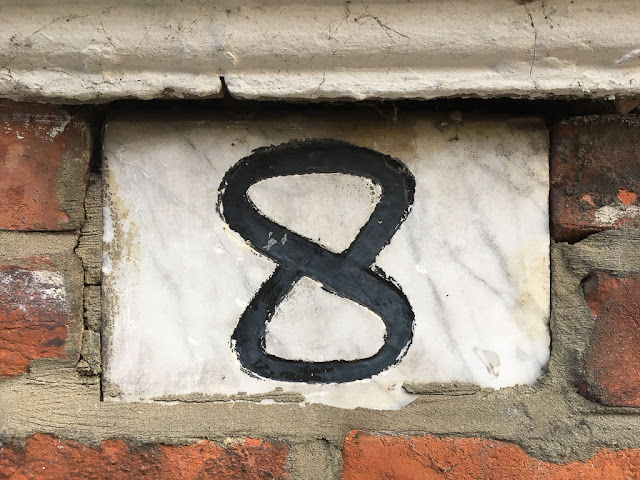 I'm always on the lookout for unusual house-number plaques, like this one in South Hampstead. 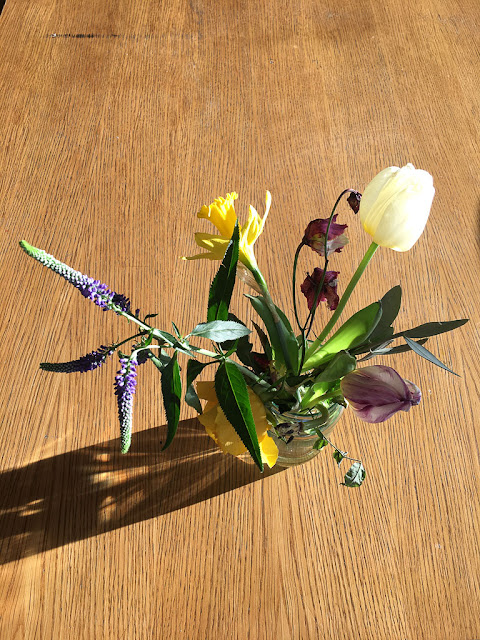 And finally, another bouquet -- this one a rather motley collection of flowers left on a table at work. Sunshine makes everything better, doesn't it?
Posted by Steve Reed at 6:21 AM

A great collection of shots. That door mat (towel) is for visiting flamenca dancers.

I have a much less stylish door mat: a thick brown brush mat with black lettering that simply says, "Wipe your Paws".

As always- I love the iPhone pictures! That sassy fox made me smile. As did "Lady Madonna."
I'm glad your cold doesn't seem to be so bad.

clever picture of Ms Madonna. and the flowers look like they were picked from someone's garden.

Those rental bikes are creating the same problem here along with the rental scooters. However, I must admit it has gotten better over the last year. I don't see as many on the streets as when the first arrived on the scene. I love the name of that mirror delivery business. That's a nice looking van too. It makes me think that niche business must be profitable. Great selection of photos.

I see the bikes are e bikes and they are cool. Since you're not pedaling the remain stable and don't wobble from the pedaling.

I believe you're correct that that car is a Bentley. Gorgeous. So are most of your other photos.

The rental bikes and scooters are a plague everywhere. I like the idea of rental bikes which might give us fewer cars, but the execution of the business has not been great.

Glad you are starting to feel better. Another great collection of photos. Thank you for that.

I'd never have thought to call the dentist and ask for guidance on keeping or not keeping the appointment. Sounds dumb, I know, but I wouldn't have. Thanks for the common-sense idea!

A wonderfully varied selection of photos. Hope the cold is over soon, and that Dave is also recovering well.

I love the photos, especially the ceramic painting shop. I used to have my own ceramics store where we held so many wonderful classes. Decorating the windows was a favorite chore of mine. You have a wonderful day, hugs, Edna B.

Fun photos! My favorite is the Fox. My mom's maiden name was Fox (oops - should I be telling you this?), so I always like to see Fox things :)

Great photos! I would like a ride in the Bentley. I wonder who owns it?

Mitchell: They ARE flamenca shoes, aren't they??! Maybe some dancers live there. (In which case I feel sorry for the downstairs neighbors.)

Mary: Ours is even less stylish than yours. It's just brown and says nothing!

Ms Moon: I loved the fox too, and yes, Lady Madonna was worth a laugh. I guess whoever took the photo noticed the light fixture and that inspired the pose.

Ellen: They do. I should not have described them as "motley."

Sharon: I think there's probably a move afoot around the world to regulate them a little better. I could understand that.

Red: You're so hip! Are you pedaling around Red Deer on an e-bike? :)

Catalyst: Thanks! I have no idea where that Bentley came from. Haven't seen it before or since.

Allison: We have some here in London that have to be "docked" in order to be turned in, and that helps control street clutter by concentrating them all at docking stations. I think these bikes that can just be left anywhere are probably not a good idea. (Seems like a lot of them would get stolen or vandalized, too, doesn't it?)

Robin: I'm getting there. Coughing today but I feel like the cold is on its way out.

Jenny-O: I know, right? I agonized about it and then thought, "Well, why not just ASK them?" They deal with this stuff all the time, after all.

Edna: It looks like a cool little business. You can reserve a table, have a drink and paint your own ceramics. I'll have to try it one of these days.

Bug: I think you've told me that before, actually! I have a friend in the states who collected foxes for a while, but like many collections his eventually got ridiculously large and he had to thin the herd -- or the pack.

Penelope: No idea! I don't think it's a regular in the neighborhood, at least not on the high street.