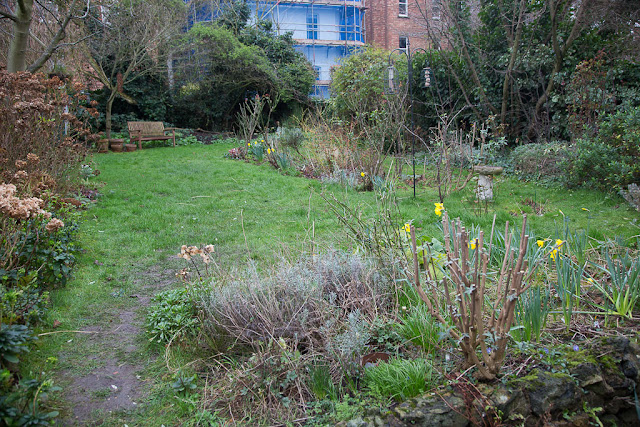 Yesterday morning was relatively calm, weather-wise, but we knew wind and rain were coming. So we took advantage of the stillness and got some things done.

Even before breakfast we were pruning in the garden, and we finally got the roses and the buddleias cut back (above). Dave left some height on the roses, which were already budding pretty vigorously -- hopefully cutting them back now hasn't done any damage. I'm not too worried. (The landlords told me some of these rose bushes date back to the 1920s!) We cleared five yard-waste bags full of trimmings.

I also repotted the dying/dead ficus tree. Still no sign of any change there.

And finally, I fixed the weatherbeaten fence between us and Mrs. Kravitz. I took a hammer and box of nails over and pounded in probably way more than were necessary, but I'll be darned if I'm going to have holes blown through that fence again. I'm sure Mrs. Kravitz, who wants the whole fence replaced, is grumbling.

Now, despite heavy winds all night, the fence is still intact. I just went out and checked.


Of course we had some fun yesterday too. Dave made french toast for breakfast, an unusual treat, and then I took Olga to the cemetery despite the rain. I made a little video of our experience. You'll see Olga:

You'll also see some of the already-blooming trees in the cemetery, and one of its more notorious headstones. And you'll hear some of Olga's nicknames, which include Oglie-Boglies, Crazy Girl, Crazy Beast, Beastie-beast, Beastmaster, Screwball and, in recent years, Sergei Screwball.

Finally, I included some clips of her post-walk bath, because I wrote recently about how she behaves in the tub. Of course this was the one day she didn't get in the tub on her own, but I swear she does sometimes.
Posted by Steve Reed at 6:26 AM