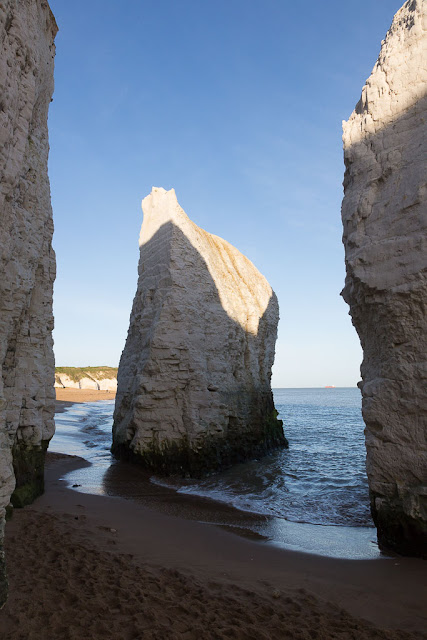 I got back to London yesterday, after a rather exhausting, cold morning of beachcombing. Once again, I found nothing much -- just some foil packaging, some rusty nails and an aluminum can (the latter without the aid of the metal detector).

I picked it all up and took it back to the hotel, where I threw it in the trash along with Tuesday's finds.

I'm still not sure about metal detecting -- it seems like a lot of work for very little gain. But all was not lost, because it is a beautiful stretch of beach, beneath chalk cliffs. (It's not far from the famous white cliffs of Dover.) I compensated for my disappointing finds with some rewarding photography. 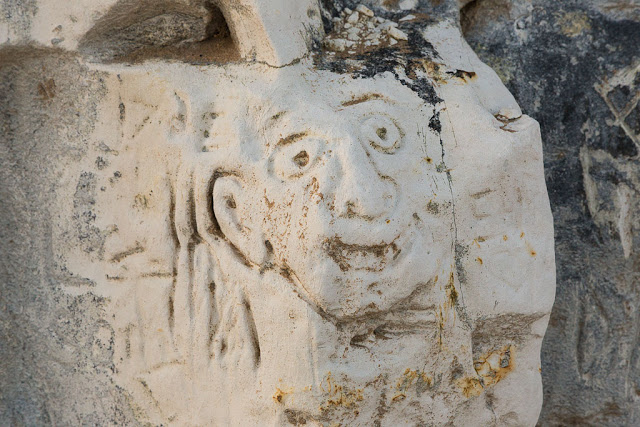 I found some fun graffiti scratched into the chalk. I'm sure this is against someone's rules, but fortunately the rock is pretty soft, so I imagine it wears away before too long. 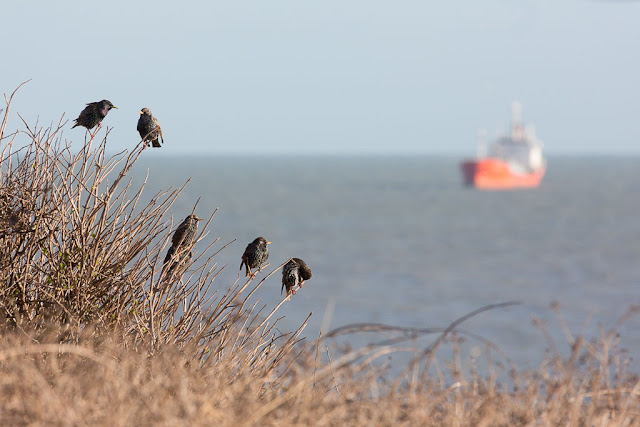 And I saw some wildlife -- mainly starlings and sparrows. 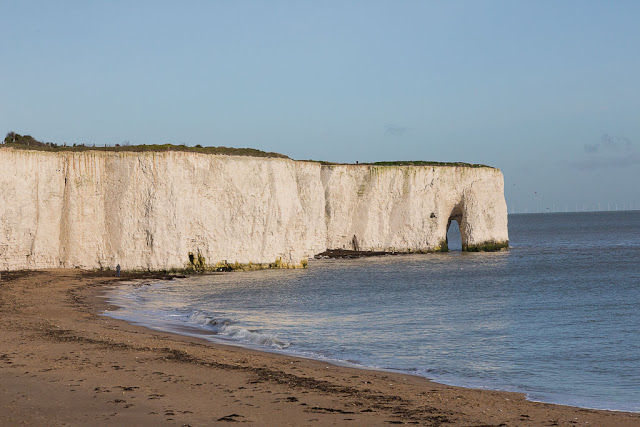 It's interesting how the chalk gets eroded into unusual pillars and arches. 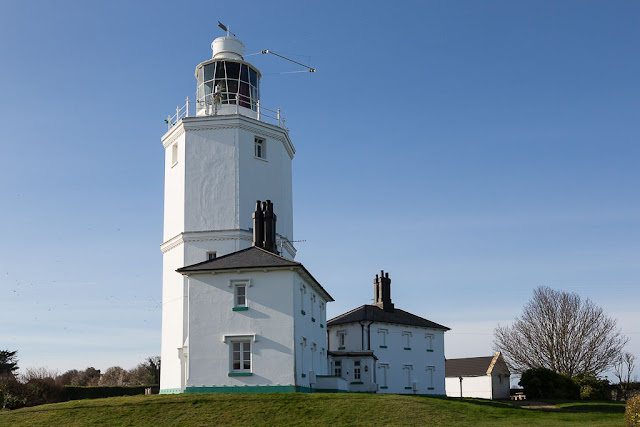 Finally, after breakfast, I checked out of my hotel and walked back to central Broadstairs. Along the way I passed the North Foreland Lighthouse, built in 1732 and altered to its current appearance in 1860.

It was a lengthy walk back into town, but scenic, and except for the fact that I was carrying my metal detector (which isn't heavy, but it is unwieldy) I enjoyed it. I caught the noon train for London and got back about 2 p.m. Dave was home but I wasn't reunited with Olga until 4:30, when she returned from her outing with the dog walker. 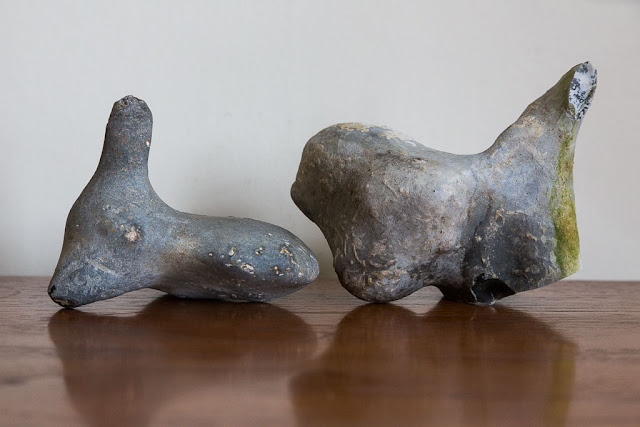 These are my only souvenirs from the trip -- two strangely shaped pieces of flint, each about the size of my fist. Aren't they cool? Like nature's own Henry Moore sculpture!
Posted by Steve Reed at 6:41 AM

Chalk and flint go well together and those are lovely pieces. I have a similar "sculpture" that I found beneath the chalk cliffs of Flamborough in Yorkshire. I also admired the picture of the birds on the clifftop with the blurry ship beyond. Sounds like the beach walk was the best part of your little trip. Regarding the metal detector, I wonder if you could source some practical advice or education - perhaps join an archaeological search club or something.

Those flint pieces are works of art! Great photos.

I love your photos, especially the first one. Any day you can get great shots like this is a good day. Your treasures are really quite interesting. Nature sure is a wonderful mystery. You have a super day, hugs, Edna B.

Your flint "sculptures" look to my eye to be a rooster and a hen. Can you see that?
What amazing scenery!

Good photos and a great find in those flint "sculptures". Glad you were able to make it a fun trip. As for carrying the detector, perhaps you could modify something like a guitar/luggage strap for it so you could carry it over your shoulder.

Must admit, the sight of the white cliffs of Dover always affect me. When we moved from the UK to Germany (early 1960s), the only way to cross the channel was by the ferry. We frequently came back to the UK to see family so I developed the custom of standing outside as to close to the bow (or the stern) when we were coming (or going), just so I could watch the cliffs until they were in (or out) of sight. Didn't care about the weather. Just wanted to watch the cliffs. They still hold a great deal of symbolic meaning for me.

Your finds have the look of Henry Moore sculptures. Maybe you can pass them off as early "studies" of his!

The beach is so beautiful there. Looks like a great place to go "detectoring" and enjoy the scenery. Love the photos.

I love all of your photos. I think Mike & I need to plan a beach trip SOON.

I think your flint pieces are a great find. the other stuff was just junk but who knows? someday you might find something very surprising.

excellent photos. you have such a good eye. Those white chalk formations are pretty amazing.

Olga out with the dog walker, does Dave not walk Olga?

You got some great photos. It looks like a nice sunny day in spite of being cold. Those flint "sculptures" are pretty cool. Did you happen to see the NY Times article about something called Mudlarking along the Thames. The story talked about how people find things like pottery shards and ancient coins when the tide is low. Here's a link to it in case you are interested.
https://www.nytimes.com/2020/02/12/world/europe/london-thames-mudlarks.html

Love the flint sculptures. They really do look like the work of Henry Moore. That's a beautiful beach you went to. I am continually amazed at the places you can go on the train in so little time.

Well, at least you had an outing. And those sculptures are lovely, very much like Henry Moore's work, as you say.

The flint pieces are worthy objets d'art! I think your trip to the beach was quite worthwhile.

The chalk cliffs are striking. And now you've preserved someone's carving forever in your photo :)

YP: Maybe later I can think about joining a club. I just don't have the time at the moment. I'm already in a photography organization, and I don't take advantage of that membership at all!

Edna: It IS amazing what nature creates. Looking at those pieces of flint, I couldn't even begin to imagine how it got worn down into those shapes.

Ms Moon: I love your interpretation! It says as much about you as about the rocks, I think. :)

Mary: Clearly many people feel as you do, given the fact that a song was written about them and their prominence in British folklore. I've never taken a ferry across the channel -- that would be a cool experience.

Robin: It is a beautiful stretch of coast, and not all paved with condominiums like in some areas.

Bug: The beach is always restorative!

Red: They were a good find, weren't they? I'm quite happy with them.

Ellen: The dog walker saga is a little complicated. She goes with a dog walker every day while we're at work. But they charge us a small fee to "hold her spot" even if we cancel her walks. So when Dave and I are home on breaks, we still let the dog walker come and take her out, since they're going to charge us anyway. Does that make sense?

Sharon: Yes, I saw that story! A great read! I'd love to do some mudlarking but you can't do it without a license, and I haven't worked myself up enough to try to apply for one.

Allison: It's a small country, when you come right down to it.

Catalyst: Yeah, it did me a world of good to get away even on a short trip.

Briony: Surely there are similar ones down your way? (Although I remember everything in Brighton being very round and pebbly.)

Jenny-O: I agree. I'm glad I went. That carving cracked me up. It says ER next to it, and I wondered if it's supposed to be the Queen?!