Catalyst, over at Oddball Observations, did a recent post about his collection of political buttons. It made me wonder which buttons I still have. I dug these out of a box in my closet. A wide political spectrum, right?!

The Nixon button I bought at a flea market in the '80s, as kind of a joke. I've never had anything but antipathy for Nixon, although he looks like an upstanding citizen compared to what we have now.

The Reagan/Bush button is the real thing. When I was in high school (I graduated in 1984), I considered myself a Reagan supporter. I can only chalk this up to political naiveté. I think I was most impressed that the Iranian hostage situation was resolved almost the moment he came into office. (Which later led to questions.)

I remember supporting Reagan in discussions with my friends around that time, but when I went to the polls that November, I voted for Mondale. I realized at some point that I wasn't a Republican after all! My roommate was stunned. Ah, youth. 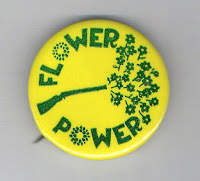 In 1988 I campaigned for Dukakis and Bentsen, whose button you see above. I also campaigned for Steve Pajcic, a Democrat who ran for governor of Florida in 1986. (I used to have his button but no longer do.) Both lost. Oh well.

I guess the anti-Bush and pro-Obama buttons are self-explanatory. I used to have a Hillary Clinton button from her Senate run in New York in 2000, but it appears to be gone.

My favorite button is this one (above left). It's an authentic vintage '60s "flower power" button, which I bought at the same flea market where I got the Nixon button. I only wore it once, as far as I can remember, when I dressed as a rather over-the-top hippie for Halloween in 1984: 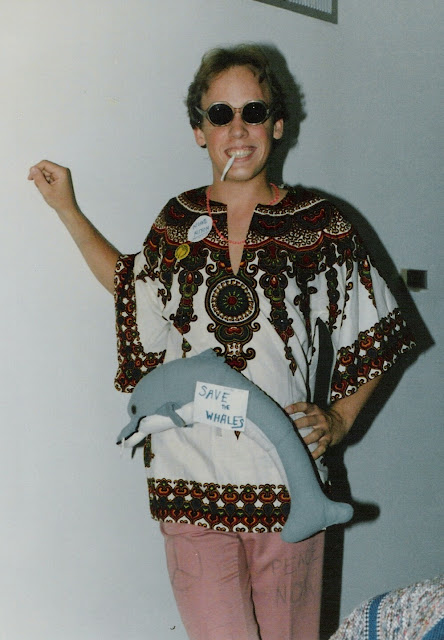 Don't you like my dolphin? Her name was Myrtle. She came from Goodwill, along with the beads and clothes and groovy (?) shades, and everything went back there again not long after Halloween. The joint wasn't real, I swear. (Myrtle has a joint, too!)

Anyway, we had some drama because I went to a graveyard with some friends that night, and I dropped my "Flower Power" button. When I realized it later, I made everyone go back and help me find it. Which we did.

I'll say it again: Ah, youth. I kind of wish I still had that dashiki.
Posted by Steve Reed at 6:59 AM

Ahh, the wonders of the past! Always love hearing people's back stories. It is the past that makes us who we are now. Have you thought about writing your own autobiography? Illustrated of course. I am sure it would make interesting reading. I would even buy a copy.

I had a couple of caftans like the one you are wearing way back, lol
Briony
x

I love the fact that you and Myrtle BOTH have a joint! Hahaha!

I love that you switched party affiliation in midstream, as it were. Thank goodness you did or we'd never have become friends.
My ex-husband, who was a musician, used to joke about playing at "spay the whales" benefits. Musicians are always being asked to play (for free, of course) for one good cause or another. He did have a very funny sense of humor. Still does, actually.
And although I was a hippie, I never owned a dashiki. It never occurred to me that I should.

I read your link about the October surprise. Some things never change.

You look great as a hippy in 1984, I realized as I looked at the date on the photo that I was already a mama then.

I also didn't realize it was supposed to be a joint, I just assumed it was a cigarette. Truly naïve.

I wish I still had the buttons I wore back then. I so love seeing the ones you still have. I most love that photo of you from back then.

The Micro Manager has a huge button collection. We've gotten rid of it. An antique business took them all.

I'm a little disappointed that was just a halloween costume. and look...hair! I read some time ago that the release of the hostages was already a done deal arranged by Carter but the Iranians didn't want to give him credit and so they waited until after Reagan was in office.

I think my favorite is the Flower Power pin and I love that photo of you. Very hippie! I had some pins back in the 60's and 70's but they are long gone. After that, I don't think I ever got any political pins at all. I did switch back and forth between Republican and Democrat many times in my youth. But, not in the past 25 - 30 years. The Republicans have ruined their party.

I think the fact that Reagan took credit for the release of the hostages really spoke to the darkness of his soul. He had nothing to do with it. Even then the Republicans were moving towards the dark side.

My 8th grade school photo shows me wearing a small LBJ button. No idea what happened to it. Think that was the last time I wore anything political, although my party affiliation never changed.

I like your flower power pin and that top. I actually have a couple dresses styled similar to that top. You have a great day, hugs, Edna B.

Awesome hair! And I love that Myrtle has a joint too :)

"Ah, youth" is such an incredibly useful phrase. Covers so much :)

David: I appreciate the vote of confidence, but that would be the most boring book ever! LOL

Briony: It looks comfortable, but as I recall it was almost entirely Polyester.

Jennifer: Taking it to the next level! LOL

Ms Moon: I think many school-age kids don't really understand politics, so when I hear them espousing one perspective or another I always give them the benefit of the doubt. I certainly evolved once I became more aware.

Lilycedar: Ha! It's weird to think that I was dressing as a hippie just 15 years or so after hippies were "in." It seemed like ancient history even then.

Robin: It's a funny photo. One of my better costumes. :)

Red: Well, at least you didn't throw them away. Someone will want them!

Ellen: Yes, I did have hair at one point, although it was always pretty thin. The hostage thing certainly enabled Reagan to enter office on a triumphal note.

Sharon: I had some other pins that I sold, like Red, at a yard sale. Not political ones, though. Some of them were buttons with the cast of "Laugh In" on them -- they'd probably be worth something today!

Allison: Yes, they were. They were reeling after Watergate and then Falwell founded the Moral Majority and they were reinvigorated with malign energy.

Edna: I think I actually wore that top a few times in college. I kept it longer than the rest of the costume, which went back to Goodwill right away.

Jenny-O: It IS a very useful phrase. You can basically write off all kinds of misguided behavior. :)