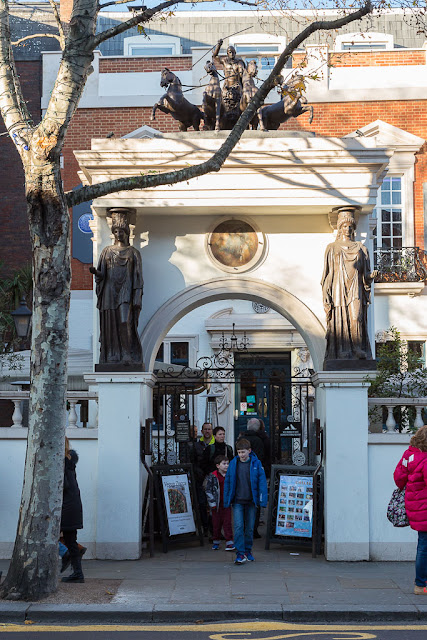 This may look like a stately official building, or maybe a museum, but it's not. It's a Pizza Express restaurant.

It wasn't always a Pizza Express, though. It's the gateway to the courtyard of a building called The Pheasantry in Chelsea. Dating from the mid-19th century (on the site of some earlier structures that have since been demolished), the building housed an upholstery, carpeting and design firm, and later became a ballet academy run by a great-niece of Leo Tolstoy. (There's a blue plaque on the wall to that effect.) Famous denizens of the ballet world studied there, such as Dame Margot Fonteyn.

It then became "a bohemian restaurant and drinking club," according to Wikipedia, frequented by the likes of Dylan Thomas (is there a bar he didn't patronize?), Francis Bacon, Anthony Hopkins and Humphrey Bogart. Eric Clapton and Germaine Greer lived upstairs in the '60s. 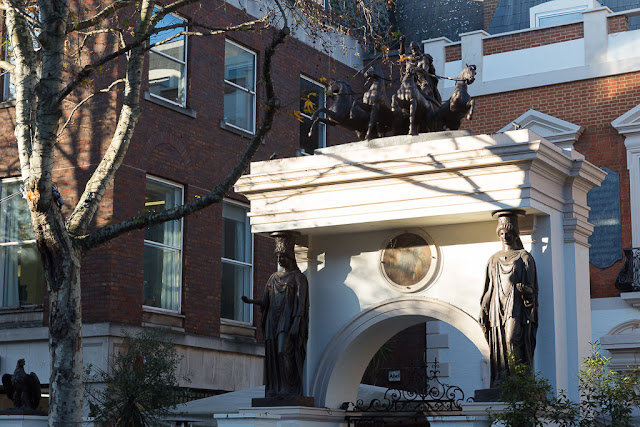 It was also a music venue, and remains one today.

It's an impressive entranceway, don't you think? If you want more detail about the history of the building, here's an interesting blog post full of old photos, including some showing the place looking pretty decrepit around 1970. I'm glad it has bounced back, and I'm tempted to go there for pizza sometime just to check it out.

Pizza might have been a good option last night. Dave and I decided to order out for dinner -- he'd been at the hospital in the afternoon getting one of his regular infusions to treat his Crohn's disease, and he understandably didn't want to cook. (I volunteered, but he didn't want me to cook either. I wonder why?)

We ended up ordering sushi, and I tried something new -- two pieces of shrimp nagiri that, to me, tasted faintly dubious. I suspected I'd be up all night, but as it turned out, everything was fine. I slept like a log, and so did my stomach.
Posted by Steve Reed at 6:25 AM

In the flat at The Pheasantry....

BACON Christ Eric! Give that bloody guitar a rest will ya? I'm trying to paint.
CLAPTON Okay but make me a bacon sandwich will ya Bacon?
BOGART (Entering kitchen) I feel like I'm dead.
HOPKINS (in Welsh accent) That sounds like a line from The Silence of the Lambs.
GREER Yuck! That film was horribly chauvinistic Tony. The way you looked at Jodie Foster - it sent shivers down my spine.
BOGART (at fridge) Okay own up! Who took my milk again?
CLAPTON Not me!

Too bad I was an oblivious teen when I lived briefly in Chelsea. To think that I was in the same neighborhood as Clapton, who has been one of my favorite artists for years and years,

At least the building is intact--unlike some of the ghastly London facades that now front bizarre modern buildings. I might check the place out when I am in London next week. Not that far from John Sandoe's bookshop--and I am definitely going there.

That is a most interesting history for a pizza restaurant. You should definitely go there!
We ate sushi at a Chinese buffet yesterday which seemed sketchy but it was fine.

That is quite a history for a pizza restaurant. If those walls could talk...

quite a varied history for that building and a pretty fancy facade for all of them except the ballet studio. the sushi I had in austin with my granddaughter was good except for one choice. not bad and not sketchy, just not great. if I ever go there again I'll probably pick something else.

Those Pizza Express places are everywhere these days but, this one has to be the most grand looking I've ever seen. And, what a history for this building. It's wonderful that it is still going strong.

Well built buildings can go through many uses over a long period of time. Our wooden buildings are cheap and don't last very long.

Wow, I wonder how a pizza place ended up in such a storied location. It does look grand.

I wish I were back in London, trailing you.

We have polar opposites views of suspect food! I'd be spitting out that shrimp and scrubbing my mouth out with a scouring pad - lol

Glad it turned out fine :)

the link to the old photos is well entertaining! Must have been exhausting to be so fabulous. Just getting dressed would have sent me right back to bed. Cool building- pizza express. hahaha, so it goes.

YP: Brilliant! You really do need to write a play.

Marty: I think you should still claim Clapton as a former neighbor! Why not?

Mary: Yeah, it's a cool-looking building. Historic London calls it "a curiosity."

Ms Moon: I'll check it out and report back!

Robin: The stories they could tell!

Ellen: Yeah, somehow it seems suited for a ballet studio, doesn't it? But apparently it was the upholsterer who installed all that ornamentation.

Sharon: It's definitely the fanciest Pizza Express I know!

Red: Yeah, no one builds that solidly anymore.

37P: It was probably a down-and-out building and someone saw the potential.

Jenny-O: Well, I know it's silly, but I didn't want to waste it! LOL

Linda Sue: Yeah, it's amazing how much time people must have taken just to get ready for the day (or evening). But then, they didn't have TV and Internet. LOL

Wow, I loved the history of this building and all its famous characters. BTW, I'd have opted for the pizza. You have a super day, hugs, Edna B.

Oh I totally love that building. It is gorgeous and I just adored all that had at one point lived there. Eric Clapton... Oh Yessss and yesss I would love to be able to see all of these places and I am going to definitely go and read the history. Thanks for the link.

Poor Dave. I am so sorry that he is fighting that horrid disease. My brother in law has Crones Disease. He hurts so often but sometimes I have to put the blame on him because he knows he isn't supposed to eat anything with seeds like Poppy seed buns, strawberries, melon etc...
Good to know that you and your stomach slept like a log :)