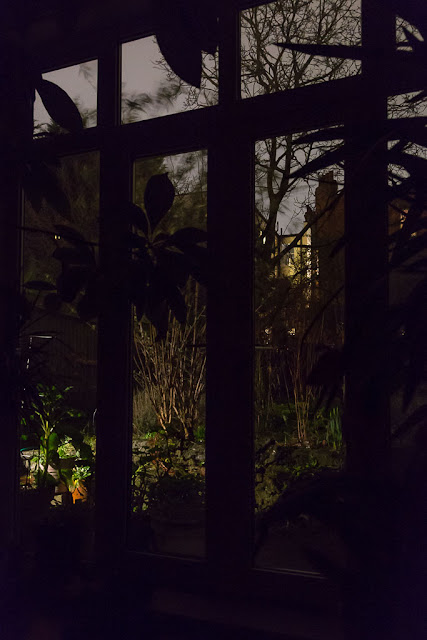 It's so dark at this time of year that a lot of my pictures get taken at night. (On weekdays, I am outdoors in daylight only on my walk to work -- which takes about 25 minutes.) I took the shot above a few nights ago, when Mrs. Kravitz left her patio spotlight on. I like the effect the light produces in our own garden. Fortunately it's on a side of the house where it can't reach our bedroom, so it doesn't disturb us. 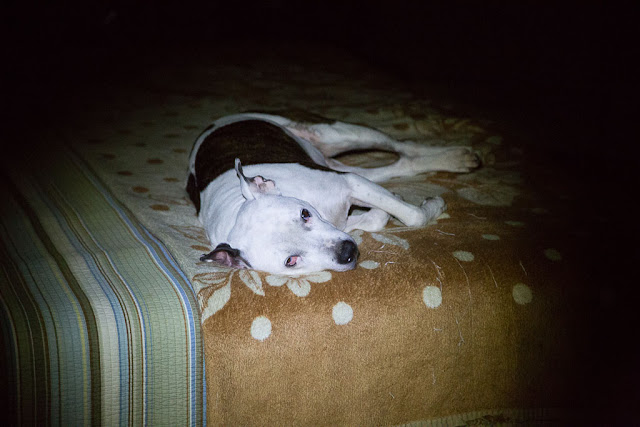 And then I walked into the dark bedroom and took a picture of sleeping Olga, using a flashlight. She said, "What the HELL?!" (She said it with her eyes.) 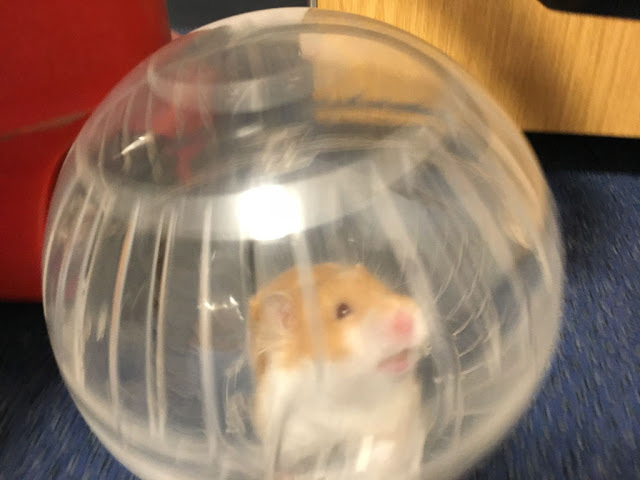 This was our visitor yesterday at work. A student brought this hamster into the library so it could "get some exercise" while she worked on a project. It rolled around in this plastic ball, bonking into things. Apparently its name is Peppa. I have no idea whether it lives in the school somewhere or if she brought it from home.

When we were kids, my brother and I had gerbils -- Tivoli and Eisenhower -- and they had a plastic ball just like this one. Apparently rodent exercise technology hasn't advanced much in the last 40 years.

I wish I could say that my gerbil was named after Tivoli, Italy, home of the Villa d'Este, a UNESCO World Heritage site. But no. My gerbil was actually named for a brand of beer produced in Denver. (I collected beer cans at the time.)

Anyway, aside from night photography and visits from spontaneous rodents (fortunately just the one), not much is going on around here. Work stuff, but nothing very interesting, unless you want to know how I'm redesigning our overdue book reports. Which you don't, and I don't blame you.
Posted by Steve Reed at 7:04 AM

It is very cool that the school allows small pets and the names you chose for yours were cute.

We had 2 " female" gerbils when the boys were young.......one day, just as we were about to go to Brittany for 2 weeks, the eldest ( about 11 then...now 41 !) said, " Mum this gerbil looks really fat" . An hour later he said " MUM.....there are babies coming!!) So, 6 little gerbils extra when we got home. Couldn't manage to find a pet shop to have them all, so were left with 4 of the little ones. Had to find another aquarium and separate them into male and female for the rest of their lives ! One of them lived for over 4 yrs.

What I would like to know about is the process of lending out your legendary computer chargers, funny tales about aforesaid computer chargers and photos of them both on your desk and in use. Of course the faces of pupils (American: students) would need to be blurred to avoid legal action.

I would be willing to wager you had the only gerbil ever in the world to have the name "Tivoli."
Just a guess.
Funny how even a little animal in a place where animals don't usually belong can be so amusing.
Does the constant darkness make you depressed? I think it would me. I think it does Olga too.

I heard a news report this morning about some mice that have spent the last month on the Space Station. They just arrived back on earth. The Scientists are studying effects on muscles. Ever since I heard the report, I've been trying to figure out how mice could cope with zero gravity. Did they have exercise balls like this in space? How did they eat. So many questions and your photo of that little rodent brought them all back.
I love the photo of Olga. She certainly looks as though she is not amused by the flash of light while she's sleeping.

I had a series of hamsters all named Tiny. they didn't have those fun little balls back then I don't think. days have gotten noticeably longer here.

I love that photo of your garden in the dark. The lighting is just right. And Olga is giving you the kind of look that Pogo gives me when he sees me with a camera. Just before he hides his face. hahaha. When my children were growing up, we had a house full of critters. You have a wonderful day, hugs, Edna B.

You meant, of course, that there is only one rodent that you're aware of!

rodent in a ball, my son's friend had one, some guy came in and just thought it was a normal ball and drop kicked it , bounced off the wall, hamster didn't make it and the children were in shock , distressed, horrified...things are not as they appear sometimes!
Olga speaks with her eyes, like a teen ager..."Gawd, my dad is so rude!"

I can't remember what I was going to say!

E: This is the first time I've seen a small pet like this at the school. I had no idea they were permitted!

Frances: Well, good for you for separating them and letting them live out their lives.

YP: Believe me, you do NOT want that.

Ms Moon: I told Dave last night I think I have seasonal affective disorder! It's never bothered me before but this year seems so dismal -- not only dark but incessantly rainy.

Sharon: Poor mice! I'm guessing they didn't have a say in the matter.

Ellen: Ha! I love that they all had the same name.

Edna: Olga used to love the camera, but she always seems very impatient with it now.

Linda Sue: OK, it would take a STUPID person to think those balls are for kicking. They're hard plastic!