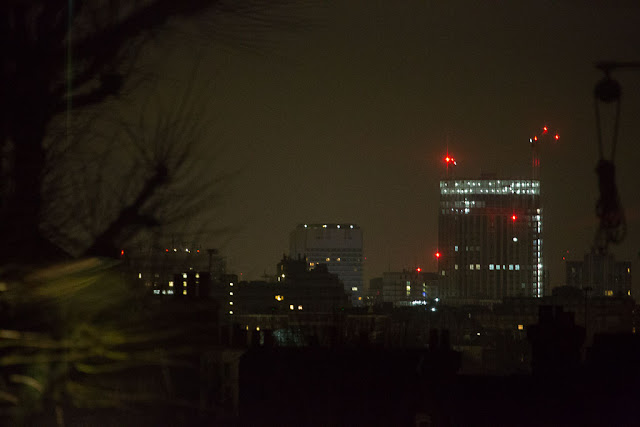 On Sunday I got up around 3 a.m., overheated and thirsty, as I sometimes feel at that hour. I got some water in the kitchen and took it into the dining room, where I looked out the window and down the street as I drank. Our ground-floor flat is located on a hill, and this was the view in the distance, looking south.

I've often idly wondered what buildings those are. I had a vague idea they might be in the direction of King's Cross, but I wasn't sure. I decided to figure it out. So I took a few pictures and, the next morning, began plotting trajectories on Google Maps. 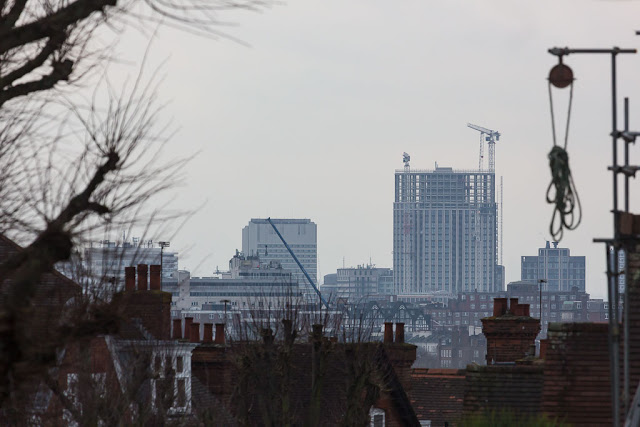 Here's the same view in the daytime. Estimating the direction with a ruler and using Google Street View, I finally recognized one of the buildings -- the second-tallest one in the photo, at center left. It's the Hilton London Metropole hotel, located near Paddington Station. Using that as a guide, I realized the big new building with the crane is part of the West End Gate development, just up the street from the Hilton on Edgware Road.

So basically, this is where I'm looking, with our flat the top point: 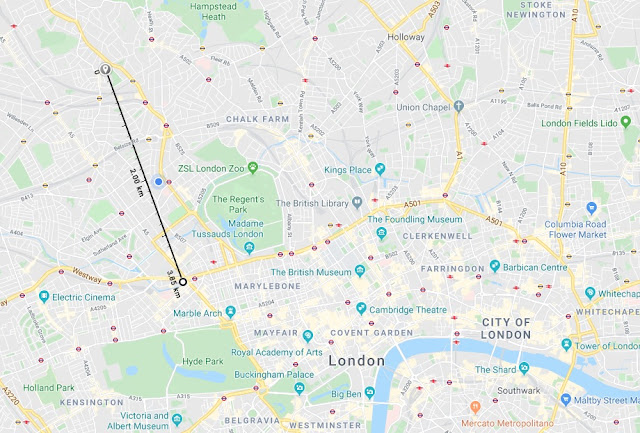 Instead, my sightline goes over St. John's Wood, very close to where I work -- and basically right over the roof of Abbey Road Studios, a place of pilgrimage for every serious Beatles fan. The studios are too low to be seen from our dining room, but the tudor-looking building in the photo is located on Hill Street, just off Abbey Road and right next to the studios. 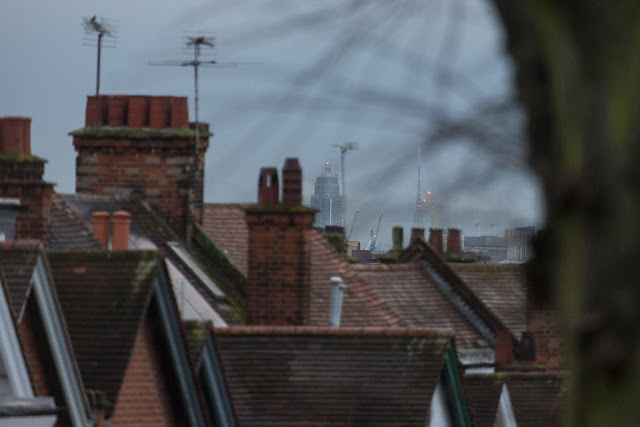 Turning my head slightly to the left while looking out the window -- so on a slightly different sightline -- I can see the top of the round tower at St. George Wharf in Vauxhall, which is much farther away. (I took this photo yesterday evening, which is why the light is so different.) 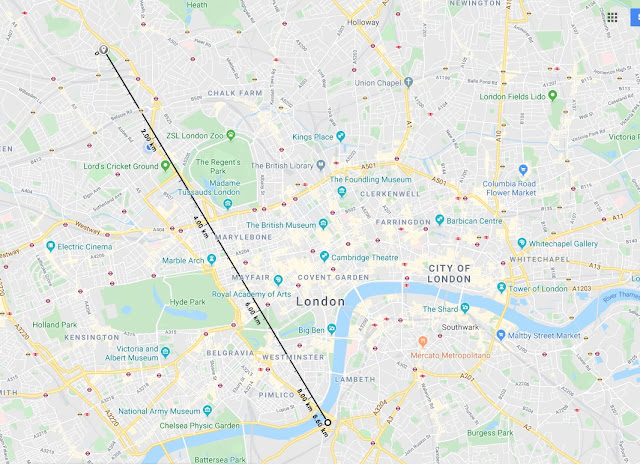 It's right on the Thames, about 8.6 km or 5.34 miles away. (It's also a controversial residential building, with units owned almost entirely by rich absentee investors.)

Finally, while looking at the photo above, I realized I could see not only the Vauxhall tower, but beyond it, the Eiffel-tower like structure of the Crystal Palace Transmitting Station. It's a huge broadcasting antenna on a high point in South London, 16.2 km or just over 10 miles away. 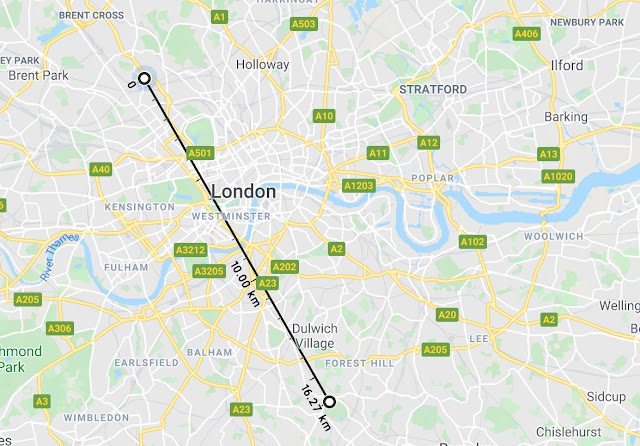 It's so cool to finally understand what I'm seeing when I look out the window and down the hill!
Posted by Steve Reed at 6:57 AM

Being a geography nut and a map addict I found this blogpost fascinating. Now you know where you are you just have to work out who you are.

What a beautiful place you live in. Can you imagine if, when you were a little boy in Florida, someone had told you that you'd be living in London one day with those buildings as your neighbors?

If you angled your line a little more to the right (from your place) over towards Kensington, you would have had my usual hotel in your sightline--just down the block from V&A and one more block on to the Gloucester Road tube station. Just left there this past Wednesday. However, it is only a low bldg of suites, so perhaps not.

Very cool! And I'm just now reading A Gentleman in Moscow which is set entirely in the Metropol hotel in Moscow :)

I love those Victorian chimney pots and the jagged rooflines. A 10-mile view is extraordinary in a city like London. You're such a smart researcher; must have been all that trading at the NYTimes.

That's pretty amazing that you can see all that way. Great job tracking it down. You've made me wonder what I was seeing when I looked out my hotel room window last time I was there. I'll have to take a look at those photos and see if I can figure it out.

What a great view out your window there. It's so interesting to see and be able to identify all that is out there.

You take a good look at your view. I'm sure many others would ignore it. So you learned something.

so cool. all I can see is flat land and agricultural fields.

I find it all quite interesting. That first photo is really nice. Amazing how different things look in the nighttime colors. You have a wonderful day, hugs, Edna B.

Yes, the nighttime shot is great!

London ist just fab. I loved living there. Lucky you!

I get your excitement over this! I find Google maps and streetview to be so helpful in orienting myself. It's like being a bird. Very cool :)

Working sightlines out is fascinating...we can see much further than we think

Now isn't there a song about London with the refrain "if it wasn't for the houses in between".....

WOW what good eye sight! That is amazing! Loved the links to other information, too! You do not even need a telescope to see almost all of London from your perch, that is just awesome!!