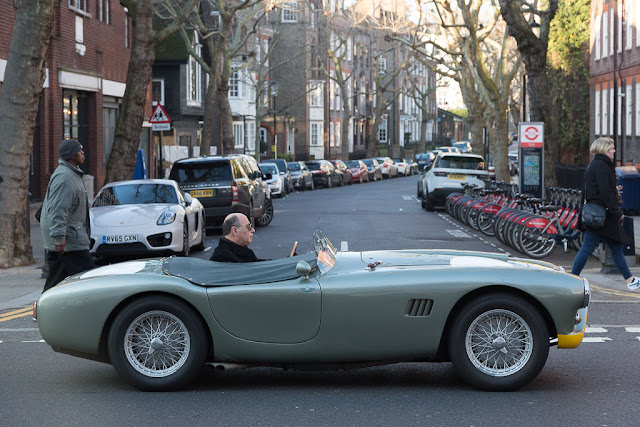 Why is it that the first week back from a vacation always seems so long? A teacher said to me yesterday, "It's Friday -- finally!" As if we'd been working for weeks and weeks with no break, when in fact we just had almost three weeks off. But I agree -- it did seem like a very long week.

Olga's new collar arrived yesterday. I'll get a picture today when we're out walking. Her old one was actually coming apart -- but we've had it ever since we got her in 2013, so it's served us well. The replacement is the same make but a slightly different color. 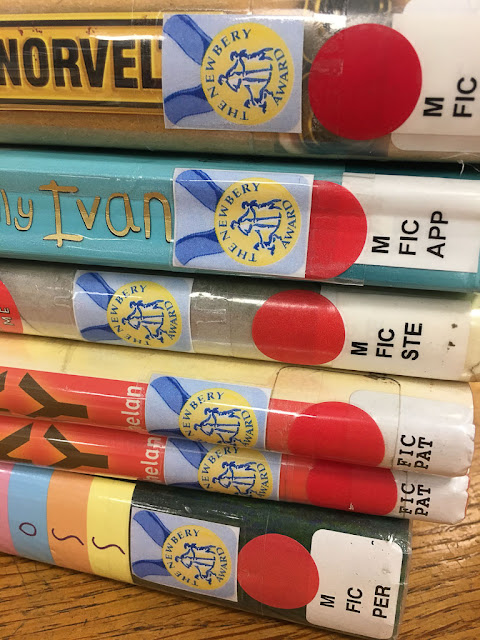 This is how I spent much of my workday yesterday.

The Newbery Medal, as you may know, is given every year by the American Library Association for excellence in children's literature. Our library has almost every award winner, going all the way back to 1922. As far as I know, we're missing only one -- a biography of Daniel Boone from 1940 that's long out of print.

When I weed the shelves, I'm always afraid that I'm going to inadvertently discard a Newbery winner. Some of them are pretty obscure -- "Strawberry Girl" from 1946, or "Dobry" from 1935, for example -- and unless they have that big ol' Newbery medal reproduced on the cover it's hard to know what's won. So yesterday I put little spine labels on all the winning books.

This turned out to be a far bigger task than I thought, but by the end of the day I'd labeled almost everything.

(The red dots, by the way, are our system for designating fiction books that are suitable for fifth or sixth graders. Books for teens don't have the red dots.)

My project led to a conversation with one of my librarian co-workers who isn't a fan of the Newbery. She says it's awarded by adults who have no idea what kids want to read. That may be true, I told her, but when I was a kid, I relied on the Newbery to help me choose books and I never felt led astray.

In a burst of temporary insanity, she and I cooked up a plan in which I will read ALL of the Newbery winners. We'll put them on a special cart or display and I'll post one-paragraph reviews about each one.  I'll want to read adult books too, so this will take a while -- I figure I'll be done right about the time the Newbery celebrates its 100th anniversary.

I'm sure some of them are going to be incredibly tedious -- especially the older ones. ("The Story of Mankind" by Hendrik Willem van Loon, anyone?) But I'm ON it! This appeals to the part of my personality that loves to complete a difficult challenge. I've even ordered a used copy of that missing Daniel Boone biography from Amazon.

(Top photo: A stylish car in Chelsea. I have no idea what kind it is. Anyone know?)
Posted by Steve Reed at 7:12 AM

Olga is a deprived girl when it comes to collars..... Alexi has got 6 or 7 ! I like to ring the changes colourwise. He is in purple today!! Have a good weekend.....in spite of the weather. ...which is drizzle here at the moment.

Many writers choose pen names as you know. Changing your name to Somtochukwu Reginald when you publish "The Adventures of Olga" will enhance your chances of winning The Newberry Medal.

I love it when you recommend books. I remember 'The Dry' and really enjoyed this going on to read another by the same author.
Looking forward to seeing that lovely doggies with his new collar.
Briony
x

I LOVED reading Newberry winners and nominees when I was growing up. So many of them are still favorites, too. I'd love to see your collection.

I loved Bud, Not Buddy. Pretty sure it was a Newberry winner. I tried to get my kids to read it but they never did so there you go.

I often found the Newberry Award winners to be my least favorite as a child. I can distinctly remember thinking that. But yes, you DO love a good challenge and this is definitely one you're up to!
No idea about the car but I want one.

You obviously love reading. Good on you. I love to read too but sadly my phone has taken over so I'm trying to figure out a way to avoid it. Keep it in my locker at work on breaks comes to mind. Computers, phones, the internet, all time suckers and I have a hard time reading at night because I'm just so damned tired.

Perhaps that could be a new year's resolution for me, less screen time.

I've never even heard of the Newberry Award. How is that possible? I do love how you and your co-worker plan to read them all. I'm looking forward to your reviews.

Nice challenge to read all the Newberry winners.

That's quite a challenge you've taken on. It will be interesting to her your reactions to the different books, especially the older ones. I wonder how they will stand the test of time. I love that sporty little car.

Oooh, fun! I looked up the list and was surprised how many I'd read and loved in childhood without knowing they were Newberry books (that is, I read many into the 1970s--have read only a couple of the winners since then).
Some favorites: Island of the Blue Dolphins, A Wrinkle in Time, King of the Wind (I was horse crazy), Rabbit Hill, Dr Doolittle.

I'd never heard of The Story of Mankind so just now looked it up and it sounds like it might be fun--will be interested to hear your review. This one said,
"Despite its ponderous title, The Story Of Mankind is a lively book, laced with dry humor and wry observations."

I LOVE the first photo of the car and driver. It looks like a Renaissance portrait of a deMedici c. 2020. It's good to see your street photos again.

I asked my husband what that car was but he didn't know. There's a logo on the passenger door but it loses clarity when I zoom in on it. It's not Bentley, that much I know.

I apologise most sincerely for my careless mis-spelling of "Newbery". How will I sleep tonight?

you Do know how to take on a challenge! I would speed read through most of them...scan, glimpse, glance. YES that car/man/street photo is fabulous. So Olga is a bit older than seven now? Time is getting away!

I bought every Leon and Diane Dillon book because they were my favorite illustrators. I tried to read read as many books from the Newbery and Caldecott lists as possible. I still read children's books.; many illustrators do, which allows me a reasonable excuse to buy books for young people.

That car looks like an Austin Healey to me but I'm really no expert.

That's quite a spiffy car. I don't know what it is, but it does look very expensive. My little guy doesn't wear a collar. He has a couple harnesses. And he has two drawers full of shirts, sweaters, coats, etc. He's not spoiled!! Plus he has a car seat, a basket on my walker and a stroller. Yup, he's got my number! That's quite the challenge you've picked for yourself. Good luck with it. You have a super day, hugs, Edna B.

I don’t think I even knew about the Newbery awards when I was a kid. I would totally have wanted to read the books. Can’t wait to hear what you have to say about them!

Wow - that's a challenge all right! Just out of curiosity, when you say you and your co-worker cooked up this plan, does she have to do an equal amount of the work? lol

I just had a look at the winners and honor winners through the years and was surprised at how few I've read myself.

Frances: Yeah, Olga has only one collar that we regularly use. We're minimalists in that regard!

YP: Now THAT is an excellent pen-name. I won't penalize you for misspelling Newbery since you successfully spelled Somtochukwu. At least, I think you did.

Briony: I'll try to recommend some more adult books too! The Newbery winners are all kids' books.

Jennifer: I'll take a picture when we get them all on a cart together.

37P: Yes, "Bud, Not Buddy" was indeed a Newbery book! Why are kids so resistant to our reading recommendations? Even kids who come to me and ask for a recommendation often don't like what I suggest.

Ms Moon: That's interesting. I suppose it depends which ones you read. Plus, I can see you having a little rebellious streak! You're an independent thinker. :)

Lilycedar: I do love reading, but I also struggle with managing my computer time. It's the curse of the modern era! I think what saves me is that I don't use my phone for much more than taking pictures and talking to people. I only get online with it when I'm out somewhere and need something. I never just browse. You know?

Robin: My school librarians made a big deal about the Newbery when I was a kid. That's how I first heard of it.

Red: It will keep me busy!

Sharon: I have a feeling some of the older ones will be pretty stale. Stay tuned!

Fresca: Oh, good! The ponderous title put me off -- I'm glad to hear there's some wit to it! I also loved the first three books you mentioned -- they're some of my absolute favorites from childhood.

Vivian: The logo on the side of the car says "Goodwood Revival Meetings," which are apparently retro-themed car-racing rallies.

Linda Sue: Yeah, I expect some of them will be pretty fast reads. Thank goodness!

BobbieJean: The artistry involved in many kids' books is amazing. I'm not tackling the Caldecott winners, though -- they're mostly in our Lower School library, which is in an entirely different section of the school. Do you know Leo Lionni? He's probably my favorite children's book illustrator.

Edna: Olga used to have a harness but she wore it out, and fortunately by that time she'd aged enough that she didn't really need full-body containment anymore. :)

I have had several friends that have been on the Newbery committee and I can tell you that, as working Children's Librarians, they do know what kids read. For some of the older ones kids may not read them today but they were read at the time the won.

Ha! I read both Strawberry Girl and Dobry. I was born in 1941 and the library didn't have a huge selection, and the Newberys were mind-stretching if not always the most fun. I know a lot more about the world than I would have without them--I did notice that at the time anyway they tended to be about exotic countries or cultures.