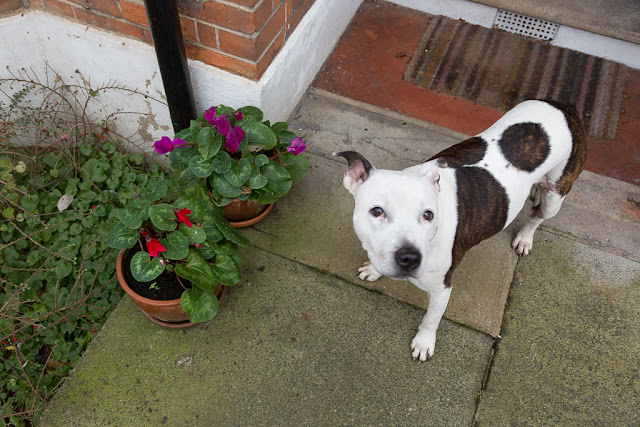 I was trying to take a picture of the cyclamens on our front porch, but Olga insisted on being in it! (And on not standing still.)

Yesterday was my first day back at work after our holiday break. It's nice to have the old schedule and routines back. There's comfort in it. I spent most of the day organizing a mountain of returned books, reshelving, restocking the magazine racks, that kind of thing. And helping a bunch of kids find new books, of course. 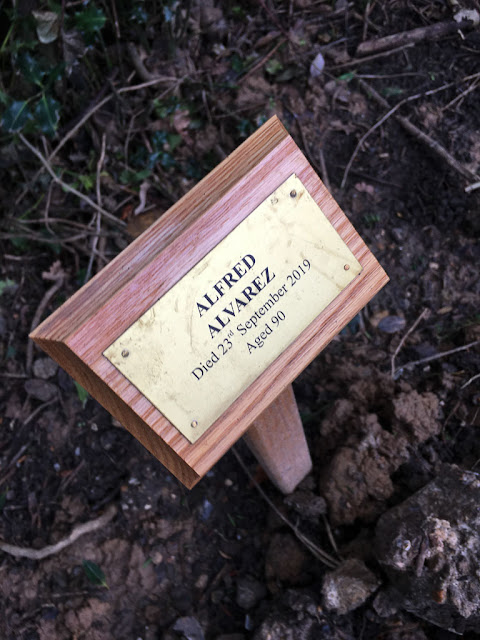 Speaking of books, when Olga and I were in the cemetery on Sunday we passed this relatively new grave marker. I suddenly realized who this is -- it's A. Alvarez, a poet and critic who helped advance the careers of many well-known writers in the mid-'60s. (Sylvia Plath, Ted Hughes, Anne Sexton and Robert Lowell among them.) I used to read a lot of poetry, particularly when I was in college, and his name often appeared alongside theirs as editor or anthologist. I read his obituary in The New York Times several months ago, and now, lo and behold, he's buried where I walk my dog!

And speaking of name-dropping, I'm really enjoying Tina Brown's "Vanity Fair Diaries." I subscribed to Vanity Fair in the '90s, and although by then she was gone and Graydon Carter was editor, she'd helped define the magazine and give it the flavor it retains today. I always loved its mix of glitz and serious news -- although eventually all the celebrity stuff sort of put me off.

Anyway, just to give you a taste of what her book is like, here's a paragraph describing an April 1984 dinner party for her and her husband Harry hosted by Washington Post publisher Katharine Graham, and attended by Post editor Ben Bradlee and his wife Sally Quinn, among others:


It was lovely afterward with the Bradlees just hanging out. "I drew Justice O'Connor as a dinner partner," Ben said. "That was a bucket of mirth." Harry had drawn Pamela Harriman, and Sally was all over him to penetrate the sexual mystique. "She hung on my every word," was all my clearly hopelessly captivated husband could come up with. Sally described the Republican senator she had sat with as "a flaming cavorting asshole." I kept laughing about that when we went up to our room. "Cavorting" is such a deliciously underused word.

I would love to know the identity of the Republican senator. The pool of possibilities seems large.
Posted by Steve Reed at 6:58 AM

I was thinking in my head "Who was the Republican Senator???" There are a lot of possibilities but my brain doesn't remember 1984 other than it was the year my daughter was born. I also think that 1984 was a very tiring year for me. I doubt I was reading Vanity Fair at the time.

Isn't it strange that you and Olga walked by the grave and didn't realize at the time just who it was? So will you visit his grave on a future visit?

I love seeing pictures of Olga. She is really a very pretty happy female! I just love the way she seems to be smiling!

I am headed to bed but first I wanted to stop in and see if you had posted. I am not sure of the time difference but now I know I should stop in in the wee hours of morning here. It is 3:49am here.

I have to agree that it is comforting to get back into our routines. I have a few days left before school starts back and then maybe we can all get back to our normal everyday routines.
Have a great day... Big Hugs to you and Olga.

Not a pool - more of a cesspit! As for Al Alvarez's grave, maybe you should put one of your cyclamen pots there. I remember reading his book about suicide - "The Savage God" when I was at university in the mid-seventies. Fascinating and revelatory.

Signed any chargers out yet?

If you are enjoying Tina Brown's book you might also like the recently published Nicholas Coleridge The Glossy Years. Lots of name dropping

Considering that in 1984 the senate included such Republican members as Strom Thurmond, Dick Cheney, Jesse Helms, and John Tower among them, I would say she doesn't really have to name anyone in particular to apply that appellation.

Yes. I have to get that book. I had a subscription to Vanity Fair forever but have finally let it lapse.
Same with Esquire. I do not like the new editor there.
Still getting the New Yorker.
Olga probably sees the camera now and thinks that she must be the subject. Strike a pose!

Olga! What a doll.

Cavorting really is a great and underused word.

I haven't quite got back in my normal routine and in fact am trying to change it up a bit.

do you suppose that's his permanent marker? being wood and all I wouldn't think it would last long.

I knew A. Alvarez as the author of The Biggest Game In Town, about Texas Hold 'Em and the World Series of Poker. When I later came to understand that THAT A. Alvarez was the same A. Alvarez that was so very literary, iI could not process it. I thought, No, it has to be the son who plays poker and his father must have the same name. I still can't hold the two parts of A. Alvarez together in y head.

I bet I would enjoy that book too! That was quite a heady crowd at the dinner party. Pamela Harriman had a well known reputation when it came to seducing wealthy men. You are right about the possibilities for the Republican. There is quite a list of candidates that fit the bill.

Love that description of the dinner party. Which Republican senator? All of 'em.

What a wonderful photo of Olga. I have not read that book, it's not my cup of tea, but I do love that word cavorting. It's definitely underused. You have a wonderful day, hugs, Edna B.

I once met Sally Quinn and complimented her on her article about Jan Morris. She was delighted and told me the subject hated it and called her a bitch afterwards.

Large?? How about endless...nice of Olga to grace your photo.

Cyclamens? Blooming? In January? Is that normal?? I can't even grow cyclamens indoors let alone outside in January :)

I love that Olga wants to be in your photos :D

What a great photo of sweet Olga. Cemetery tip: Find a Grave Memorials. Covers the earth, nearly every cemetery covered. So yo can, for instance, google captain spencer johnson, and you will see my grandpa and also details of the burial plot, his wife, children, etc. Works for celebrities as well as common folk. Free.

Beth: We can't really help but visit it -- it's located on one of the main pathways through the cemetery. So yeah, we'll be seeing it again!

YP: The high schoolers have been busy with some special activities, so charger-borrowing hasn't ramped up yet. I suspect today we'll be getting back to normal on that front!

Jennede: I bought that book too! I went to see Nicholas Coleridge speak several months ago. I blogged about it at the time.

Mary: Exactly! So many options! I can't believe Katharine Graham would invite Jesse Helms, though -- that's just a step too far. LOL

Ms Moon: The New Yorker is my only mag subscription at this point, although I read (or at least skim) lots of mags in the library.

Padre: She steals the show! It's all those treats you keep giving her. :)

Colette: Isn't it? Maybe we should all try to cavort with some expanded vocabulary in our blog posts.

Ellen: I don't think so. I think it's just temporary. His grave is still very fresh.

Vivian: I know! I have the same dissonance in my mind. Poker and poetry are an unusual combination! As for the photo, 1972 was kind of a hokey year overall.

Sharon: It really is an entertaining read! That paragraph made me laugh out loud.

Robin: Exactly! And back then, Republicans were milder than they are now.

Catalyst: The subject of a profile should never love the finished article -- if they do, it wasn't thorough enough.

E: Well, I suppose it has an end, but admittedly, it's a distant shore.

Jenny-O: Here they are winter flowers. I think I bought these last winter, in fact. I suppose if it snows they might need some protection, but they're fine in cold weather. We don't get nearly as cold as you do.

Penelope: Yes! That IS a great site. I've seen it before. I wonder if A. Alvarez is even on there yet? His burial was so recent!

That is a humble marker for a influential man. And Tina Brown's book sounds like a hoot!