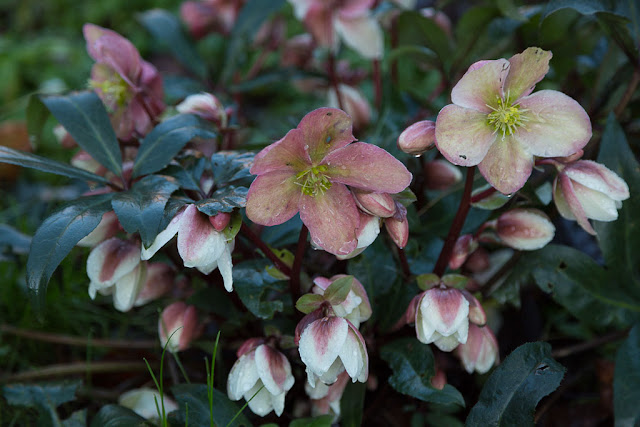 Even though it's winter, there are a few things blooming in the garden. The hellebore, above, is once again going gangbusters. We also have a little clump of snowdrops and I saw a budding crocus yesterday morning.

I also found a sad-looking ficus tree sitting on the curb across the street. The poor thing only has about six leaves left. I tried to leave it there but I just felt so bad for it. Now it's next to the back window in our living room. We'll see if it revives.

When I wrote about my goal to read all the books that had won Newbery medals, I think I mentioned that our library was missing only one -- "Daniel Boone," by James Daugherty, which won in 1940 and is apparently no longer in print. Well, a few weeks ago I found a copy online, and bought it for about £30 with the intention of giving it to the library. 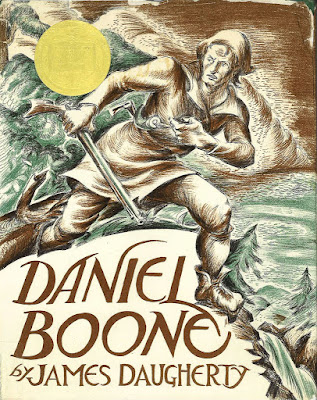 It arrived on Monday, in a bedraggled plastic covering -- a book formerly housed in an elementary school library in Connecticut. It even still has the old pocket for a checkout card in the back, and a sheet of date stamps ranging from 1963 to 2000. But even though it's already spent at least 40 years in a library, it's basically in good shape. We took the old plastic cover off and put a new one on, preserving the paper dust jacket underneath, and voila -- it looks great! God only knows what it's going to say inside. I wonder if it contains a lot of politically incorrect language about Native Americans. I'll let you know when I get around to reading it.

It's funny how Daniel Boone and Davy Crockett (who I always get confused) and other such heroes of westward expansion used to be such prominent figures in American pop culture, and now I never hear about them. I suppose the whole subject of manifest destiny is seen in a new light these days -- and rightfully so -- whereas decades ago, Westerns were still big at the movies and every kid played Cowboys and Indians. Our cultural perspective changes over time, doesn't it?
Posted by Steve Reed at 6:17 AM

Congratulations on filling the blank in the Newbery collection. Will there be a plate inside the cover recognising the generosity of one Mr Stephen Reed, school benefactor?
You really tried to leave the forlorn ficus on the kerb. For how long? Ten seconds? It's like a plant sanatorium at your place...
Alphie

I tend to leave the garden to its own devices at this time of your, but I must go and see if my hellebore is flowering. It was looking rather sick at the end of last year!

Nobody plays cowboys and indians any more though I occasionally still go down to the pub in my ten gallon hat, wearing leather chaps and stirrups, chewing tobacco and waving my lasso in the air singing "Davy Crockett - king of the wild frontier!" I managed to capture two redskins at the Indian curry house.

I'm still trying to recover from the vision of YP in chaps (comment above)...

However, I do like to see a little bit flowering in your garden. When I was up in Glasgow and Edinburgh, I kept catching glimpses of barely flowering cherry trees in small gardens. So uplifting, even if I do worry about the rest of winter curbing their enthusiasm.

I hope that ficus survives in your care. You do have a green thumb. I love seeing the water drip off of the blooms in your photo today. It will be interesting to hear about that book. You are so right, we don't hear that much about Boone and Crockett these days. Growing up, I heard and read about them all the time.

Yes, the days of coonskin caps are well gone. And yet, like Mr. P. I can still remember the Davy Crockett theme song as well as the Daniel Boone one. ("Daniel Boone was a man. Yes a real man!")
Your hellebore is lovely.
Good luck to the newest member of your family- I am sure that with some love and attention that ficus will come back nicely.

I didn't know much about Daniel Boone so I read up about him on Wikipedia. He had an interesting life and was raised as a Quaker which I didn't know. He also had a lot of children. No wonder the women died so young.

I love hellebore but it can't survive here sadly.

I read one of your last posts about the sightlines from your place. I love doing stuff like that, or using google street views to look up stuff people are talking about. It's an amazing world we live in.

However, I still cringe when I hear English people call our native Americans "red Indians". And if you've seen the Korean movie "Parasite", you'll know that cowboys and Indians is still a popular children's party theme in Seoul. Weird, huh?

I love that you rescued that ficus. It's hard to look away from a living thing that needs some attention. I hope it thrives in your good, kind care.

It's going to be a toss up if our culture changes for the better with the Trump influence. He's given people the okay to be lunatics.

Your plant is beautiful. Your winter must be a lot warmer than ours. I love that you saved that ficus tree. I can't wait to see how it thrives with your care. You have a wonderful day, hugs, Edna B.

It's amazing what a new plastic cover can do for a book. I clad many books that way when we had our bookstore.

The culture of the US has moved on for some people. I equate manifest destiny with genocide. I'm not sure all of my fellow citizens would agree.

Steve I am so glad that you did not abandon the ficus tree. Give it (him or her) a good pep talk often. Play music too. I believe that it will thrive under your gentle care.

Every once in a while I get a chance to watch Daniel Boone and I smile thinking of all of the good reads and shows of my childhood. I loved Davey Crockett too.

I am going over to work on my blog. It is time. Big Hugs and have a wonderful week!

I wonder if hellebores would do well down here. I've been meaning to put them and lenten rose on my plant list for the next time I go to the nursery so now of course I'm looking around for the list and can't find it.

two of my azaleas have suddenly put on big buds but only just a few. this is ridiculously early as they usually bloom in March. 90% of the plant is already putting out new growth which means no flowers on those branch tips. I have no idea why they aren't going to bloom this year.

If you can find time, Allan Eckert's, The Frontiersmen is an incredibly readable historian and covers Boone, the facts are precise but the stories read like a novel. Can't recommend him enough. The Frontiersman would be the very last book I would give up. It is that good. My Johnson relatives helped him with the Cumberland Gap road construction into Kentucky and we are distantly related.
Crockett's story and the Alamo are a mishmash of fable and bs.
The real hero is Rebecca. No one's wife was a wonder to raise those children when Boone was seldom home.

So glad auto correct made my poor sentence structure even worse than what I wrote. I should have been more careful before send.

All our plants are asleep for the winter under lots of snow. It's a treat to see your pictures!

Alphie: Ha! I'll have you know I left that plant on the curb for at least 24 hours before I brought it inside. I really DID try to resist the impulse, as we have SO many plants!

Frances: Yeah, we're not doing anything out there right now either, although it's almost time to prune roses.

YP: I bet they were surprised! LOL

Mary: Yeah, we've got a few trees blooming here and there. I think certain varieties of ornamental trees bloom very early, but this seems WAY early.

Sharon: My dad used to watch "Gunsmoke" all the time!

Ms Moon: I remember those songs too! (I only saw the shows in reruns, I swear.)

Lilycedar: I had no idea he was a Quaker. Maybe this book will prove to be informative!

Vivian: Dave and I were just talking about watching that movie! Yes, the "red indian" term is cringe-worthy, and yet still in use.

Robin: I'll post a progress report at some point. :)

Red: Yeah, it's true. As much progress as we've made, we've done a lot of backsliding, too.

Edna: We've only barely had freezing temperatures here. We've had frost a couple of mornings but so far it's been a very mild winter.

Catalyst: It's true! They can really transform a book.

Allison: Well, that's true, there are some retrograde thinkers (or non-thinkers) out there, but I think most people acknowledge that white colonizers did wrong in the American West.

Beth: As I told Robin, I'll post an update on the poor old ficus.

Ellen: I think a hellebore and a Christmas (or Lenten) rose are the same thing, aren't they? The Christmas rose term is used here in England for hellebores.

Penelope: LOL -- I understand your comment but it IS a bit avant-garde, thanks to the auto-correct! I wonder if we have that "Frontiersman" book in the library? I'll have to look.

Jenny-O: No snow here! Not yet, anyway.