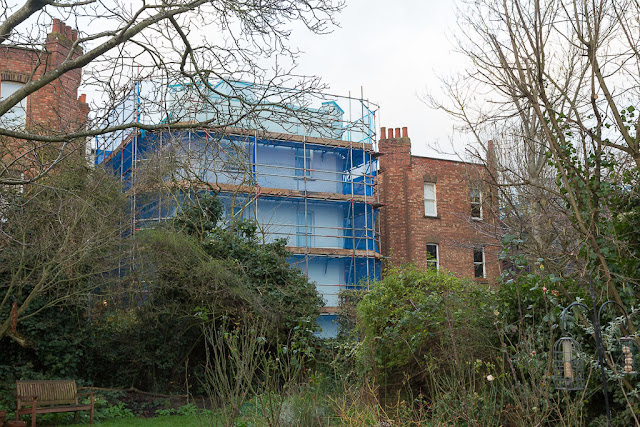 On Wednesday Dave went home in mid-afternoon, just after the school day ended. I got a text from him soon after: "That building behind the garden with all the scaffolding was painted today. It's blue!"

"Yup," he replied. It's always been white, which I like even though it can appear a bit stark, because it's completely neutral. But of course I couldn't see the building when I got home, because it was dark outside. Dave described it as light blue with dark blue trim.

I waited with trepidation for the sun to come up yesterday morning, and when it did, this is what I found. I don't know if you can tell from the picture, but the building isn't painted at all. It's just covered with temporary blue screening. I texted that fact to Dave, who was already at work.

"Ah, sorry, I was drunk," he said. (Which for the record is not true -- Dave gave up drinking ages ago because of his Crohn's.) I said, "You just didn't get out of your recliner to look more closely, did you?" Which he admitted had been the case.

I guess the world looks a lot different from a recliner. 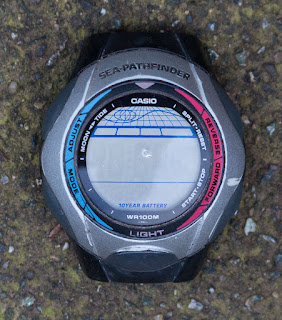 Speaking of the garden, I got a call from the landlord's managing agent yesterday saying the landlord wants to arrange a "site visit," in order to inspect some outdoor work she's considering on the front garden, the steps and the fencing.

We've never even met our landlord, so I'm intrigued by this opportunity. (Assuming the landlord herself is going to be there, which is what it sounds like.) I jumped at the chance to schedule something. They're supposed to get back to me with a day and time.

When I was in the garden a few nights ago setting up the fox cam, I found this old Casio watch in the dirt beneath the Japanese maple. It was attached to the remains of a watchband that crumbled away when touched. We've lived here almost six years, so I assume it's been out there at least that long. I wonder whose it was? Probably some kid's. (In which case it's been out there more like ten years, because we knew the family who lived here before us and they had no kids of watch-wearing age.)

I'm not really a watch person, but I'm tempted to see if this thing would work again, given a new battery. It's supposedly water-resistant. Maybe I could then return it to the landlord, who would be so impressed with my diligence and generosity that she would give us a break on the rent!
Posted by Steve Reed at 6:12 AM

I hope she's nice and that you'll get the chance to meet. Fingers and toes crosses for a break on your rent, too.

A lord is a man and a lady is a woman. Ergo if your landlord calls round he will be a man but if a woman appears she will be your landlady. I realise that this is a difficult concept to grasp. Good luck with the watch!

YP: I wonder if that's still true? Or is it like "actor" and "comedian," where the formerly masculine term has now become genderless? (People still say "actress" but there's a move against it, and no one says "comedienne" anymore.) I always say "landlord." It would never occur to me to say "landlady."

Next time you go in a pub and the woman in charge is behind the bar, try asking her if she's the landlord. You'll be sprawled on the pavement in a jiffy.

I think, after a quick google search that that is a Casio Sea-Pathfinder SPS-300 men's watch.
They must have made a million of them because they don't seem to be very valuable.
But wouldn't it be fun to put a new battery in it and see if it works?

I was in a bar one evening a few years ago, waiting to meet a friend to go to a book event. I waited for a little bit, and got antsy, and I noticed that the young girl sitting a few seat down the bar from me was wearing a watch so I leaned over and asked her "Could you tell me what time it is please?" And rather then checking her wrist, she picked up her phone and told me, 7:20. That's when I knew that wrist watches were going to be irrelevant for future generations.

Ah Steve, you are too kind. Charging that watch and returning it to the (probable) owner (possibly) two generations later. Of course, you deserve a reduction in rent. Wait, you should live rent free!

Seriously, I admire your dedication to all things lost and lonely.
Also: have you checked on ebay whether this watch is worth some actual money? Could be, you know.

Yes the blue would make for a very unattractive building. So it's only building paper. I wonder what comes next?

a break on the rent would be nice. probably not going to happen but it would be nice. A blue building , glad it was just screening. ICK, blue buildings of that size!! also it is impractical - blue hues on outside paint fade and require fresh coats every three years, I know this from a blue house I once painted. The guy at the paint store advised against blue hues.

well, I would like it if the building was blue. pretty amazing that the watched hasn't surfaced before now. and let's hope you like whatever changes the owner wants to make. there, see, I solved the landlord/lady thing.

Hahaha! Give you a break on the rent. Really? I don't think so.

That's a very funny story about the newly not-painted blue building. I think it would be cool to see if that watch still works.

You really are a bit of a dreamer, aren't you?
I love the story of the blue building and the recliner.

If you price watch batteries you may change your mind, unless you intend to actually get some use out of it! So many things come with little battery discs now, and they aren't cheap. A watch battery is about $8 here in Canada.

I wouldn't mind a blue building, but that's because I love blue - I associate it with the sky and ocean.

P. S. I meant to also mention that you can buy a new watch here for anywhere from $10 up, and that watch will work fine, only failing when . . . the battery gives out.

I like blue too. Of course it would depend on what it really looked like though - there's blue, then there's blue :)

hahaha, that was funny about the blue building. Something tells me not to expect the landlady to reward you with a break in the rent. What a nice find the watch is. A new battery and band, and you've got a new watch. You have a wonderful evening. Hugs, Edna B.