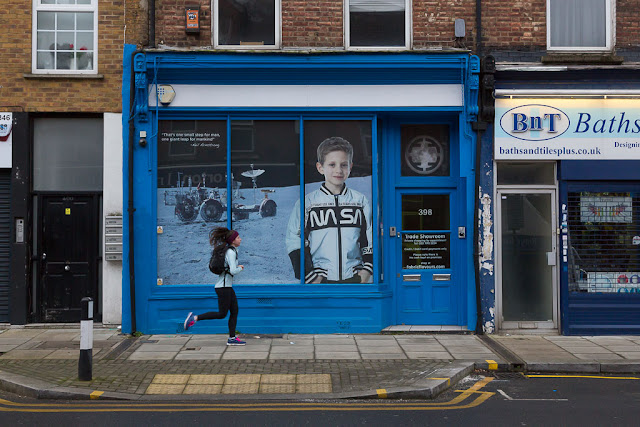 Olga and I walked northward through Childs Hill yesterday, and we passed this peculiar shopfront. "Who's that kid?" I thought. "And why NASA?"

Turns out it's a showroom for an online clothing company that sells kids' clothes under license from NASA (and also Disney, Marvel and others). Seems funny that they have a showroom in Childs Hill, of all places, but who am I to question? 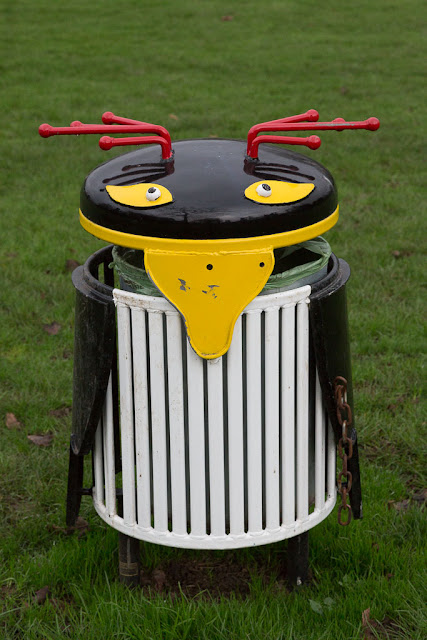 In Childs Hill Park we found a trash can that looks like a giant bird. There are also new benches and some landscaping changes. I guess it's been several months since we've been up that way, though it doesn't seem that long. 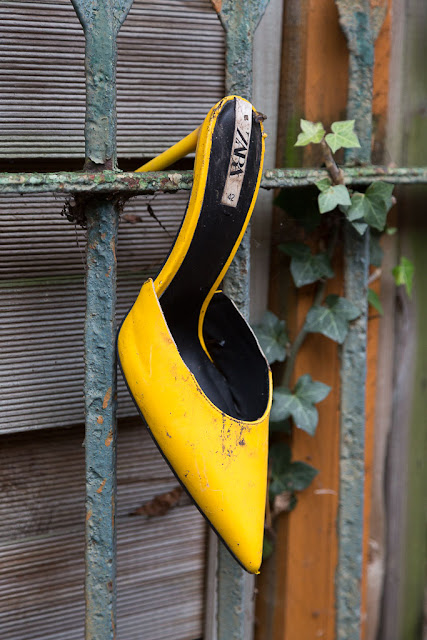 This seems like a wildly impractical shoe to wear stomping around in a park. Maybe that's why it was hanging on a fence. 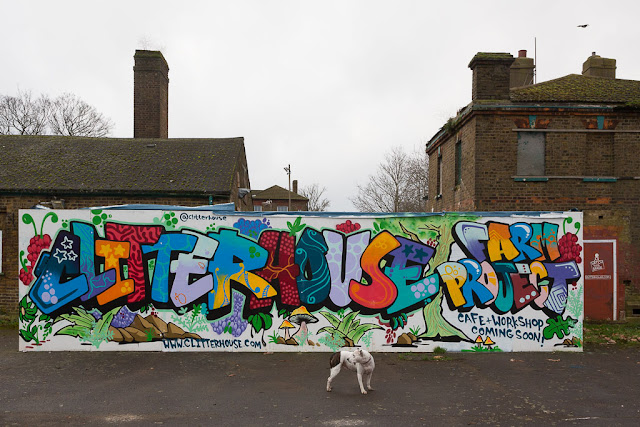 Then we walked over to the Clitterhouse Playing Fields, where there are ambitious plans to reopen the cafe and make other changes. Meanwhile, there's a groovy mural! Just out of the frame to the left are raised garden beds, where some kids were exploring. (I think that's what Olga's watching, but there could have been squirrels over there too.)

We had a quiet afternoon, which I spent mostly reading. We also watched Renee Zellweger's movie "Judy," in which she plays Judy Garland performing some of her final concerts in London in the late 1960s. It seems wrong to say I enjoyed it, because Garland was at the messy end of her tether at that point, but it was an effective film.
Posted by Steve Reed at 7:19 AM

I love the bin and the colorful mural...You find some strange things on your walks. How is Olga doing?

"Who am I to question?" Err... unless this blog has been taken over by somebody else you are Steven Huckleberry Reed, late of Florida, New York City and Morocco. If you are having trouble remembering who you are you need to seek medical help immediately.

I would never guess that the store was for children's clothing. The penguin waste bin is awesome. I think the yellow shoe would make a great planter. Yes? The artwork for the cafe is quite interesting. You have a super day, hugs, Edna B.

Specifically, it's a rockhopper penguin trash bin. I put "Penguinologist" on my business card because I thought it was funny, and then I became obsessed with penguins and now I feel like an imposter. So many penguins, so little time.

Excellent shot of the kid running in front of the NASA shop which yes, is a strange concept for a business. Are Russians involved?
Can you buy the clothing there or only online?
And penguin trash cans? Why?
So many questions.

I love the penguin trash can! I need to figure out how to get one in my life...

I'd say that shoe is wildly impractical for anything! and where else would a children's clothing store be but in Child's Hill?

I watched "Judy" last week and enjoyed the film and acting but I agree, the story itself was hard to watch. I love that garbage container. It's very imaginative. I feel like I spent my entire Sunday in the Verizon store getting a new phone. Getting a new phone these days is a lot like going to the doctor, lots of waiting and waiting.

Interesting sights on that walk. Love that garbage can and mural.

Finding one shoe in the park gives me the creeps, what on earth happened there?
Briony
x

We watched and enjoyed Judy, too, and Renee was on screen virtually the entire film. That had to be somewhat difficult.

When I see a single shoe I always wonder how a person could lose one and not notice. I suppose if it was being carried around, fine, but why? WHY? lol

Ellen already said what I thought about NASA clothing for children - Childs Hill, yep, very appropriate :) I like Edna's idea, too, about using that show for a planter. It hangs very nicely by the heel. Something trailing would look good in it!

The trash bin is a work of art, as is the photo of the lone shoe hanging on the fence. There is a story there and I am betting it involves alcohol. I like the idea of using it as a planter.
That storefront looks suspicious to me. I would bet there is more going on there than meets the eye.

shoe on the fence, a study in yellow- much more impressive than a banana and duct tape. You would be a billionaire with that one.
Judy has broken my heart so many times I do not find it necessary to view that movie.

I just read the new Newbery Award Winners list. Will you add them to the end or the top of your list? I began reading Newbery and Caldecott books when my daughter began reading. I enjoyed them as much as she did and bought some of the titles for my nieces and nephews. I applaud you for challenging yourself. I read every day and often read several books at once. I cannot imagine living without books.

We're rooting for you.

E: Walking in a city is always interesting. The population density guarantees that there will be weird stuff on the street!

Edna: That planter idea is brilliant!

Vivian: Penguins and K-Pop! You're a Renaissance woman, Vivian.

Ms Moon: Yes, indeed. Many questions. I don't think you or I could buy clothes in that shop -- I think it's just a showroom, presumably for wholesalers. I suppose Russians COULD be making the clothes, but I'm betting on the Chinese!

Bug: You know, I didn't even immediately recognize it as a penguin, but of course that's what it is.

Sharon: Ugh. I do not envy you your phone outing.

Robin: The mural is nice, isn't it? Very colorful.

Briony: I know! You gotta wonder. I thought maybe she broke her heel, but the heel is fine. Maybe she broke the OTHER heel and threw it away and just walked home barefoot.

Catalyst: You know, I didn't think about that, but you're right -- she was in every scene.

Jenny-O: It IS the perfect ivy planter! I squirm only when I think that the person, if carrying her shoe, was likely walking barefoot. I used to go barefoot when I lived in the country in Florida but I would certainly NEVER do it in London.

Linda Sue: That's true! I should enter it in Art Basel Miami!

BobbieJean: Yeah, they were just announced, weren't they? I'll definitely add the new medalist to my list. I'm enjoying them, too! They're all terrific books! And like you, I couldn't imagine living without pages to turn. I love the fact that I can be anywhere and escape into entertainment as long as I have something to read -- no batteries or Internet required.