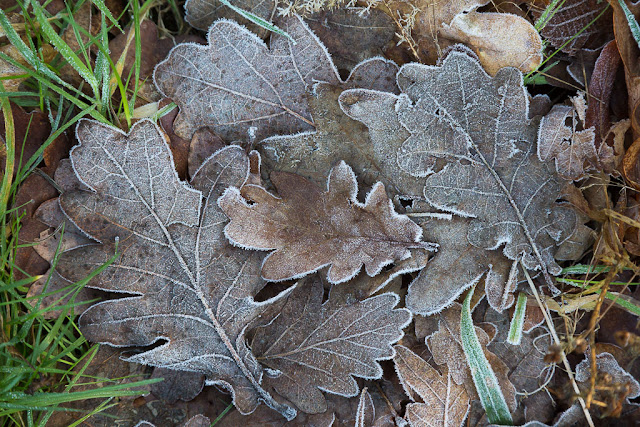 More sunshine yesterday, a welcome development. I took Olga for a long walk on the Heath. We usually follow a circle that runs north toward Highgate and south again to Parliament Hill, but this time we changed up our routine. We avoided some of the areas near Highgate that get muddy -- in the winter and early spring, parts of the Heath are barely passable because they're so wet -- and we also skipped Parliament Hill because, frankly, Olga doesn't care about the view. She wants trees and squirrels.

So we stuck to the woodsy paths.

The leaves in the shadowy hollows were covered with frost. But despite the chill, tons of people were out, soaking up the sun. (At least as much as possible while wearing a coat.) 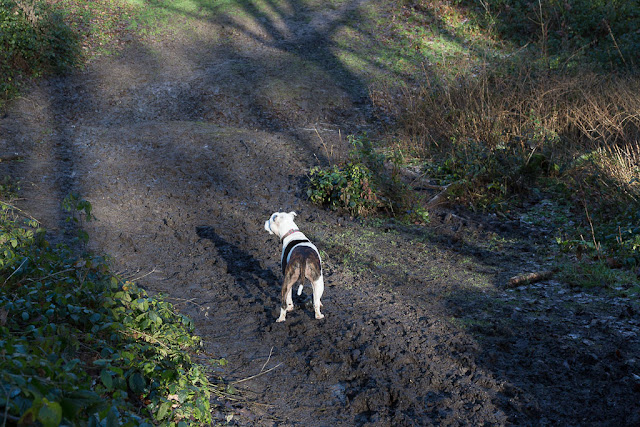 Holy mud-bog, Batman! See what I mean? Fortunately I have two pairs of Merrill shoes that work really well in muddy conditions -- my feet never get wet. 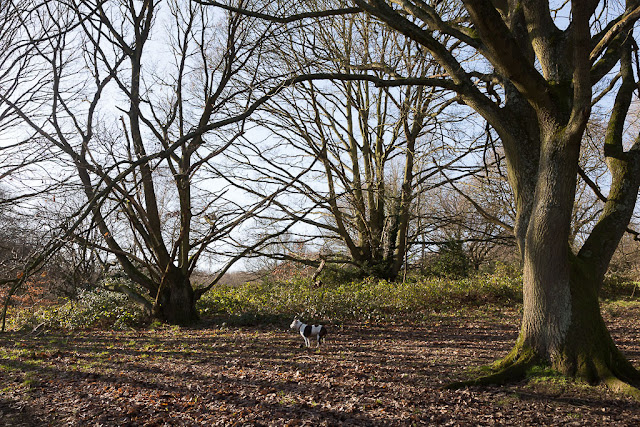 Back home again, I set up our new Olga-cams, which Dave bought for Christmas. They'll allow us to check on the house and the dog remotely, using an app on our phones. You may remember that we had some before, but when we got our new Internet router a few months ago, those cameras stopped working. The problem had something to do with the megahertz of the router signal -- I don't pretend to understand it, and no matter what I did, I couldn't get them to function again. Technology!

So, yeah, we have new ones.

Remember how she said "cavorting" is an underused word? Well, she later recounted writing a letter in which she called someone an "empurpled blowhard," and although she eventually regretted the letter, I think that's a fantastic term. "Empurpled" is definitely an underused word. I know several people who have a tendency to become empurpled. In fact, at times, I may be one of them.
Posted by Steve Reed at 6:30 AM

I am sure you get "empurpled" when kids who have borrowed computer chargers don't bring them back as requested. You may even get "emreded" to a point where steam is coming out of your ears like vaping smoke.

Three things to love about this post.
The frosted Oak leaves are just beautiful.
Olga's stance, and the word 'Cavorting'.
I used to cavort a lot but stiff limbs get in the way now, lol
Briony
x

Beautiful pictures.
I have never heard the word "empurpled." And yet, when I just typed it, I was not told that it's misspelled.
Who knew?

Empurpled blowhard! Sounds like a mobster sociopath we all know, except that one's more orange than purple.

So glad that you and Olga got out for a walk. It looks as muddy there as it is here. Thank you for the new word-- empurpled. I love learning something new everyday. 37paddington made me laugh. I need that everyday too. Mission accomplished!

I LOVE that photo of the leaves. "Empurpled" is a wonderful word. I'll probably be using it this week as the impeachment trial proceeds.

I love that photo of the frosted leaves. And I love the way Olga stands and looks around as though this is all her domain. Of all your new words, I like cavort the best. It's the most fun. You have a wonderful day, hugs, Edna B.

empurpled blowhard describes Trump almost perfectly. unfortunately it doesn't convey his tendency to cruelty. once again I'm jealous that you have that great park so near.

When I hear “empurpled” I immediately think of many Baptist preachers I have known. There was one revival preacher who I was SURE was going to have a heart attack!

Beautiful leaves, the frost and winter sunlight is a good combination.
Yes, get out in the light as much as possible..a change of air in lungs is as good as a dose of sun, too, when one is cooped up by the weather

What a great word! Are you a fan of Haggard Hawks?

Mud and frost get very slippery.

Oh my, that photo of the oak leaves with frost on them is striking - very muted colours but so lovely.

YP: I think empurpled might be worse than emreded, actually!

Briony: I don't cavort much anymore either!

Ms Moon: I always associate it with rage -- it seems it's usually used in that context. I couldn't tell you where I first heard it!

Robin: I always feel like England corners the market on mud in winter and spring -- I'm glad to know others are suffering too!

Sharon: Indeed! There will be many opportunities for empurplement, I'm sure.

Edna: Olga definitely considers herself the master of the Heath. Or at least one of them.

Ellen: That's true. It doesn't convey the severity of his behavior or its ramifications.

Catalyst: Isn't it? I'm going to use it more.

Bug: Certain preachers are DEFINITELY empurpled from time to time!

GZ: It's true. I always feel better when I get exercise and outdoor time.

Penelope: I hadn't heard of Haggard Hawks until I looked it up, prompted by your comment. Brilliant! I'm going to pay more attention to it!

Red: They do indeed! I've slipped and fallen on the Heath before but this time, fortunately, I didn't.