New Collar, and a Panto 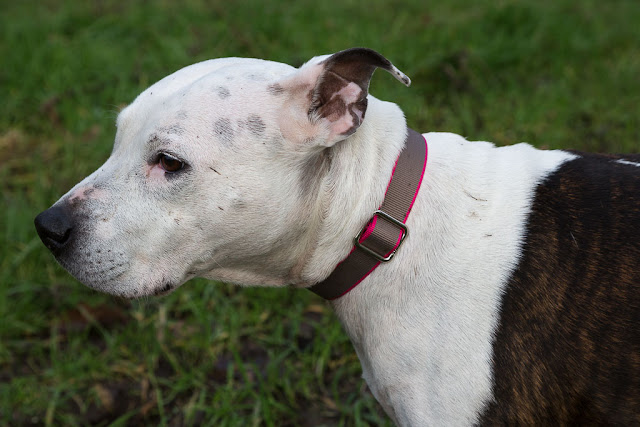 As promised, here's a photo of Olga's new collar. Given the price, you might have expected something with more bling, or maybe even a designer label. But no -- this is the same brand and style as Olga's previous collar, and although it's a premium brand, it's probably not a name you would recognize (Harry Barker).

Olga's old collar was pink with green piping, and I'd have bought that one again but it was unavailable. So I opted for taupe with pink.

The reason this collar was so ridiculously expensive (about £42, or $55) wasn't really due to the collar itself, which was only £17.60 ($23). It was due to all the secondary costs -- £11 for shipping from the USA, plus a £5.66 customs duty imposed by the British government and an £8 Royal Mail "handling fee." If I'd known all that was going to rain down upon me, I'd have found something similar here in Britain. But oh well.

Olga is pictured on the Heath, where we went yesterday. As you can see, by the time I took the photo at the beginning of our walk, she'd already christened her new collar with a light spatter of mud. 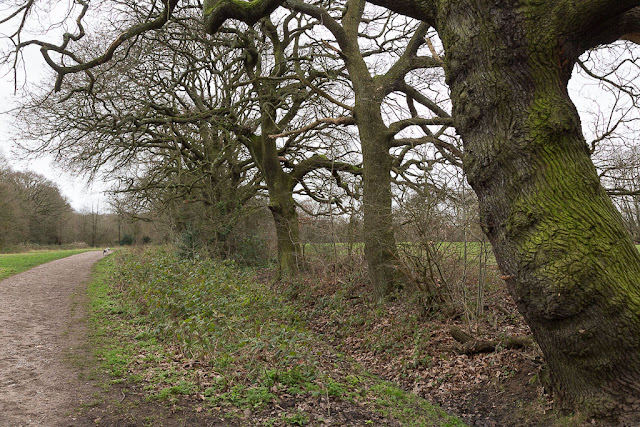 It turned out to be a fantastic day to walk. It was cloudy and a bit blustery, so not many people were out. It felt like we had the Heath mostly to ourselves. (This is one of Olga's favorite areas for squirrel-hunting, by the way -- there are always lots of squirrels in these trees. As you can see, she's way up ahead on the path, scouting.) 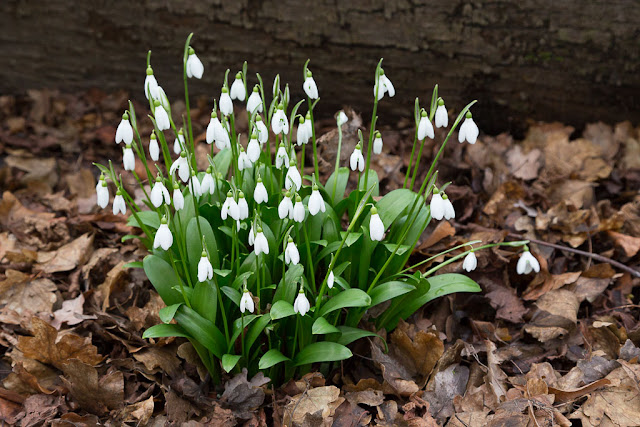 This clump of early snowdrops on the West Heath is, reliably, in bloom before any others. (I take this photo every year. It's become a tradition.) 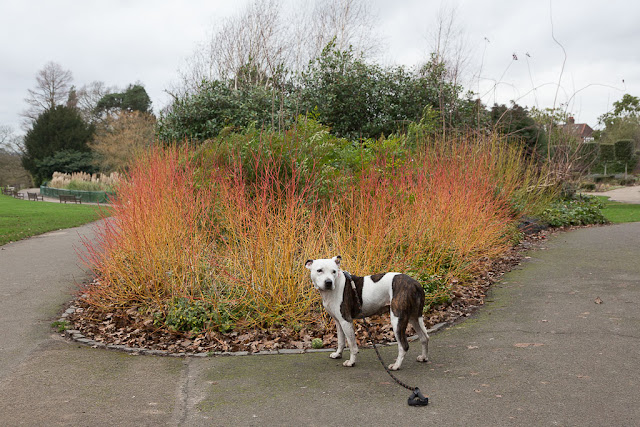 Afterwards, we walked back through Golders Hill Park, where Olga admired the bright yellow and red of the dogwood stems. (Well, OK, maybe I admired them, while she looked for squirrels.) These dogwoods are a different species from the American dogwood tree, but in the same family. They're grown partly because their stems are so colorful in winter. I don't think the American dogwood grows here -- at least, I've never seen it.

Last night, I had a new British cultural experience. I got together with some co-workers and went to a panto, or pantomime -- my first one! Pantos are small-scale theater productions involving cross-dressing actors, slapstick humor and audience participation, and they're traditional in Britain, particularly around the holidays. The one I saw was based on Pinocchio, and it was hilarious. (Admittedly, I'd had a few pints beforehand.) I realized as I watched that the well-known "Rocky Horror Picture Show," which so many of us have seen around the world, is basically a panto.

It's surprising that it has taken you so long to take in your very first pantomime. As you suggest, it is a happy feature of wintertime in Britain. Many people who attend pantos would never think of visiting theatres at any other time. Any pantomime plot is just a basic structure around which new scripts are developed - usually with topical references. These are the most commonly performed pantomimes: "Cinderella", "Puss In Boots", "Aladdin", "Dick Whittington", "Mother Goose", "Babes in the Wood", "Jack and the Beanstalk" and "Snow White and the Seven Dwarfs".

I like the appropriate name of 'Harry Barker' lol
I haven't seen any snowdrops yet but always welcome them when I do.
The collar has been shown of beautifully but what a cost.
As for pantomime, they are not my cup of tea, they just really annoy me, maybe I'm just an old grouch. lol
Briony
x

I checked, and Amazon carries Harry Barker dog collars. Do you have an Amazon there, and if so is it free shipping for you? I love those snowdrops. They look like Spring can't be far behind. Your dogwood is so different from ours, yet it is beautiful. Olga looks so pretty in her new collar. You have a super day, hugs, Edna B.

Olga looks lovely in her new collar. Nice to see those snowdrops too. Any hints of early spring are such a welcomed sight.

I so envy you and Mr. P. your walks.
And I'm sure that Olga is the envy of all dogs who see her. It's a beautiful collar and she will wear it for years.

the Panto sounds like fun. Minnie will be five in March and she's on her 3rd or 4th collar. she's chewed the buckle off two of them.

The Panto sounds like a fun way to spend and evening with friends. Olga is looking very good in her new collar. I wondered if part of the cost was shipping and taxes.

the dogwood branches /bushes/ sticks are gorgeous - cheerfulness in winter, great idea! The collar, dang! well, it is on and it is doing it's job and i suppose Olga is grateful, though she may prefer to be naked. Rocky Horror is the best! My son's favorite since he was three years old- and yes , he watched adultish silly films - he did not grow up to be imbalanced, all part of his cultural funding, you understand.

The snowdrops are pretty, as usual. Olga looks quite sporty in her new collar.

I miss a good panto. There was never a xmas without it when we lived in Ireland. My mother in law would get box seats reserved and we behaved uproariously.

Ah, that explains the exorbitant price on the collar! It does look good and sturdy and the fact you got so many years out of the previous one bodes well for this one too.

Our dogwood is all red. Interesting to see the difference of colour in the one in your photo.

Steve, as to your car question from yesterday, I sent the picture to my "car guy" in Southern California, who sent it to *his* car guy in Boston, who identified it as a late 50's A.C. Ace, predating the A.C. Cobra. Frankly, I don't think I ever heard of an A.C. Ace before but I searched for it on the Mighty Google and it appears he is correct.

I have just read Tina Browns diaries on your recommendation. Just love it, her writing style is so insightful and entertaining. She does name drop but nothing as bad as the Nicholas Coleridge book which seems so boring in comparison.

Love the photo. She looks lovely in her new collar.

YP: This one was a panto with an adult edge. It definitely was not a children's show.

Briony: It does make me happy to see these snowdrops, even though they're always so ridiculously early.

Edna: Amazon here in the UK has some Harry Barker collars but they're not the style I wanted. Maybe Amazon in the states has more of a selection.

Robin: I agree. They're always so cheerful, those snowdrops.

Ms Moon: I fully expect it to last a while. They're very good collars.

Ellen: Olga has never been a chewer. That's one thing we haven't had to deal with, fortunately.

Sharon: I would definitely do a panto again!

Linda Sue: Rocky Horror seems completely harmless now, and it was so transgressive when it first came out.

Catalyst: Racing stripes! And THANK YOU for sorting out the car question! I've never heard of an AC before but yeah, it looks like either an Ace or a Cobra. (I don't readily see the difference.)

Sabine: Ha! Must have been fun to have that as part of your family tradition.

Jenny-O: Yeah, some of them are red and some are yellow. When they're planted together it's an especially nice effect!

Jennede: SO GLAD you took on the same book and enjoyed it! Sorry to hear the Coleridge isn't as good, since I have that one too. But I guess that's why Tina was the top editor.

E: Definitely better than her previous one, which was getting quite tattered.