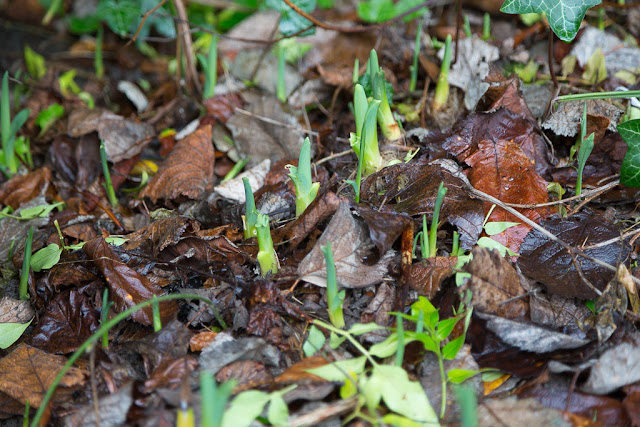 I've been out in the garden the last two days, trimming and neatening things up. I was astonished to find, when I pruned away a canopy of dead blackberry canes, that our daylilies are already coming up. It seems way early for that, doesn't it? I feel like winter hasn't even fully arrived yet -- we're still waiting for our first hard frost.

Our daffodils and other bulbs are sprouting, too. In fact it's been so mild I put the geraniums back outside. I won't worry about bringing them in unless a freeze is predicted. 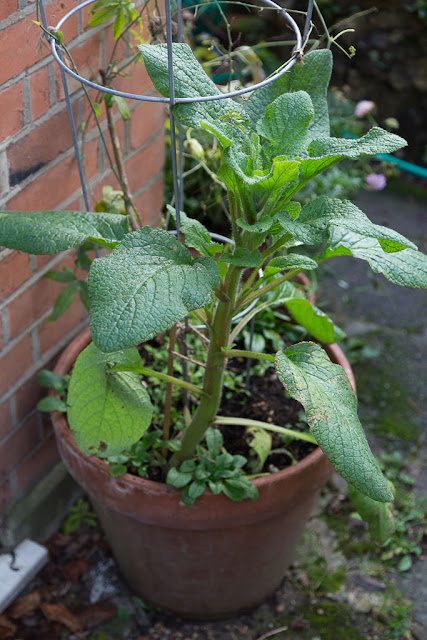 The mysterious plant (now tentatively identified as borage) that grew of its own accord in one of our flower pots is looking tall and robust. 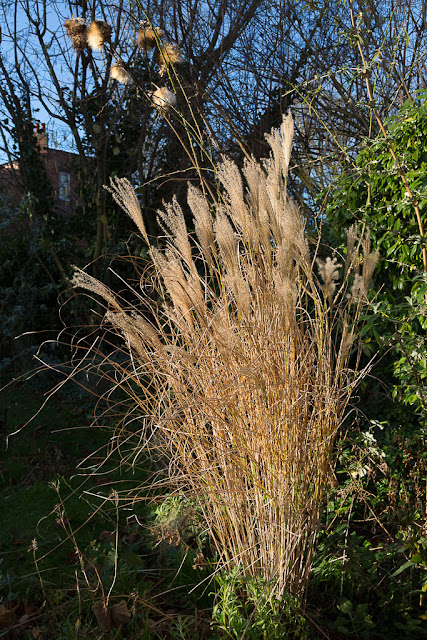 And although I trimmed away a lot of our winterkill -- four garden-waste bags full -- I left some behind. The golden brown miscanthus grass outside the back door, for example, still looks feathery and nice, especially when struck just right by the afternoon sun. The cardoon is still standing tall behind it, and I've left the teasels for the goldfinches. 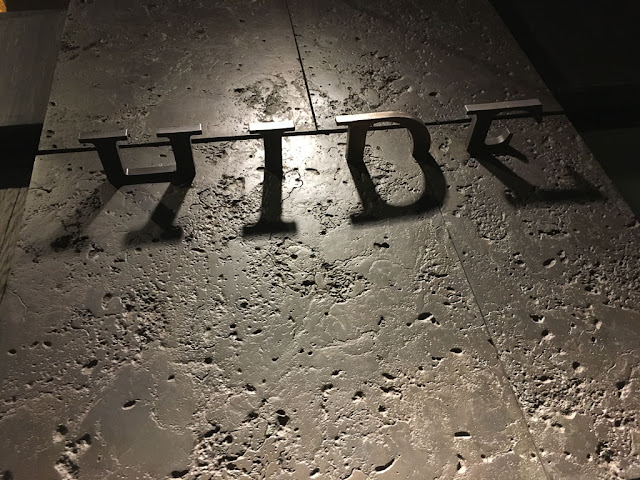 Last night, Dave and I tried a new restaurant -- Hide, on Piccadilly. This is the sign, which is pretty inventive -- the metal letters stick halfway out of the wall, horizontally, and are lit just so. The space has big, beautiful windows on Green Park, and we loved our meal -- the chef's tasting menu. I had the wine pairings, too, and that combined with gardening fatigue left me so tired by the end of the night it was all I could do not to lie on the floor under our table and go to sleep. (I have a feeling that would be frowned upon!)

I wore the jacket.
Posted by Steve Reed at 6:13 AM

If I saw a restaurant called "Hide" I would immediately jump to the conclusion that it specialised in animal hides. Eating leather isn't my favourite thing but I have had a few steaks that were leathery.

Hide has employed a most interesting way of using shadow and light. Clever!
We haven't gotten a hard freeze yet either. Huh. Guess this global weather change thing is real, maybe.
You think?
Some of my most tender plants have been frost bitten- the bananas in particular- but many things are just going along as if it were spring. I have firespike still blooming! And roses of course.
It's disturbing. I guess I need to get used to it.

oh you fancy man, that jacket is awesome. Sounds like a perfect way to spend a spring/winter evening. The name of the restaurant sounds like a command.
garden stuff already. We have had a freeze and will have more winterish days I am sure especially in February, that is when it usually sneaks up on us now, though nothing is predictable ,climate change, shaking us off.

That sign is very cool. I love that creativity. Glad you had a chance to wear your jacket there.
We've had some frosts and freezes here, but yesterday the temps were in the 60s and the sun is enticing all the greenery to shoot up. Winter weather tricks the garden sometimes.

It's very much wintery here. No plants coming up yet, thank goodness. Your plants look awesome! And I love love that jacket! You have a wonderful day, hugs, Edna B.

there are some things I would prune back but it's not unusual to have a late freeze so I keep the dead wood on to protect the green wood. and so far the porterweed is still viable with new green growth coming up from the root. all the early spring wildflowers are coming up as is the rocket larkspur and the love-in-a-ist and the poppies.

what a clever sign for the restaurant. and I'm glad you wore the jacket, it's very cool. but we need a picture of you in it!

Looks You Are Going To Have To Fabricate A Hop House Of Some Sort - I Hope Winter Is Coming But Who Knows As We Have Embarked Into Uncharted Territory - I Request Olga Photos In Your Next Post - Also, Speaking Of Photos, Posted More Egypt Photos - In America, We Are Way Censored Regarding Our News - Whats The BBC Saying About The Middle East -Apparently Iran's Internet Has Been Shut Down - The 5 Times A Day Prayers Are VERY Well Attend And Even Done Right Their On The Streets - Little Stressful - When The Dude Was In Jordan, Next To Ground Zero, I Wasn't Too Worried But The Donald Has Quickly Changed That - Any Update Would Be Greatly Appreciated - Thanx In Advance

On one of my trips to London in February, I saw daffodils everywhere and I thought that was early. The first part of January seems way too early. The restaurant sounds wonderful and I'm glad you wore that fabulous jacket.

Yes, that jacket is outstanding though it would not have appeared so if it was clothing a man snoring under his dinner table.

That is a very cool sign and highly appropriate for your blog, titled as it is!

We've hardly had any cold weather here yet either. Our winter is supposed to be a series of snowstorms and rainstorms, speaking of which we have a snowstorm forecast for tonight and tomorrow . . . I'll send you some of it if you like :)

I am thrilled that you wore your jacket - I'll bet you looked fabulous in it!