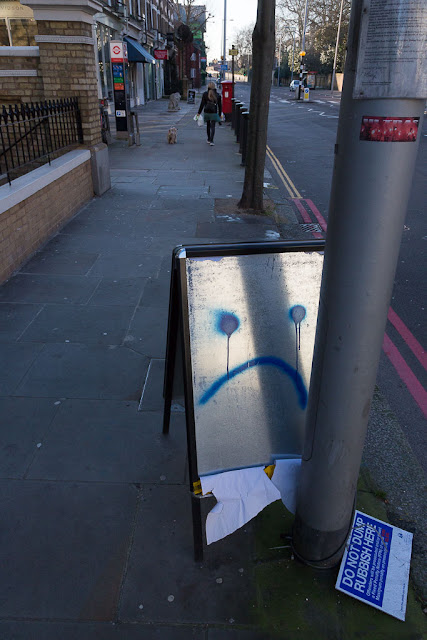 This has not been a great week. I've been in a persistently blue mood. Maybe I have Seasonal Affective Disorder? I've been feeling frustrated at work and impatient at home. I'm going to try to get out today for a photo walk and see if that makes me feel better. I was only able to walk to work one day this week, either because it was raining or I didn't leave myself enough time, so I have been seriously deprived of daylight and exercise.

To make matters worse, Dave and I have both concluded that we're about to be evicted. The fact that the landlord insisted on an early-break clause the last time we signed our lease -- a clause that takes effect this month -- and now suddenly wants to come and visit the property seems pretty suspicious. We think she's probably about to give us notice and put it on the market.

Which I suppose isn't a tragedy. It will just necessitate another change, and maybe that's not a bad thing. We've been here a while and I wouldn't mind some new surroundings, though I'd like to have just one more summer in our garden -- long enough to see the honesty and hollyhock seedlings I planted last year come to fruition. (I suppose I could dig some up and take them with me.)

I do dread the work and disruption that comes with moving. We have quite a bit more stuff than we did when we came to this flat, so the moving itself will be a bigger task, and all the changing addresses and disconnecting and reconnecting services will be tedious.

You're probably wondering, "Why don't you just buy the place where you live?" While we could probably afford to buy somewhere, I don't think we could afford this place. It's likely to be way too expensive for us. We probably should consider that option elsewhere, but all the paperwork and bureaucracy seems daunting.

Anyway, I shouldn't get ahead of myself. I don't know what's going to happen. But these are the thoughts whirling around in my head at the moment.

You'll be inundated with advice and opinions.
Here's my twopenneth.
If the owner (see how I avoided the landlord/landlady hoohaa) is selling and you meet her, make it work for you. She might be reluctant to disclose her reasons for selling but perhaps she wants to head off any downturn in the London property market which might result from Brexit. If there's any hint of that it could be to you're advantage in considering buying. Rental property owners often own more than one property and are very aware of property values.
You can do you this, you're personable, diplomatic and smart.
At the very least it will provide you with a distraction making this crazy plan when you have a sleepless night worrying about the future.
Of course if all that comes to nought and fails don't hesitate to point out any property shortcomings, including living next door to Mrs Kravitz.
My platitude for the day: everything will be alright in the end.
:-)
Alphie

This is one of the drawbacks to renting isn't it?
We have rented our maisonette for since 1965 and are what is called 'Protected Tenants'. This used to be a common thing but of course is no longer as Landlords are not wanting to commit to letting for long periods any more.
Buying or renting in London is such a problem as I know from my Grandson's problems.
No wonder you are blue with so much on your mind.
Steve, it will all sort itself out believe me and you will look back one day and wonder why you got into a pickle over it.
Remember that 'Everything Passes' and a change is as good as a rest.
Hugs
Briony
x

It does seem suspicious that the landLADY is coming for a look round but perhaps she is just checking up on her investment at long last. Maybe she will see sweet Olga and go "Awwww!", thinking to herself, "Now there's no way I can evict these guys!"

Oh, Steve. I hope your speculations prove not to be true.

I agree with Alphie Soup and Crafty Cat Corner. I'm sorry you're having to worry about this, but some times it does happen that we have to move. Mayhaps it would be wise to start looking around for a place to buy. And yes, I would dig up and take some of my favorite plants with me if I did move. Decisions like this would make anyone uneasy. I'll pray that she's just comimg to see how well you've been taking care of her property and that you're not being evicted. Try to have a good day, hugs, Edna B.

Involuntary change can be scary. The universe heard your plans and then laughed and laughed. But what if a move will turn out to be grand? Great new neighborhood to explore, wonderful new friends to make. Downsizing and keeping what is important And donating the rest.
And just imagine all the good blog fodder!

I hope that's not what the owner has in mind when she comes to visit. I also hope that you get out for a good long walk with Olga, and that the sun is shining, and that there are a million beautiful things that catch your eye and make you grab the camera.

Oh wow, that does sound very plausible given that agreement you signed. I'd be dreading the job of moving too. Packing and unpacking is such a chore.

yeah, forced change is a bummer. and if that's in the cards hopefully she will give you enough time to find a good place instead of booting you out and you have to take whatever you can get. or she may just want a good look at the property. who knows when the last time was she visited. seems to me if she was wanting to sell she wouldn't be concerned about making changes to the front. or maybe that's why she wants to make changes to the front, increase the curb appeal. well, it will be sad to lose the garden but perhaps your new place will have one as well. if she does sell, would it be the whole building or just your flat?

I am so sorry to read about this. Moving is one of life's more tedious events. We're hoping that we die in this house because I just don't want to do it again!

Oh, Steve. I hope that you don't have to move, but if you do you may end up loving the next place! I'd definitely dig up as much of the garden as possible and take it with me.

Hang in there. And take heart, spring isn't all that far away.

I've noticed too how the gray landscape and gray skies are more conducive to feeling dreary than the snow reflecting sunshine that we have now. And definitely having something heavy on your mind makes for difficult days.

That would be a rotten thing for your landlord/lady to do to you but it does look suspicious with the timing, doesn't it?

Good luck. I hope it ends up well for you. And I hope you get out for a walk, because there is no better pick-me-up than fresh air and the distraction of nature, in my opinion.

Yeah, there's a lot to be blue about these days. It's good to prepare for the worst, but you might be pleasantly surprised.

I look forward to your street photos. I'm a big fan.

this added to my anxiety a little bit,
the garden, the close proximity to the HEATH, finding something as nice as what you have...Lucky that you do not have tons of stuff to shift- if your intuition is correct. February and march are depressing here, dark and damp and cold. I usually pan a trip in February, the planning is nearly enough as I rarely follow through. You live in such a nice neighborhood= pretty sure you will do well to find another. Fingers crossed

I can understand your anxiety.

Alphie Soup makes many good points as I was also wondering about property values post Brexit.
I hope the owner is just checking on her properties and not looking to evict good tenants.
I would find it harder to leave my garden than my house but would not want to give up either.
I"m hoping for the best for you, Dave and Olga.