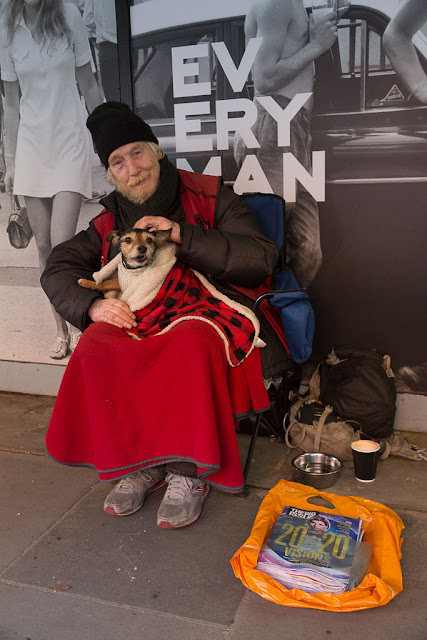 When I was in Chelsea earlier this week I passed this gentleman, sitting on the sidewalk with his dog. The dog was enthusiastically licking his face, which would have made a great picture, but of course it stopped when I did and eyed me warily. I asked the guy if I could take a photo anyway, and he said yes.

So here's a portrait of Darren and his dog Pip, who is 14. Darren sells "The Big Issue," a magazine that homeless or disadvantaged people purchase and then sell on for a profit. It's meant to give them a job rather than leaving them to panhandle on the street. Of course I bought one after our quick photo session.

When we talked about Pip's age, I told Darren I had a nearly ten-year-old staffy. "Oh, staffies can live a long time," he said, and told me he knows one that's 15 and another that reached the ripe old age of 21. That seems a little incredible, to be honest, but it was encouraging to hear!

I finally finished "David Copperfield" on Wednesday -- all 877 pages. Whenever I groused about the length (which I did even though I really enjoyed it) Dave would say, "But it's just a book about a magician."

I've been on a household cleaning spree. Our very damp winter caused a patch of black mold to appear in a corner of our living room. We've had this problem before -- I think the outer wall of the rear extension of our flat, which contains the living room, isn't sealed as well as it probably should be. Anyway, I wiped the area with some warm water and a bit of bleach, which seemed to clear it up for the time being. Mold is not something we want to tolerate.

I also vacuumed under our bed, which requires substantial moving of furniture. And once I did that I began seeing dust and grime elsewhere in the bedroom, so I eventually wound up cleaning all the windows and windowsills. I discovered that the lower bedroom windows open -- in the five-plus years that we've lived here, I don't think we ever realized that!

Somehow we left our shaving cream in Egypt. I'm bummed because it was a can of aloe vera Barbasol from the USA -- I try to bring one or two back whenever I go to the states. It's my brand of choice. (I could order it online but it costs about $10 a can, not including shipping, which seems ridiculous.) Anyway, now I just have the crappy German shaving cream I bought during my Buddhist retreat last spring. Oh well -- why not use it up, right?
Posted by Steve Reed at 7:10 AM

"But it's just a book about a magician."
Dave's a funny man.
Alphie

I love the candid picture of Darren and Pip and the ironic dissonance caused by the advertising behind them. Who would be homeless at this time of year? During the election - not enough was made of the homelessness that increased exponentially during the Tory reigns of Cameron, May and Johnson. We never used to see any homelessness here in Sheffield. Now you can't miss it.

I love the photo too. It's a beautiful thing to see someone who lives in the most difficult of situations manage to care for a canine companion. It shows how much we humans need companionship. As you well know, I am not the most ardent of dog lovers but I think that in different circumstances I would be far more apt to have a dog or two. It's not that I don't love dogs, it's just that they do require caretaking and constant love and attention and I suppose I've just still got a lot of people to shower those things on. And perhaps I am lazy.
But honestly- that's a very honest photo of what I am sure is a most profound relationship. Thanks for sharing it, Steve.

Darren and Pip look quite happy together. It's a great photo. Dave's comment about the book make me laugh!

Just looked up your shaving cream - only $1.47 at Walmart. I can see why you don't want to pay ten bucks. I'd bring some over with me if I could fit it in my bag.

Love the photo of Darren and Pip--how the love and companionship they share shines through.

Love that photo of Darren and Pip. I have been surprised to learn over the years how many homeless people have dogs. Such companionship. A wise and good choice of enduring love and friendship.

that is a great picture. dogs can bring a lot of joy to a life. it doesn't really surprise me then that so many homeless people have dogs.

My friend goes out of his way to buy "the Big Issue", I did not know about it but now I do, so whenever I am in London i do that too. You got a wonderful shot of the guy! I understand about the shaving cream. I would not hesitate to order more online, what is ten bucks, nada- a good cup of coffee or ten packets of biscuits from poundland. Life is short.

At least Darren looks warm, with his blanket. And that Dave, what a card! Who knew?

I looked up your shaving cream on Amazon. It is $10.13 for a two pack and free shipping. Do you have Amazon in your area? (10 oz. cans) I love the photo of Darren and Pip. I hope he earns enough to feed both of them. Wouldn't it be nice if we could wipe out homelessness? You have a wonderful day, hugs, Edna B.

It was recommended to me years ago to use alcohol to kill mold, as a better alternative to bleach, and it did work better for me, especially on vertical or unfinished surfaces where you can't easily let bleach sit for the recommended time (walls, bare wood). If you have Lysol Disinfectant Spray (58% ethanol) in the stores there, that contains what you need, and it's easy to use. I used it after scrubbing the mold off the walls (soap and water) because the spray itself is not a cleaner, but I also used it on bare wood under the basement stairs and it has kept us mold-free ever since with no further applications. Just a thought.

That picture is both heartwarming and heartbreaking. And I hope he's right that staffies can be long-lived.

I've got some mold in my bedroom closet - and I don't know what the heck I'm going to do about it because the ceiling is VERY high in there & all my clothes are in the way. I was sort of hoping it was spider eggs or some such because I wouldn't care all that much about them, but Mike says no. Ha!

Hi Steve,
I am not sure what the home store has in the UK but since I have worked in remodeling and demolishing and a survivor of a flood I thought that I would pass this on to you.
Spray the affected wall with bleach (Not Diluted) and let dry at least 24 hours.
We have a product here called Kilz or Kilz2 so I am not sure of the name of it in UK but it is a blocker that will help keep that mold from spreading.
Your best bet would be to spray the entire wall with bleach and then Kilz the entire wall. Yes I know that means you will have to repaint the entire wall but MOLD is dangerous.
I learned the hard way while raising kids that were always sick and when we moved out of that house they suddenly became well! I had never heard of black mold back then.
If you can find where the wall on the outside is not sealed, I hope you can seal it off because it will just get damp again and start growing where ever it can and spread to other areas.

Good luck and I hope that this info helps you. I totally love how you spring cleaned early haha... I need to do the same here. Actually maybe just sandblast the entire area and start over might be easier... :( Ha!

Another mould suggestion for your Lifestyle Blog: it is said that bleach doesn't kill the mould but just renders it colourless, however a simple solution of water and household vinegar is what I use in our ordinarily humid climate (but drought stricken right now). If you've got some microfibre-type rags, use them but don't double-dip in the solution and chuck straight away; it's easy to spread the spores.

Oh I forgot to mention that I love the photo of Darren and Pip. I looked at Pip and was reminded of my Cisco. I really miss my Cisco and I hope that Olga is with you for many years to come.
That is a great photo and I wish them both all the best for 2020. ttyl. Beth