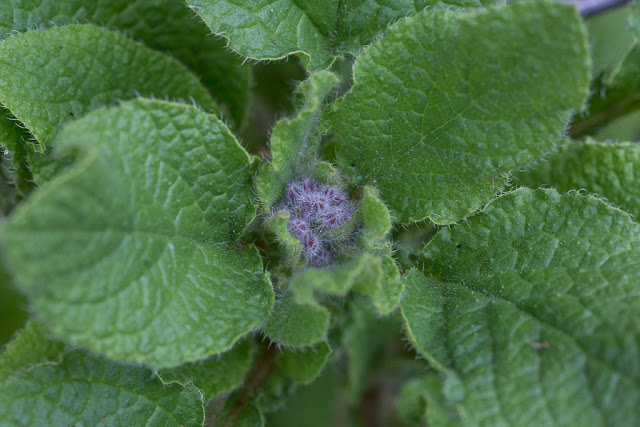 The mystery plant, which we now believe is borage, has generated a cluster of what appear to be hairy little flower buds. In the middle of winter! This plant doesn't appear to be fazed by anything. It would laugh at freezing temperatures, if it could laugh. It's also quite large -- about a foot and a half tall. I can't wait to see what it looks like when it blooms. 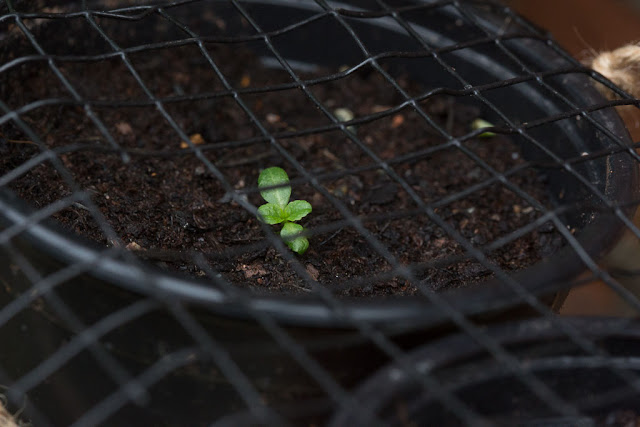 And this is what the teasel seedlings look like. They're not growing much, but they're not dying, either. (Despite being once pulled up by pigeons.) I think they're waiting for warmer weather, when they'll probably get more vigorously underway.

I know you're all wondering about yesterday's visit with the landlord. In short, I think we're fine. She gave no indication that we were going to be asked to move, and in fact she said several things that made me think she's happy for us to stay. It was one of those situations where I didn't want to come right out and ask, because I didn't want to invade her privacy or, God forbid, put any ideas in her head -- but I'm much more at ease.

We got off to an awkward start when, pulling into the parking space in front of the house, her husband bumped the back window of their car against the concrete overhang of the front porch. The window shattered with a bang. I couldn't believe it.

"Well, that was an entrance," he said, getting out of the car to survey the damage.

(I keep referring to her as the landlord, because her name is on our lease, but I suppose it's both of them, really.)

They seem like very reasonable people and we made some decisions about the exterior repairs that are needed -- some work on the fence, the front garden, the steps and the side gate. I also pointed out that some tree trimming may eventually be required on the walnut and the elders at the back of the property, and asked if she'd consider having our aged bathtub re-enameled. They seemed amenable to all that.

She praised our color scheme and our decorating, and said a couple of times that she was glad we were happy here and that she "wanted it to feel like our home." She even asked if we wanted a new bathtub -- but honestly I think the existing tub is fine. It just needs to be refinished.

So, anyway, I don't think she'd have said several of the things she did if we were going to be asked to move on. Whew!
Posted by Steve Reed at 6:57 AM

That's good news! Sounds like you could have asked for even more ! There was an item on local radio yesterday about renting etc. One of the landlords who was talking said that it cost him at least the price of a month's rent to change his tenants, so he doesn't unless really necessary!

What a relief! It is amazing how re-enamelling a bathtub can make it look like new and they don't make bathtubs like they used to - solid and substantial. Your LANDLADY seems like a reasonable woman as indeed does her husband - your landlord.

Well, the Lady and Lord of the Land seem quite amiable and lovely. I'm sure that they are incredibly happy to have you and Dave as tenants. Funny how something we can fret about so much turns into nothing. I am so glad that this was one of those occasions.

yes, sounds like you're in like Flynn (whatever that means). I imagine she's happy to have tenants that keep the place looking nice.

Yay! That's quite a relief.
Teasel is an invasive species here in northern California. It'll be interesting to see which species you have planted there.

I'm so glad the meeting turned out positive. However, that must have been quite a shock with that back window shattering. I think a start like that would have given me a terrible sinking feeling. I'm glad they took it in stride.

That's a big load off your mind.

Victory! I'm not sure most landlords understand the awesome power they wield over tenants. It's nerve wracking to be wondering if you're going to be chucked out. So I'm glad for you and Dave that the meeting went well, and bodes well for your future.

Congratulations on your landlord's (or landlady's) visit. Everything sounds great for the future.

whew!!!
Teasels re invasive weeds up here, no body likes them much, they used to be useful but now they are considered to be pointless. I love them of course, they suit my disposition. Cute baby teasel!

That's good news and she is lucky to have such good tenants, she should come by in the spring/summer and see the magic you do in the garden Steve.

Invite her back when the garden is in bloom and the work has been done/ Lucky break for you and Dave.

I'm glad to hear you feel surer now of staying in your flat. That must be a huge relief. Maybe the reason you've never seen her before is because she is an introvert? Did it strike you that she was? Anyway, if I were you I'd be having a quiet celebration right now. A big one might be tempting the gods, but a little one would be okay, and certainly called for - lol

Looking forward to seeing what those blooms look like!

That was hilarious about the landlord's shattering the window. I am glad you will be able to stay and also have some improvements.
Plants are having strange blooming everywhere. As though they do not know what season it is. It will soon be time to plant new flowers since you know you will be staying. Spring is just around the corner.

Hi,
I am trying to catch up but decided that I am going to comment here as I still have a ton more of posts to get thru.

Steve you might want to take the land lady up on her offer of a new tub. Ours was refinished when we moved into our place and she told me that she had all 4 units done because it was a huge discount for all 4. It was something like do 3 and get the 4th one free kind of thing.
Anyway ours is peeling and not just a little but a lot. My next door neighbor told us that hers is peeling and the other night another neighbor mentioned it.
Soap seems to eat away at the new stuff. She asked us when we moved in not to set bottles of shampoo and conditioner on the sides of the tub because it would eat it.
We don't set the shampoo bottles on the tub but we are all bad about not rinsing the tub out when we are finished with our showers or baths so... yeah it is becoming a huge problem.

I will let you get on with your day now and go and work on my own blog... Have a great day!

Frances: That's a good point. It's not only the risk of losing a good tenant, but the cost involved in letting the place sit empty and in any upgrades before the next one can be found. I hadn't thought about that.

YP: I think it's worth a try, and I don't see any reason to replace it if it still has life in it.

Ms Moon: Yeah, we were both so convinced!

Ellen: What DOES that mean?

Robin: I think it's the same species, but it's considered beneficial here. The Goldfinches love it. Maybe it's native and that makes the difference.

Edna: It's odd, isn't it? Primroses and a few other things flower in winter here, though, so it's not entirely unheard of. I just don't know much about this new plant.

Catalyst: It is indeed!

Linda Sue: Maybe they're invasive because they're not native to the Pacific NW. Could that be it? Here they're considered wildflowers and some of the bird species actually depend on them.

Comox: I know! We talked about how she picked the WORST possible time of year to visit!

Jenny-O: I don't think it's a matter of being an introvert. I think the management company is supposed to "protect" her from us -- in other words, we haven't dealt with her because we always have to go through them. That's part of what she pays them for!

Penelope: It was hilarious and alarming at the same time! I couldn't believe it!

Beth: I think we'll try it, and if it doesn't work we'll just cope. I can deal with a flaky tub. The tub itself is still solid and I see no reason to rip it out.

That borage will flower abundantly and attract bees. Ours has been going strong throughout this winter. It died back last summer when it was really hot and dry but came back when things cooled down a bit. Enjoy!