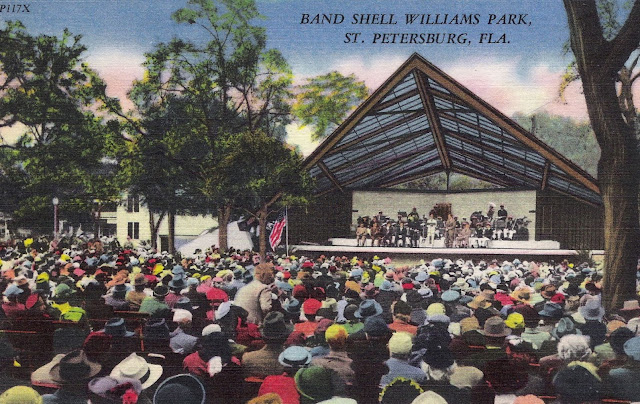 I just read a book called "The Postcard," by Tony Abbott, that I really enjoyed. It's for younger readers, but I could barely put it down, even though I could tell where it was headed plot-wise. It's about a boy trying to solve a mystery about his own family, and part of the fun, for me, was its setting -- St. Petersburg, Florida -- and its depiction of that area's history. Old postcards figure prominently.

It inspired me to dig out my own old postcards from St. Pete. These are only a tiny fraction of the sum total. I have hundreds of postcards from all around Florida that I collected in my thirty-plus years of living there.

Someone wrote on the back of this one (above): "It is warm to-day. Mabel and they will have a band concert in the park. They have 4 concerts a week." It's undated and was never mailed. 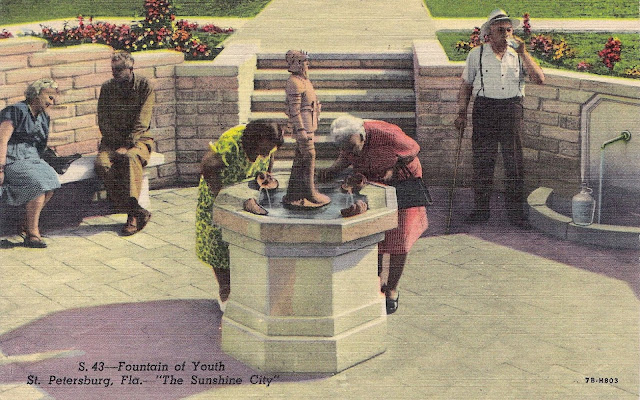 This one was mailed in 1955. "Dear Irma: I arrived here Weds. Have a nice room. I wonder where you are. Let me hear from you." The sender, Alice, added her contact information in Lakeland and mailed it to Irma in St. Petersburg, but it was forwarded on to Connecticut -- which I guess explains where Irma was. 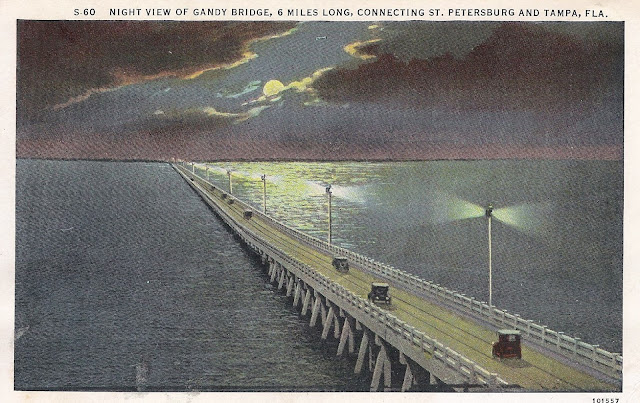 The Gandy Bridge appears frequently in "The Postcard." Can you imagine sputtering across that bridge at night in a Model T? (Or whatever those cars are.) Gives me the willies just thinking about it. 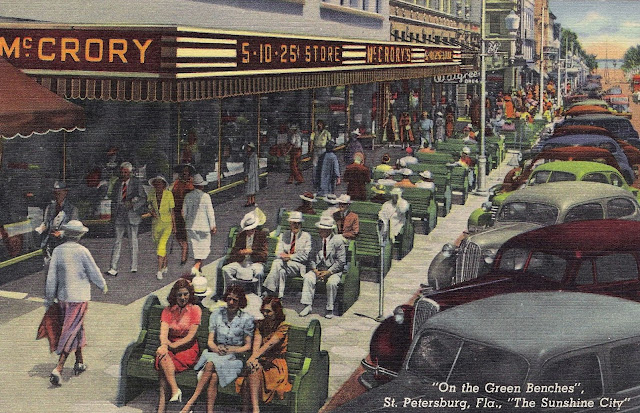 The caption on this unmailed card: "St. Petersburg is famous for its green benches that line the streets and parks. The green bench has become a symbol of the hospitality and friendliness of this city offering the residents and tourists a place to sit, rest, enjoy the weather, make acquaintances and watch the passers-by."

When I was young, St. Pete was working hard to shed the image of the green benches and become a more modern, youthful, energetic city. I don't know if any green benches are still around these days. 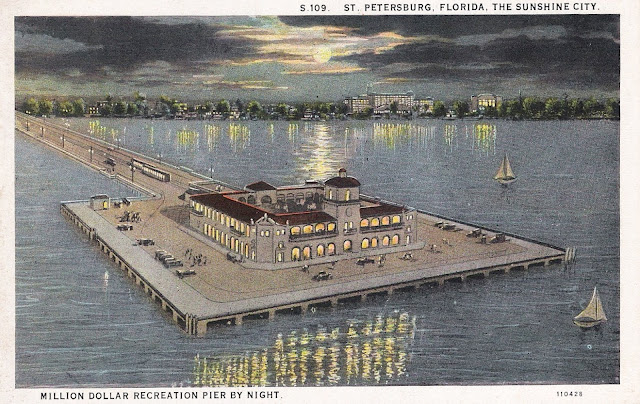 The Pier is another prominent landmark featured in "The Postcard." This is the old pier, which was torn down and replaced with a modern inverted-pyramid structure that I knew as a kid. That, in turn, was demolished recently and something new is arising in its place. (I see from the web site that the new pier is supposed to have a grand opening on May 30. Wonder if that's going to happen? I'm guessing not.) 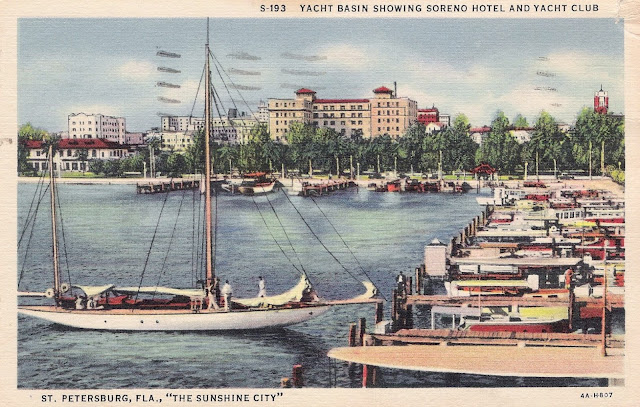 In "The Postcard," an old hotel is about to be demolished and the main character, a boy named Jason, explores the derelict building. The descriptions of the hotel reminded me of the Hotel Soreno, which really was demolished in 1992. In fact, its implosion was filmed by Warner Brothers and used in the film "Lethal Weapon 3."

This card was mailed from St. Pete to Paterson, N.J. in September 1945: "Arrived home safe and today is our hottest day, before the rains kept it cool. It feels good to be home again. I love it here. Love, Betty" 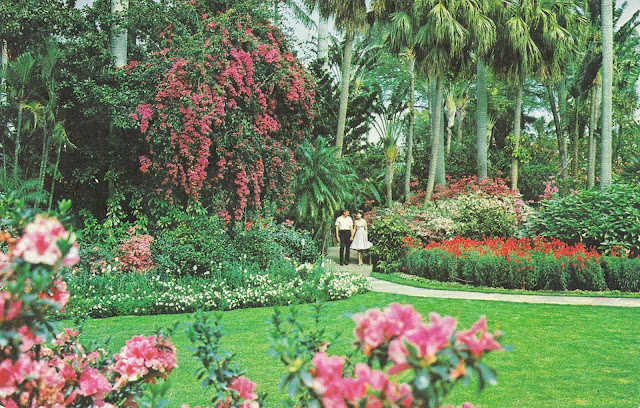 Sunken Gardens also features prominently in "The Postcard." I remember TV ads for Sunken Gardens when I was a kid, but somehow I have never been. I think I'll go next time I'm in Florida. It's still around.

This card, depicting "a young couple strolling leisurely through romantic Sunken Gardens," was mailed to Earl in New Jersey in January 1972: "Hope you are feeling much better by this time. We had a good trip down and we are enjoying the beautiful Florida sunshine. We both have colds right now but hope they will be better soon. It is nice here. We are near a park and lake. Ruth & Walter" 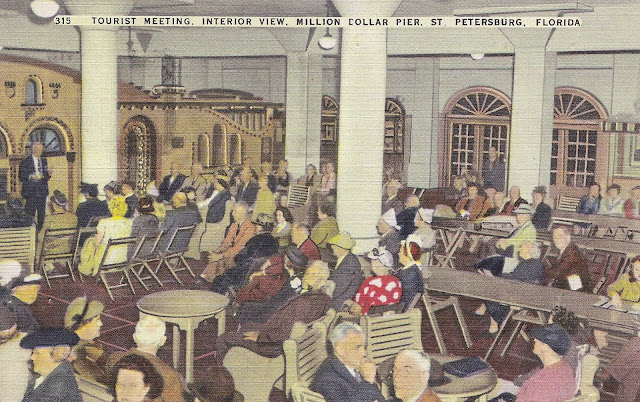 I wonder what on earth a "tourist meeting" is? It looks dreary as hell.

Mailed to Connecticut in September 1947: "Home sweet home. Arrived here Thursday just after the big blow, and it was some blow, not much damage done in this town BUT the East Coast sure did get it. Am very busy getting settled down again. In haste, BLB"

The "big blow" was the 1947 Fort Lauderdale hurricane. The card was mailed on Friday, Sept. 19, just a day or two after the storm passed over the state. 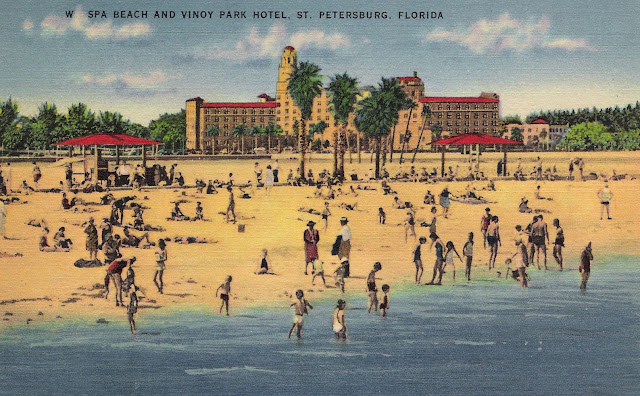 The Vinoy Park Hotel was a derelict wreck when I grew up in Tampa. Unlike many old hotels, though, it got a second act -- it is now the Vinoy Renaissance St. Petersburg Resort. This card was never mailed. 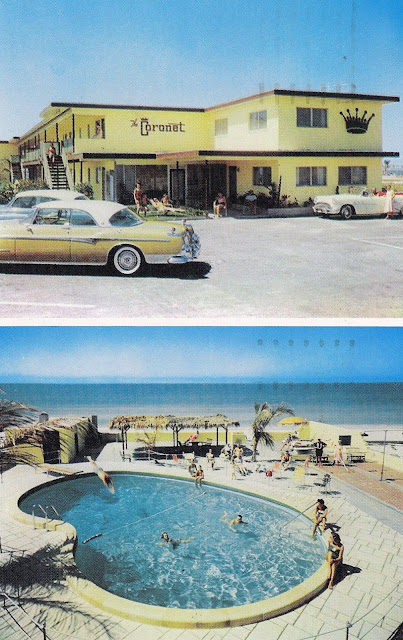 This motel is actually on St. Petersburg Beach, which is totally different from the city of St. Petersburg, but I couldn't resist including it because I am a sucker for a mid-century motel. It was mailed in June 1955, to Edward in Tennessee: "We are staying here. I will be here 2 weeks from to-day, till July 7. So come on here if you come by car. If you come by bus call me and I will meet you. Love, Ruby" 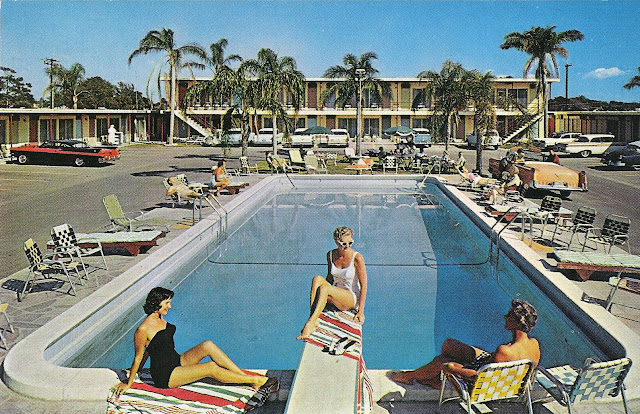 An unmailed postcard dated 1959 from the Plaza Inn Motel, which apparently had "decorator-inspired interiors" (whatever that means) as well as this "spacious pool." I've never understood motels with the pool in the parking lot. I bet it just bakes. 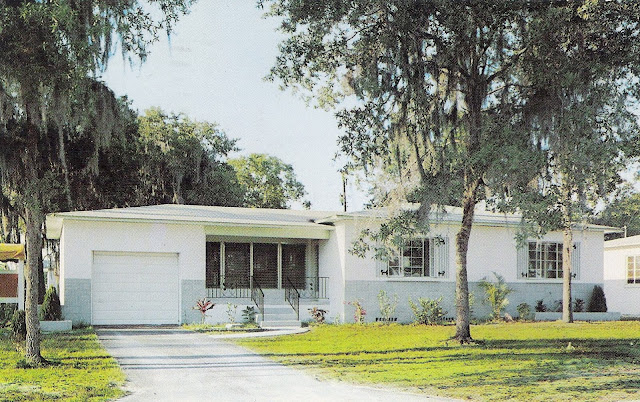 And finally, a house that reminds me a bit of Jason's grandmother's in "The Postcard," with its jalousie-windowed Florida room. This two-bedroom 1954 model was built by the Sirmons Construction Company, and cost just $11,000 including lot. (Probably no air conditioning, though.)

Mailed in January 1955 to (again) New Jersey, the card's hand-written message sounds like it came straight from the Chamber of Commerce: "How grand to enjoy the warm sunshine. The beautiful fruit trees, loaded with fruit and the flowers. The layout of this house is tops, you would like it. Regards, Adam"

I'm guessing Abbott, the author of "The Postcard," had a personal connection to St. Petersburg. Maybe his own grandmother lived there, in a house like this one. He wrote with obvious affection for the city, even though he apparently lives in Connecticut himself.

Anyway, I think I'll buy "The Postcard" for my nieces. They might get a kick out of it.
Posted by Steve Reed at 7:07 AM