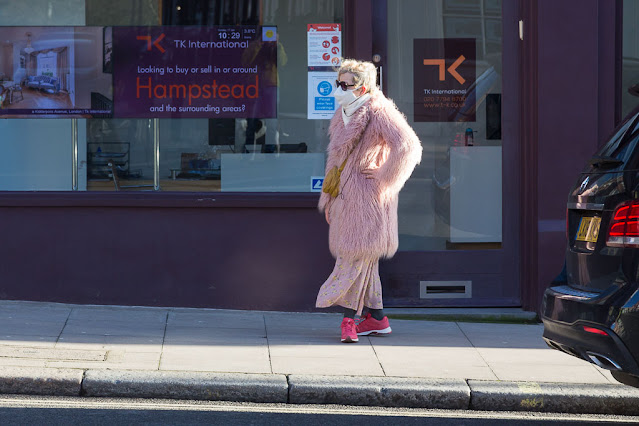 OK, back to our regularly scheduled programming (whatever that is) and away from political flights of fancy. Thanks for indulging my musings yesterday, and let me just say by way of celebration: TODAY WE GET A NEW PRESIDENT!!!! Wooo hooo!!!! (yes, I am shouting)

It's a shame school's not in session, because normally we'd put the inauguration up on the big TV in the library for everyone to watch. I remember when Trump was sworn in we did it, even though we were holding our noses. It would have been nice to have the same opportunity now.

I saw this woman (above) in her fetching pink outfit in Hampstead when I was walking Olga on Sunday. She's kind of striking a pose, isn't she? Very "Vogue" in her fuchsia trainers. At least she was wearing a mask.

Yesterday I worked in the garden. I cleared out the wildflower bed, cutting down whatever dry, dead stalks remained from last year, and removing the blackberries that seem to infest every corner. They're incredibly persistent -- I cut them down and they come right back up. We allow them in a few areas, so we can pick blackberries in season, and I trimmed out the dead stalks in those places too. (And got scratched up in the process.)

I also removed a lot of ivy from our side fence. It was quite bushy and although pretty, it was just getting out of hand. I felt bad because I know the birds like it -- I even found an old nest -- so I left some behind for the critters and did not denude the fence entirely.

Between this and the rose-pruning Dave did on Sunday, we have six bags of yard waste for collection on Friday. 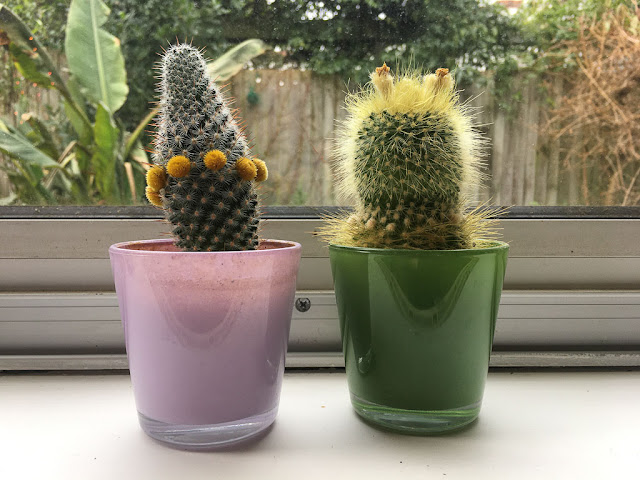 And then I worked on some indoor plants. We have these two cacti -- the one on the left was a recent rescue from the library, where it had been abandoned. See that ridiculous ring of false flowers around its middle? Poor thing! I bought some cactus potting mix and now they look like this: 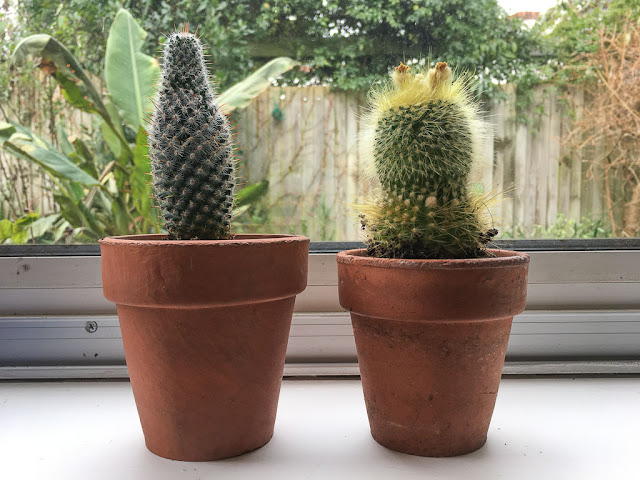 I also rescued a couple more orchids from school, where they'd been left on a common windowsill and were slowly perishing from neglect. We now have 14 orchids, which is a little ridiculous. Many of them are in the process of sending up flower stalks, so we should have lots of blossoms in a few weeks.

Today we're supposed to have some dramatic weather, with a 90 percent chance of rain and wind. Apparently this is related to Storm Christoph, though we're not getting the brunt of it here in London -- most of it is striking to the north. (Why does this storm have a French name? Haven't we Brexited?)

I'm working from home today (which basically means reading Newbery books) so I'll be staying inside.
Posted by Steve Reed at 7:50 AM