Tanya Roberts Is Not Dead 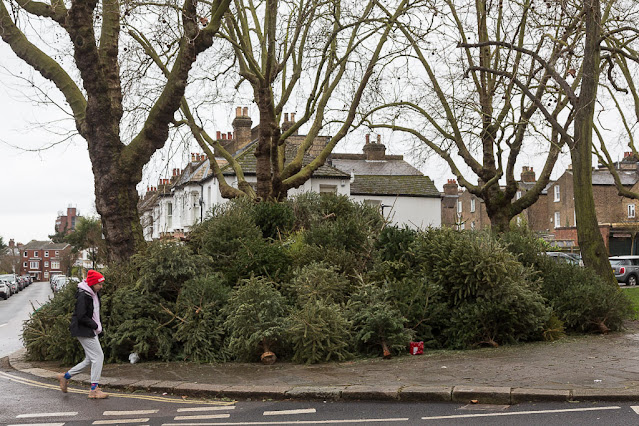 The Christmas tree recycling pile at Fortune Green has grown immense. Remember when I took a photo of it the other day and that older woman was sitting on the benches nearby? Well, it has now engulfed those benches, as well as the fountain and the tree enclosure itself. It is a hill o' trees. 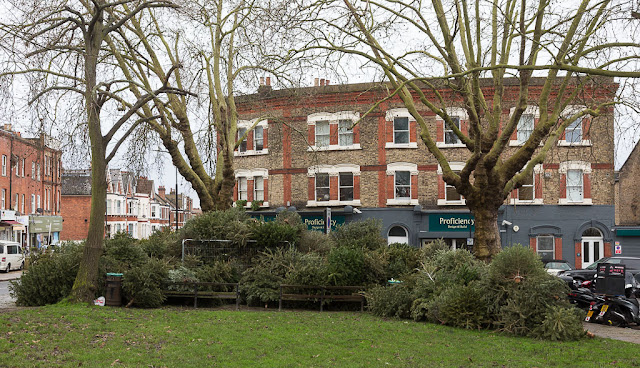 There's a lot of mulch to be made!

I've been debating whether to go through with the endoscopy I had scheduled for this week. My stomach problems -- which were so acute in early December -- have completely subsided, thanks to Nexium, and with the coronavirus running rampant I wasn't crazy about the idea of showing up in a medical clinic (or taking the tube down to Baker Street). I don't want to ignore any potentially serious health issues, but the doctors seem pretty confident that nothing terrible is going on -- and since my appointment was with a private clinic, I'd have had to pay for it. I wrestled with this for a while, and yesterday morning I finally called and cancelled. I'm sure I've made the right decision. If my symptoms return I'll readdress the situation.
And then, just hours later, the government seemed to confirm my instincts by putting us into an even tighter lockdown. We jokingly call it Tier 5 of our three-tiered system, because you have to use humor to deal with these sorts of things, right? Schools nationwide are now officially closed until mid-February and we're being told to stay home and only go out for essentials, like last spring.

Dave and I are still figuring out what this means for us practically in terms of work. I haven't heard from my boss yet about whether I'm supposed to show up Monday or not. There are things I could do in the library, especially if people are going to be returning books or checking out more books, and I think those are services we want to somehow continue to provide if possible. Dave will certainly be teaching remotely and, being somewhat more medically vulnerable because of his Crohn's, he has no plans to return to the school building anytime soon.

You probably saw the news that Dawn Wells, the actress who played Mary Ann on "Gilligan's Island," has died of Covid-19. She was practically my mother's age, but still, I was sorry to see her go. Like most Gen Xers, I grew up watching "Gilligan's Island" in afternoon reruns and I feel a special attachment to all those actors. They're so familiar to me, they're like relatives. Tina Louise, crazy old Aunt Ginger, is the last surviving member of the cast.

I was also sorry to see that Gerry Marsden, of Gerry and the Pacemakers, has died. "Ferry Cross the Mersey" and "Don't Let the Sun Catch You Crying" are two of my favorite '60s pop songs.

Tanya Roberts, however, is apparently not dead, contrary to recent media reports -- although it sounds like she is quite ill. What a bizarre story that is! Hopefully she will pull through her current medical crisis to roam the African veldt on her zebra once again.
Posted by Steve Reed at 7:00 AM