Gin, Chips and a Dirty Mystery 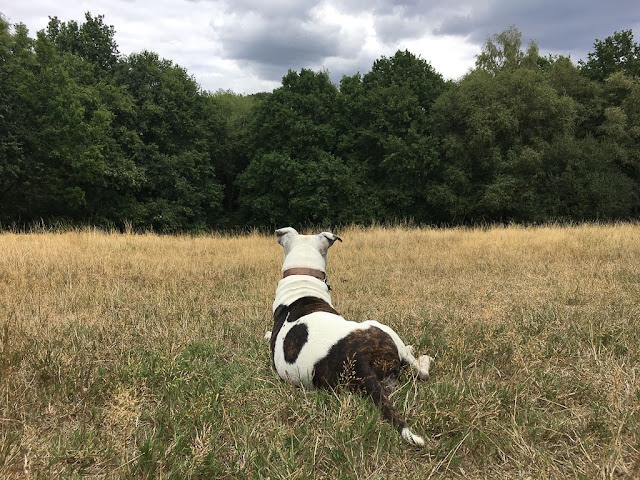 Olga surprised me on our walk yesterday morning by going after a young starling. She was sniffing around intently underneath a car parked on the street, and I figured a squirrel or cat was probably under there, but then she lunged and a small bird rolled out. I held her back as it wobbled to its feet and made a few flopping attempts to fly, and I was afraid she'd injured it. But then it seemed to come to its senses and fluttered up into a nearby tree. It may have PTSD but I think it will recover.

I spent the morning on minor household tasks. For example, I potted a buddleia that had sprouted in an inopportune place next to our front steps. If it survives we'll replant it in a better spot.

I also gathered up a mound of soil that appeared next to our fence some time in the spring. This is a weird story: We thought a fox raked it up while digging a hole, but even after the hole had been refilled there was a lot of surplus soil, and it wasn't of the clayey type that predominates in our garden. I think what actually happened, and I'm surprised it took me so long to realize this, is that Mrs. Kravitz (or one of her gardeners) dumped a bucketload of soil onto our side of the fence. I think it came out of her raised bed where her compost bin used to be, and the foxes then dug into it because they smelled food compost and/or rodents. Am I paranoid? Possibly.

Anyway, I scraped all that extra soil into a garden trug -- completely filled it! -- and put it in the shed. I have no idea what we'll do with it. Maybe when winter comes and everything dies back we can spread it elsewhere in the garden, more evenly.

Then I took Olga to Hampstead Heath. 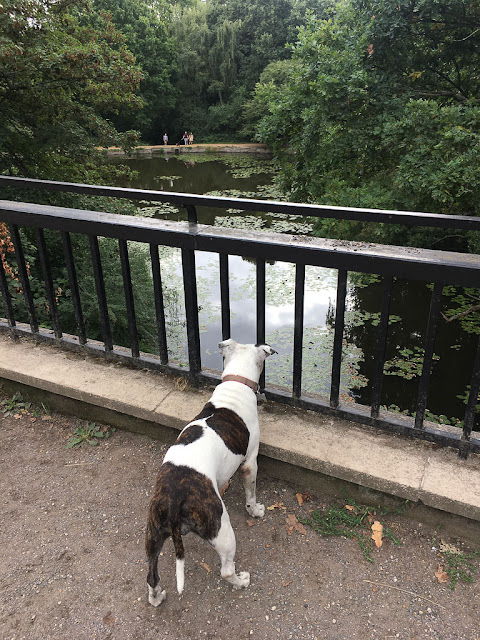 Exactly one year ago, I took her photo on the far shore of this same pond, with this bridge in the background. Here's the reverse view.

We had a good walk and she got a chance to splash around in the dog-swimming pond (which is not the pond above). Just a quick wade, really, but enough to get her belly wet, which she always likes. 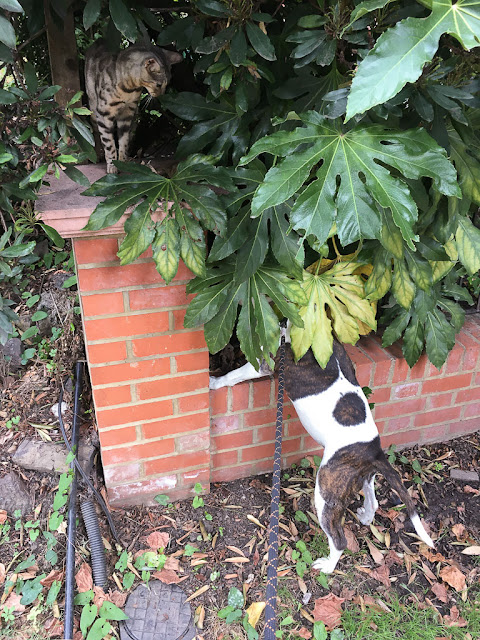 On the walk home, Olga dove into a shrub and I thought, "Oh no! More baby birds!" But then a cat emerged on top of that brick column, and stared at her defiantly (and disdainfully). I'm not sure Olga ever saw the cat. I think the leaves were in the way. 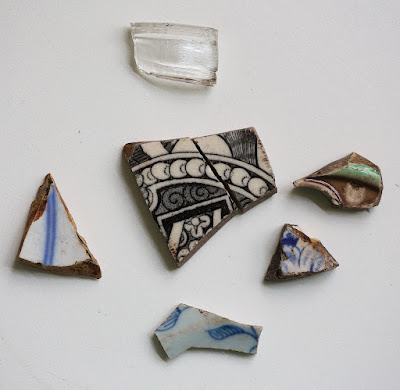 I found some interesting china chips on the Heath. It's been a long time since we've walked anywhere I've been able to find them, so that was a fun blast from the past. I love those black-and-white ones, which were right next to each other and obviously go together. They're pretty thick, so I think they're from a tile rather than a piece of dinnerware. 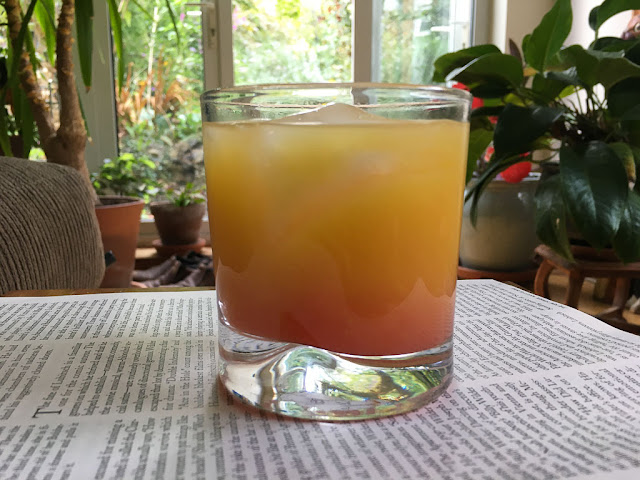 In the evening I made my Craft Gin Club cocktail, the name of which I forget but it includes orange juice, gin and a simple syrup. I added a bit of Campari because that also came in the Craft Gin Club box and the picture with the accompanying recipe seemed to suggest it (though the recipe never mentioned it). For once, I liked the cocktail of the month! 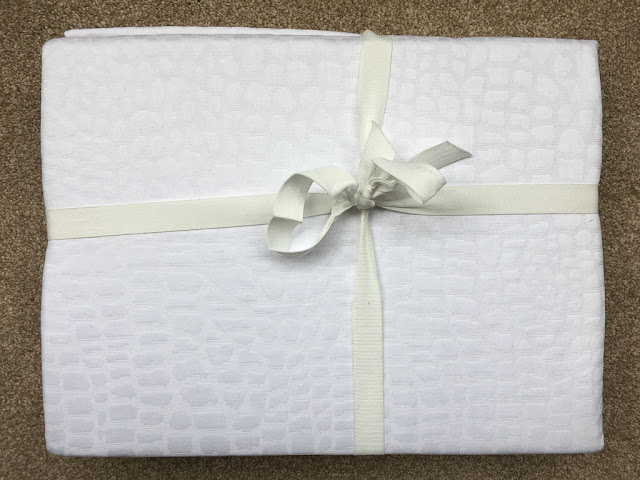 Finally, because you asked, this is what a Turkish summer blanket looks like. Ironically, the brand is "English Home." Go figure!
Posted by Steve Reed at 6:59 AM

Good idea to spread the trug contents on your garden, it will be nicely composted and ready to grow stuff.
Olga has rediscovered her youthfulness it seems.

Ok, I kind of know what a Turkish summer blanket is now, and the name is self descriptive.

Is Olga going through a movie star phase by not showing her face?

The black and white tile is very nice and looks quite old.

English Home Turkish Summer Blanket, made in Armenia, maybe. It’s very nice. The drink looks and sounds delicious and it appears that Olga was feeling her oats. Oh, I love the black and white shards.

I believe that the cocktail you describe is called a Russian Neckbreaker. The Turkish summer blanket looks divine. How have you lived without one thus far?

I got a "kick" out of the photo of the cat watching Olga dig under the plant. I wonder what Olga saw under there.

There's a real Wyeth "Christina's World" vibe to that top picture of Olga! Couldn't figure out at first why it felt so familiar.

That cat looks surprisingly like our dear departed MaxGoldberg; he would have stood and stared at Olga too.

You're too nice to dump a mound of soil somewhere in Mrs K's garden.. Or balcony.. Climbing foxes,you know.

The image of cat watching Olga watching something is a keeper.

Hmmm...a mystery possibly solved.
Cats have a way of making us all look a bit silly, don't they?
Thanks for letting us know what a Turkish summer blanket looks like. We wonder no longer!

What the heck with the dirt - that was rude! But maybe it will come in handy in the future. Perhaps you'll finally throw off your nice guy ways & become a mudslinger!

I empathize with Olga as many times I come across a situation and feel like I just missed something important. If only I had looked around the leaves!

Thanks for the photo of the blanket. Will you use it?
Well, at least you can use the dirt that Mrs. K dumped in your yard. Strange, tho...

what a weird alligator pattern on that blanket. I must say I'm rather disappointed in the blanket. I expected something more...Turkish. And that cat looks like a Savannah or some kind of Bengal cross breed.

I love the cat and Olga photo. It is sweet and funny in every way.
When I look at those china chips you found I think of a dear friend who does beautiful mosaics. These could fit into a very fine piece of mosaic art.

I love that top photo of Olga in the field. Your cocktail looks and sounds very tasty. I had a mango margarita with my Mexican food last Saturday and that was very good too. That's also a great photo of Olga and the cat. You are so right, that cat is displaying a disdainful look.

I love all the photos of Olga, and your flowers. She really seems to enjoy your backyard very much. This is good. Enjoy your day, hugs, Edna B.

I love the picture of Olga and the cat - Olga might not have SEEN the cat but she SMELLED the cat! lol

A blanket is an interesting choice of gift for looking after the neighbours' plants. Did they have no idea of your interests, I wonder? lol again :) I like the black and white pottery bits. If we had such things here (which we don't) I would store all the bits in a fat glass vase/dish to display them. Because I have a thing for fat glass vase/dishes also. I'm pretty sure you've told us how you display them but I don't remember the details.

Olga could smell the cat but not see her. Loved the disdainful look of the cat; they are experts at that look. I get it sometimes from Mari! Although I don't like gin, that drink sounds refreshing.

Be glad Olga was only seeking out little birdies and contemptuous cats. Our Sammy went after a large black and white "kitty" one night a few weeks ago that turned out to be...yep, one large skunk. We are still living with the aftermath. Or should I say, the after-smell.

Favourite photo of the day was, Olga head in bush and cat on post, lovely.
Briony
x

I love all the Olga photos today, including the reverse photo from last year. Mitchell put it just like I would have ... she was feeling her oats! 😃 I was so focused on her, I might have missed the cat if you hadn't mentioned it. It's beautiful.

That is a pretty cat! I like the blanket, summer weight blankets are so nice for on the couch. Not that we'll be needing anything like that here until after Labor Day.

I love that photo of the cat watching Olga looking for the cat.

I love the pottery shards you found in the Heath. How interesting. And Mrs. Kravitz? She sounds like an eccentric piece of work (or her gardener is!)