Paparazzi in the Park 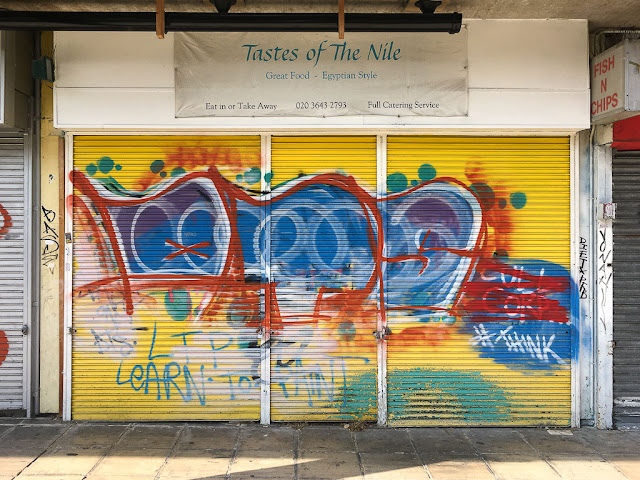 It's been an interesting several days around here. Although we had tons of rain the other day and the ground, for the most part, is still damp, we have a "hosepipe ban" kicking in on the 24th. That means no watering gardens or washing cars with garden hoses. We can still water, but we have to lug the water through the garden in a watering can. Supposedly this greatly reduces water use -- I assume a lot of people just let some of their plants go under those kinds of restrictions.

We've also had more transit strikes. The tube and trains were closed on Friday and I heard many services were down on Saturday as well. The fun never ends!

Despite all that, I managed to get some stuff done. I went to the dentist on Thursday for a second cleaning, at the hygienist's urging. She seems happy with my brushing now that I'm using her recommended electric toothbrush. I don't mind it so much now that I'm getting used to it, but it's still very...foamy.

Yesterday I did a bunch of laundry and then took the poor, neglected dog on a long walk to Hampstead Heath. 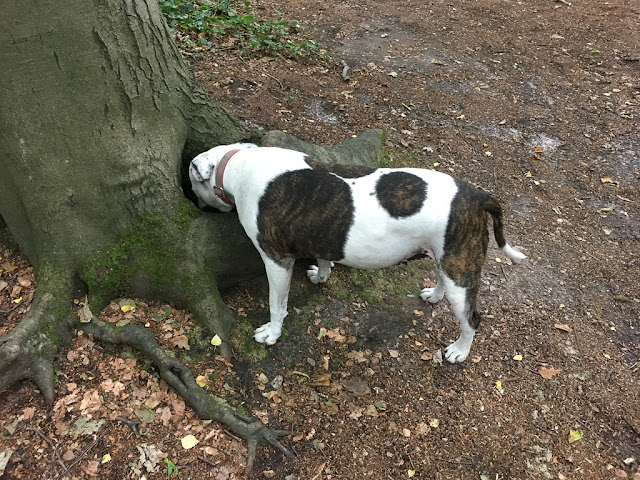 We hadn't been to the West Heath in ages, and Olga nibbled grass and barked at squirrels and even chased one or two (a less frequent event these days). She found rainwater accumulated in a natural cup at the base of this tree and stopped for a drink.

While walking through the woods we heard distant applause, and then what sounded like a bunch of people singing "I Want to Hold Your Hand" out loud. Was it a Beatles sing-along? I couldn't check it out because chasing it down with my slow-moving dog in tow seemed like too much of a task, but if Sir Paul was there and I missed it I'll be annoyed. 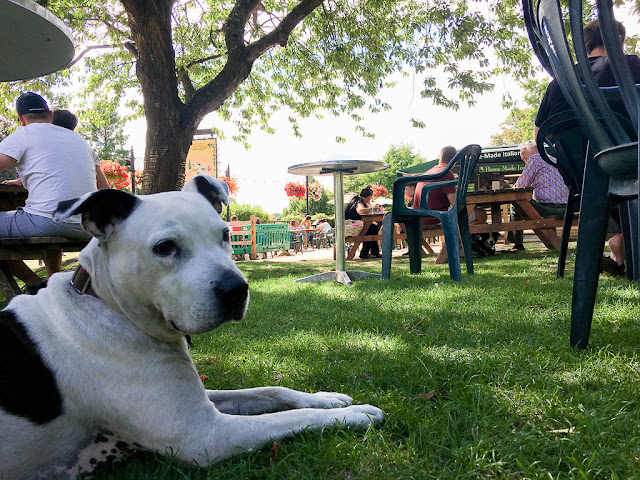 We went to the cafe at Golders Hill Park for a coffee and a rest. This is a good way to break up the walk, and it gives Miss Olga a chance to be fawned over by complete strangers. When I was in the cafe buying my coffee I looked out to see her surrounded by a gaggle of young women, all taking photos with their phones. I suppose she's on someone's Instagram now. 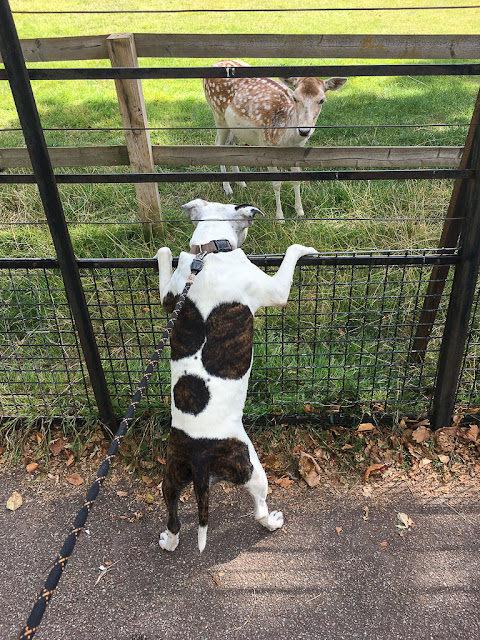 On the way back we walked through the stumpery, with its profusion of squirrels, and past the zoo and the deer enclosure, where Olga found herself face-to-face with a fairly nonchalant occupant. I don't think she's ever seen a deer so close. She probably wondered what the heck it was.

Last night we finally finished the excellent "Night Sky" on Amazon. I really liked it, and it came to a better resolution than I was expecting. When I heard it had been cancelled I was afraid it was going to end on a cliffhanger and it didn't, really, though there were openings for a second season if the producers so desired. We also finished Ewan MacGregor's "Obi-Wan Kenobi" on Disney+, and it was OK, but many of these new "Star Wars" shows seem really geared to kids. Earlier this week we finished the first season of "Only Murders in the Building," and now it's on to Season 2!

(Top photo: A shopfront on my walk home from work. It's colorful but kind of a mess. I'm not sure that place is even open.)
Posted by Steve Reed at 8:07 AM

I love the second photo of Olga and her markings are so well displayed in the last photo. If you have Disney+, can you see the series/movie about Fire Island?

Interesting day with some great photographs. I count using our 14-litre watering can as exercise.

If they were singing "I want To Hold Your Hand" they must have been posh people - perhaps a bunch of Tory MP's - because the rest of us sing "I Wanna Hold Your Hand" which, by the way, I don't!

I want to go for a walk with you and Olga. Today’s photos are wonderful. I'd fawn over her, too. I have a photo of my mother-in-law doing that same pose at a tree trunk. I always wanted to hug her, too.

Olga's face in that second to last picture seems to suggest she might be growing annoyed with her celebrity and the crowds that gather around her!

A most enjoyable walk with you and Olga. Sorry to hear about restrictions on watering...and glad there was that rain finally! Hope your plants survive. Sunflower open yet?

It is funny that the water restriction is starting now when the weather is getting cooler and people water less anyway, right?
Lovely photos of Olga! She is your Muse!

It looks like it was a great day for a long walk. It's good that Olga got to be fawned over. A girl needs a little attention from strangers every now and then. It's good for the soul.

Love the walk you took with Olga. She looks so happy to be out there. The fawn photo is wonderful.

Even as dry as it's been here there were never any water restrictions.

We finally got around to watching another episode of Night Sky. Don't know how many remain. I like it though Marc has a hard time following it. Maybe if we watched the episodes closer together. I'm glad to know it has a good conclusion. I think we have only one more episode of the 2nd season of 'Murders'.

Sometimes the people putting on water restrictions are behind the times. But once it's that dry if you don't get more rain it soon becomes dry again. Anyway , keep in mind that our average yearly precipitation is 14 in.

So Olga was fawned over then met a little deer and did her own fawning.

You don't seem very dependent on mass transit for work, just as well.

Fantastic photos of Olga! When our dogs drink from puddles or anything other than their water buckets, we refer to that as "wild water".

Did Banksy make them do that, see my post today Steve. lol
Briony
x

"the poor neglected dog" - lol. We can all tell how true that is :) What great pictures of Olga, and you're right, she is undoubtedly splashed across the internet by those girls today. Sounds like a fair bit of upheaval over there. Transit strikes can really mess up a city.

Olga and the deer might be my new favorite photo of her. You can see her markings clearly and it's just to adorable!

I think they will have to enact similar measures if they are going to save the American West.

I need to read up on the transit strikes. For them to happen so often is just unimaginable here in the States.

I love Olga and the deer. Her leaning up against the fence is adorable.

It sounds like a great day. And I have to say -- Olga just cracks me up! The drinking pic, the deer. I love her!

Wonderful photos of Olga--I would fawn over her too! In spite of the watering and transit issues, it sounds like it was an excellent day out and about. (oot and aboot as my Scottish grandfather used to say)

Andrew: There are a couple of movies about Fire Island that have turned up on our streaming services, one a documentary and one not. I can't remember whether either of them are on Disney+. We're planning to watch them at some point.

Tasker: Absolutely! 14 liters is a lot of water. We have a 10-liter can and that's heavy enough!

YP: You might sing "wanna," but the song is titled "want to."

Mitchell: You have a photo of your mother-in-law on her hands and knees next to a tree? What?!

Bob: Olga has never liked it when I take her picture. I think she doesn't understand it and it annoys her. Sometimes she barks at me to get me to stop!

Barbara: Sunflower report in today's post! That rain changed everything. The grass has come back green and all the plants have been recharged.

Ms. Moon: People have suggested that and I've considered it, but I just don't think I can take on managing more social media!

Ellen D: I guess the reservoirs and water supplies are all still so low that they've felt the need to take action.

Sharon: She definitely got lots of attention, but she was focused on the door of the cafe waiting for me to come out!

Ellen: We watched them mostly daily, though we stopped while we were in Michigan. I didn't find it too hard to follow, but you have to suspend disbelief in places. Maybe that's what Marc has a hard time with!

Red: Exactly -- even though it's rained a few times we're still WAY down in our usual rainfall totals.

Boud: You got my subtle pun! Fortunately, we can walk to work from where we live. It makes a huge difference.

Kelly: I like that expression! Olga seems to prefer "wild water." I imagine it does have more flavor!

Briony: Ha! I don't think Banksy would claim that door.

Jenny-O: It has been a rather tumultuous summer. I think it's all Brexit fallout, though some people are loath to admit it.

Bug: That pose does show off her spots, doesn't it?

Ed: We had a couple of subway strikes in New York when I lived there, but never with this kind of frequency. Yes, the West is in trouble when it comes to water.

Allison: I like how she's stuck her head through the fence. She'd have climbed over if she could.

Jeanie: She has a lot of personality. Sometimes too much! LOL

Margaret: It WAS an excellent day. I'm always happy when I can get Olga girl back to the Heath.

The Beatles sing-a-long might have been to celebrate a birthday. Didn't Paul McCartney recently turn 80?