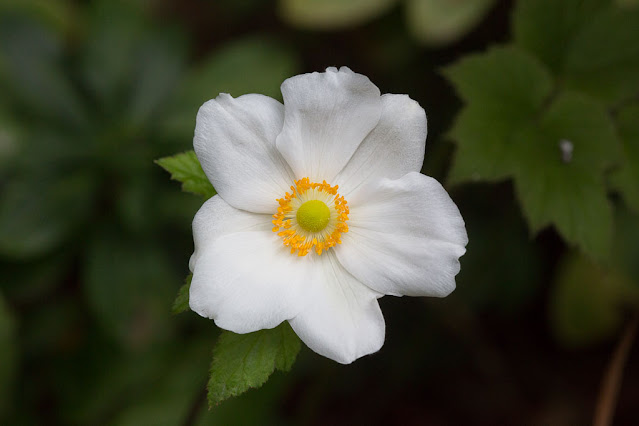 I basically did a whole lot of nothing yesterday -- just sat out on the garden bench reading Tana French's mystery novel "The Wych Elm," which I am liking so far. (I'm about halfway through.) It was a good way to spend the last day before our first full week of school. Dave and I are both working as of today, so now summer really IS over. And the Japanese anemones, which always bloom just as we return to school, are right on time. 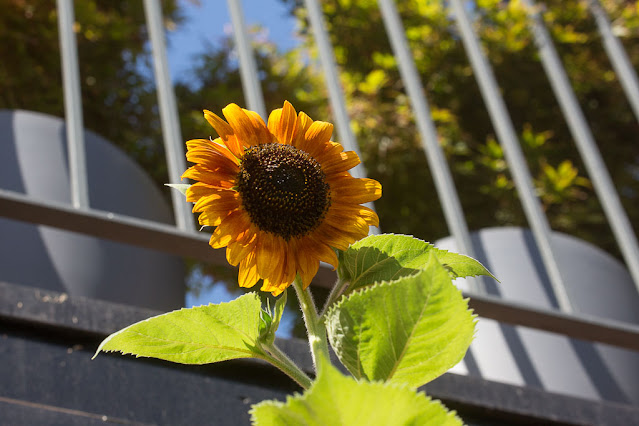 Someone asked how our sunflower is doing. Here's what it looks like. It's hard to photograph, being so tall and yet in a relatively narrow part of the patio at the side of the house. I kind of have to shoot straight up. You can see the Russians' plants in the background, the ones on their terrace that I had to maintain.

Funnily enough, there's also a sunflower growing in one of those pots. A bird must have dropped a seed. I told Mrs. Russia about it via e-mail so she won't be tempted to pull it up when she gets back in four or five days. It's not as far along as ours but if she leaves it alone they'll have a nice flower.

Anyway, I planted several sunflower seeds in our garden in late spring but the others never grew much -- they're still tiny and spindly. I'm glad at least one of them got to blooming size. 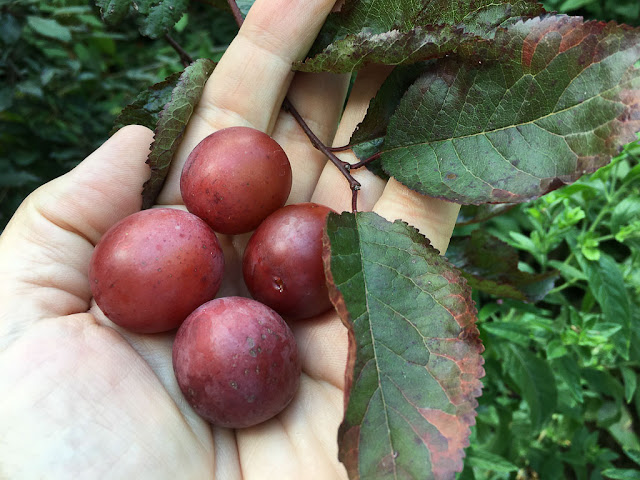 Finally, here's a garden surprise. Remember that mysterious tree we relocated a couple of years ago? It was a baby sprig when I found it in a discarded pot and planted it in the garden, and then we moved it when we realized it was going to get much bigger. Well, now it IS much bigger -- probably 12 feet tall or so -- and this year it produced fruit! We knew it was a Prunus (plum tree) of some kind, but I thought it was purely ornamental, so the appearance of several miniature plums the size of ping-pong balls was a bonus. They taste really good, too!
Posted by Steve Reed at 6:06 AM

Time to stop blogging and get off to work. Have a nice day! I'll be going back to bed in a few minutes.

They're about the same size as the plums on my trees, except I never get any of them, the birds get them in that "just before ripe" stage.

Our sunflowers are well behind...in height and flower!!

Plums! That's such a nice surprise!

Thank you for insights to your life in England. I enjoy the pictures you post of your Garden (of which every English person seems to have) and the other finds you post. :-)

Your tendency to rescue plants has paid off with a nice surprise!

Have you seen the long list of book Florida has banned in it's schools and libraries? I think just school libraries. Also I read that they school libraries are supposed to send a notice to parents when their child checks out a book.

Love the sunflower and the plums (Yum!). I have to remember to plant sunflower seeds. We walk around the neighborhood admiring those tall beauties.

All your hard work pays off! Well done, Steve.
Have a terrific school year!

Never hear "funnily" hear. The only time I heard it is from a Haitian prof I had. I like the word.

The plums are a reward for your plant rescues. They look great.

We used to have a neighbor that had lots of sunflowers growing wild in his field. Every year we would have to walk our field on the other side of the fence to cut all the wild sunflowers pooped out by birds so they wouldn't damage our combine head. Birds are very efficient distributors of sunflowers.

It's nice to know that the garden is right on time with the blooming process. With our changes in weather patterns, I've wondered how it will affect certain plants. Those plums look great. Enjoy!

Our sunflowers get attacked by the birds once they begin to get tall. Never reach their full glory.

Loved the photo (yesterday) of Olga greeting the deer. Our dog Sammy encounters them on (leashed) walks our neighborhood and/or backyard. They aren't all that shy, so we just tell him to leave the "big doggies" alone.

How cool to have your tree turn out to be a producing plum tree! That's rather thrilling!

Are you ever afraid you'll call Mrs. Russia that to her face by accident? Or maybe they don't mind being referred to as "the Russians".

Yay, love the sunflower. They are such hardy plants, if there's enough sun and nutrient. Wow, you are a farmer now, growing your own plums!

Ooh, plums! I've always thought I would like Tana French but I tried one of her books and it was a DNF. Maybe I should give her another shot.

It seems the wasps haven't found the plums. They look perfect.

Well those plums look lovely! Yum! And sunflowers are one of my favorites - such bright cheerful flowers. When we grew them it was always a victory if one finally made it because the squirrels LOVED them.

Nothing like plums straight from the tree.
Briony
x

Good luck going back to school. It is always hard for me to get into the routine the first week, then it becomes old hat. Love the plum picture!

I believe our neighbor across the street has a plum tree. It's quite tall and he harvested at least a couple of big buckets of fruit from it last year.

YP: I'm actually quite happy to be back to work again, believe it or not.

River: I'm surprised the birds didn't eat these, honestly. I think they got some of them.

GZ: Most things seem to be ahead this year, but I agree -- our sunflower was behind, too.

Bob: That is true. It's a reciprocal arrangement.

Ms Moon: It really was! I had no idea this tree would create any edible fruit.

Dov: Thanks for the kind words! England is usually an ideal country for gardening, though this year (hot & dry) is making everything a challenge.

Ellen: I have heard about some of those campaigns. They're being waged all over the country by coordinated groups of religious activists. It's up to us and our elected leaders to resist this kind of extremist BS.

Robin: The great thing about sunflowers is that they're pretty easy. Put a seed in the ground and they just grow!

Ellen D: It's always nice to see things through to blooming. I feel a sense of resolution!

Red: I don't know why people don't use it more! Maybe no one is finding things funny these days.

Boud: It was a terrific surprise!

Sharon: Some of our plants have been a little off-schedule this year, or have gone to seed earlier, probably because of the challenging growing conditions.

Mary: I wondered if Olga thought that deer was another dog! I imagine species can tell each other apart, though. Deer probably smell a lot different to a dog's sensitive nose.

Jenny-O: It really is! Completely unexpected.

Kelly: Ha! I know her real name, so I use that, but I don't suppose they'd mind being known merely as "The Russians." I bet they call us "The Americans." (Or maybe "The Gays.")

Barbara: I am not really a food crop person, but this is a nice surprise!

Margaret: Do you remember which one it was? I found one of them in particular a struggle.

Tasker: Yeah, no wasps that I could find!

Bug: I'm surprised we haven't had squirrels on this one. It's staked but I noticed it's slightly bent over -- maybe that's why?!

Briony: SO much better than Waitrose!

Michael: There's a lot to do right at the beginning to get ready.

Padre: Glad you liked them! I always think of you and a few other Olga fans when I post pictures of her. :)

Catalyst: Well, we're nowhere near harvesting buckets. I was happy to get a handful! Might just be a matter of time, though!

There was a movie or cartoon where someone liked to say gloriosity. I can’t remember more than that, but the non-word just came to mind.

The mature sunflowers have a tough stalk that can break or dull the teeth on the sickle bar that cuts the soybeans stems. When that happens the combine ends up missing beans in those areas and yields are reduced.