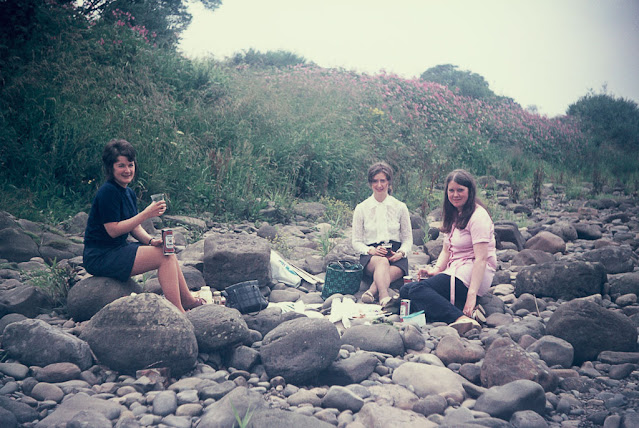 Here's the second installment of my rescued slides.

This first image has no date. I'd guess early to mid-'70s? The women are drinking cans of Younger's Tartan Special Ale, which is from Edinburgh. Maybe that's a clue about the location -- which doesn't look very comfortable, by the way. 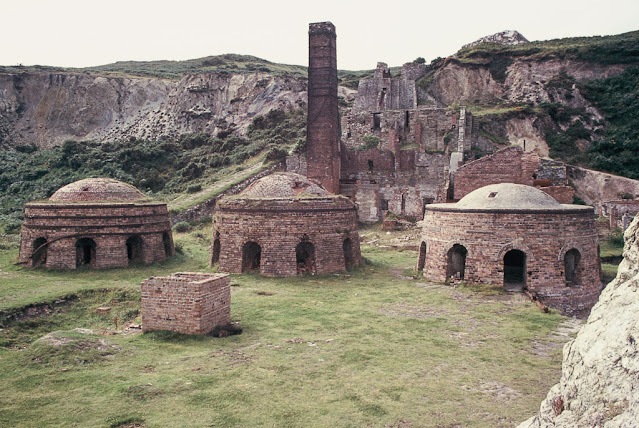 October 1985 -- I did a reverse image search on this photo and learned it's the old Porth Wen Brickworks on Anglesey in Wales. 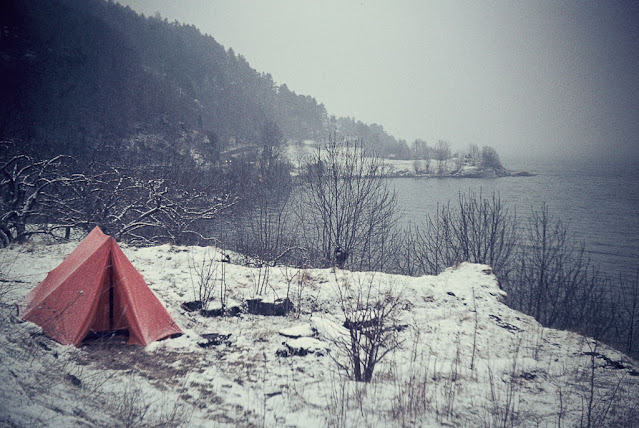 October 1969 -- This is recognizable right away as Windsor Castle. It didn't look a whole lot different the last time I was there. (Granted, even that was quite a while ago -- back in 2003!) 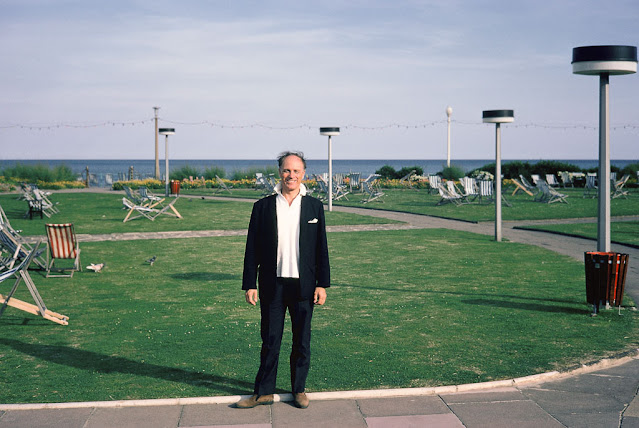 October 1969 -- This guy has a kind of Peter Lawford, brat-pack vibe. He looks like he's off to have another martini and play golf. 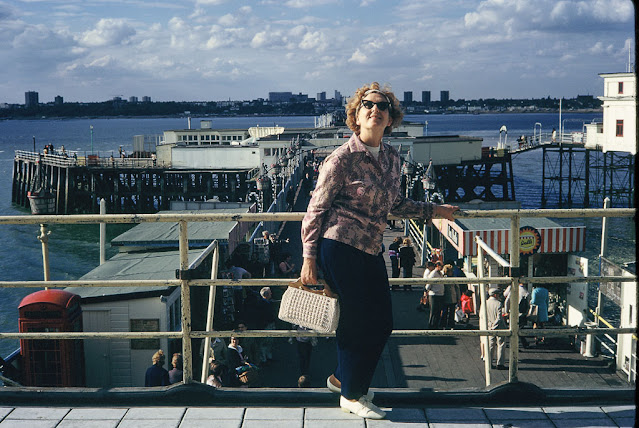 October 1972 -- Here's our mystery woman again, striking a pose in her cat-eye sunglasses. This was taken somewhere in Britain, given the red phone box at lower left, but I have no idea where. 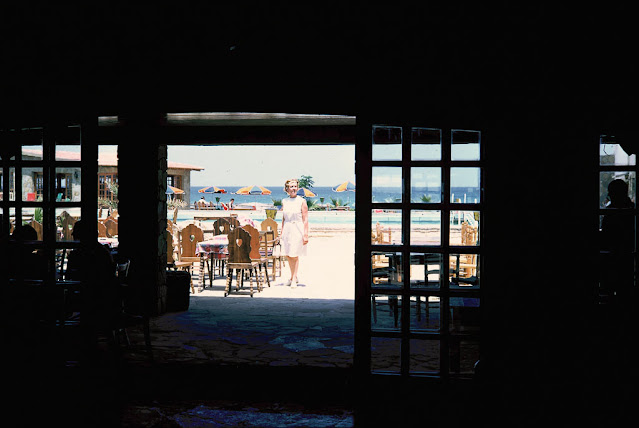 June 1972 -- And here she is again! This was a pretty creative way to take this photo, leaving the indoors in silhouette. For some reason, I think this was taken in Cyprus. Maybe there was a note on one of the slides or slide boxes, I can't remember now. 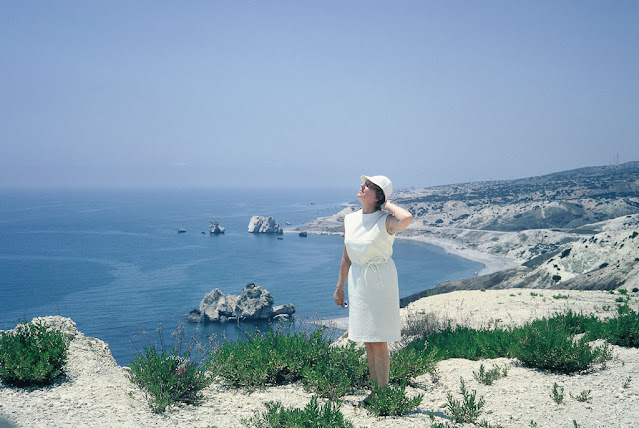 June 1972 -- Another photo from the same trip, and perhaps my favorite one of all. She seems so relaxed, really basking in that Mediterranean warmth.

My plan is to put all the scanned slides on Flickr. When I do I'll link to the set in case you'd like to see the rest.
Posted by Steve Reed at 8:11 AM

Mystery Woman's poses are so arty.

I wonder who took the pictures of Glamour Puss The Mystery Woman. Probably her husband. I wonder if he was the Peter Lawford character. So many intriguing questions that will never be answered. Sad to think that there are people out there in the world who would treasure those pictures of Glamour Puss now that they are no longer just colour slides.

I'm really hoping someone shows up to identify the mystery posing woman. And to locate the miserable winter camping scene and the rocky picnic. These are great fun to see.

I like the Woman Who Poses Around The World collection, but the one of the Porth Wen Brickworks looks like a movie set of some alien settlement on a distant planet.

My mind runs rampant in the morning.

Yes, Posing Woman must be the wife of the photographer. I would think, anyway.
I doubt I've ever seen three women drinking beer look more out of place and uncomfortable.

That red tent in the snow scene make a nice picture I think but I'm glad I wan't camping in it. I like the brickworks too.

so many questions! So few answers! This makes your slide project so interesting.

I love the way that unknown woman poses for photos. She is very used to having her picture taken.

It's so interesting to see that unknown woman posing in so many places on her travels. Someone loved her very much.

Have you noticed that Mystery Woman is almost always looking up in the photos, regardless of the location of her photographer? Perhaps she was perpetually optimistic. See, writing story lines about her already.

It would be interesting to find out more about the people in the slides. They seemed to travel quite a bit and looked happy in the pictures! My mom dumped all their old slides and I was quite frustrated with her. Back in my childhood days slides were what people took because they were cheaper to develop.

Her woven straw handbag, much like my Mom's , stiff and hard and painted with enamel like white paint. her "relaxed" look in the sunshine , looks as relaxed as one can be holding that pose, stomach sucked in, neck bent holding hat on...I love these old photos! Inspiring.I would love to see all of them on Flickr.

Did people actually pop their collars like that in 1969 or do you think it was the result of the wind? That tent in the snow is roughing it a bit TOO much for me! Yes, it looks miserable!

It would be so very cool if some recognized these people.

Windsor Castle? That whole building from left right across to that tree is one building? who needs that much space? (you could open half of that to house people and still have plenty of room left.)
I do wonder what is in all those rooms though, and how often are they used?
It's a lovely building, nicely constructed.

Mitchell: Aren't they? She seems to have a sense of what positions will look interesting in a photo.

YP: I suspected the same thing about Peter Lawford. I have some other pictures featuring a man but I'm not sure they're the same man, so I'm not sure who the husband/photographer was.

Boud: It would be really interesting!

Briony: I'm glad! A blast from the past!

Bob: It does look kind of "Star Wars"-ish.

Ms Moon: And yet they look pretty cheerful! I suppose enough Tartan Ale does that to a person.

Ellen: Yeah, the tent is a good picture but NO WAY would I want to be sleeping in it. I wonder if anyone did. It looks empty -- no sleeping bag or anything.

Red: It's all conjecture at this point, isn't it?

Sharon: My guess is the husband did a lot of photography and she was accustomed to being the subject.

Mary: Yes! I really think she and/or the photographer read some how-to tips about posing for interesting photos, and one of the tips was, "Look upward and smile"!

Margaret: So many people just throw them away now, which I don't understand.

Linda Sue: I remember handbags like that, with those wooden handles. They can't have been very comfortable to carry. I'll let you know when I get the pictures posted.

Kelly: That's a good question. The whole collar is up -- not just part of it or one side, so that seems more deliberate, doesn't it?

John: The photographer(s) get the credit, not me!

Debby: We'll see if anyone surfaces! Honestly it would be a miracle if they found them, at least until Google initiates some kind of facial-recognition search function.

River: Windsor Castle is QUITE large. You can Google aerial shots. I imagine only small parts of it are residential. I toured it and could probably have told you all that goes on there at some point but now I don't remember.

River: A family member lived in a flat in Windsor Castle for a while, pretty close to where that shot was taken. They were employed by a charity or project or something set up by one of the Royals, so not directly looking after the Royal Family and definitely not posh. It was quite cool to visit them and get to go walking through some of the behind the scenes of the castle. I'm guessing a lot of the windows are boring offices. The level of privilege and wealth the Royal Family has is utterly ridiculous though.