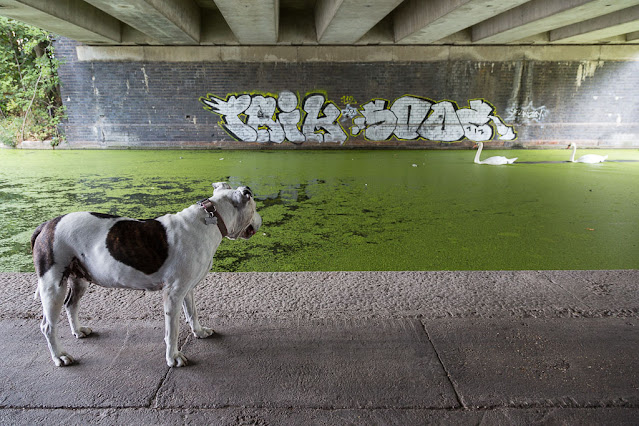 Olga and I were yearning for a change of pace so we went back to Wormwood Scrubs for our walk yesterday. We hadn't been there in almost a year! It's a long walk -- given her age, probably too long -- but she did fine. She chose the speed and we plodded along, one foot in front of the others.

As usual, we walked along the Grand Union Canal first. Olga was intrigued by these swans, who had two cygnets in tow (just out of the frame). I was nervous enough to tell her "No!" even though she's not likely to plunge into the water and go after them. Even in her youth she never did that. But a swan can mess you up, so I'm cautious around them. 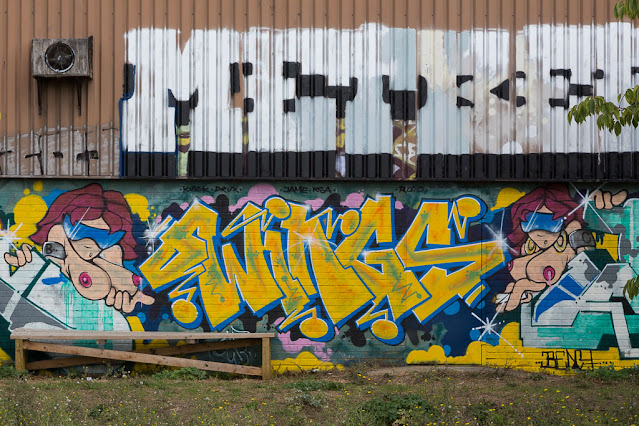 We found some rather provocative graffiti. I'm deducing that the artist, although capable of rendering some cartoonish semblance of a human breast, hasn't yet figured out how to paint eyes. 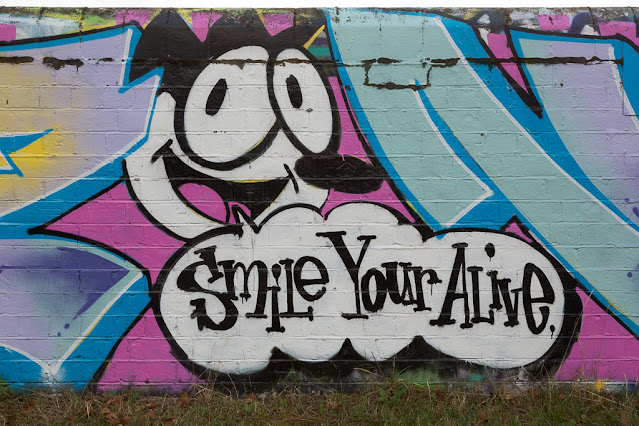 Never mind the grammar. It's a nice sentiment. 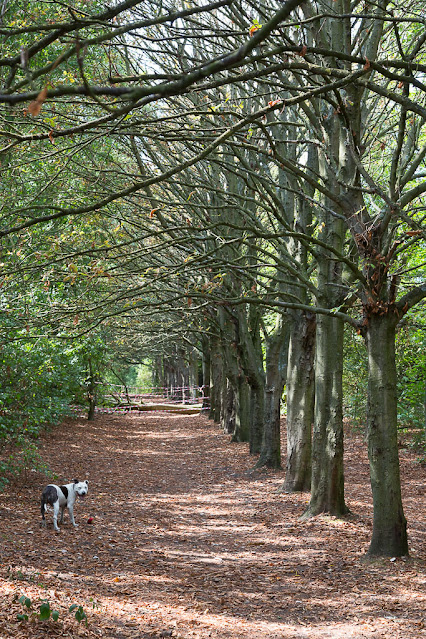 Turning off the canal, we walked to the entrance of the Scrubs. Wormwood Scrubs is known to many as a prison, and there is indeed a prison adjacent to the park that bears the same name. It's also next to the Old Oak Common rail yards, which have undergone vast expansion in recent years as part of the HS2 project to improve rail access to northern England.

You may remember part of the Scrubs was torn up for some utility work related to that rail yard expansion, and that project is still going on. A chunk of the area where we used to walk is still walled off and filled with construction equipment.

But there are several woodsy copses and some remaining forest, good for walking and squirrel-chasing. (Or squirrel-barking, really. There's less chasing going on these days.) 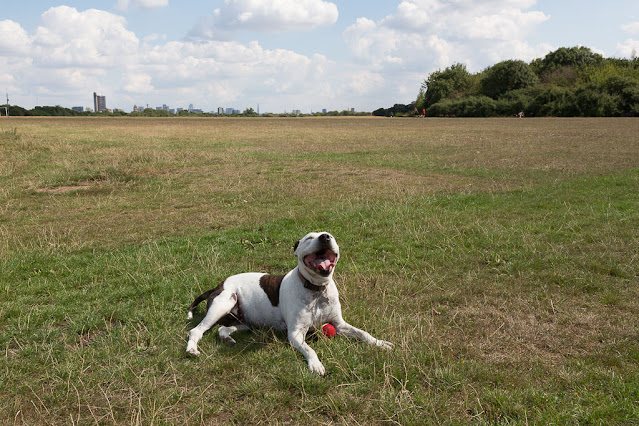 And the big grassy expanse of the Scrubs playing fields is still ideal for stretching out and relaxing. 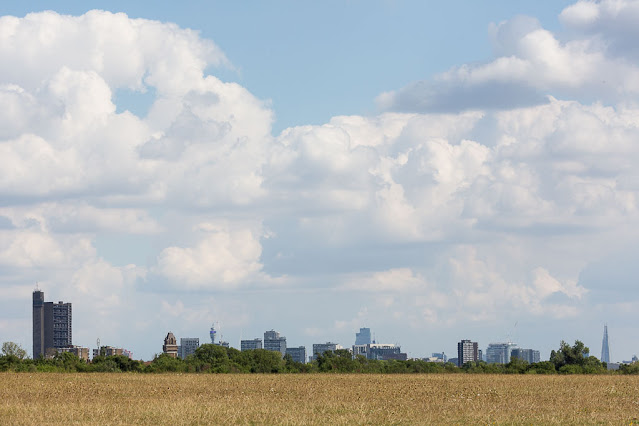 Here's the view from where we lay: From left to right, prominent buildings include Trellick Tower; the St. Charles Hospital in North Kensington; the BT (or Post Office) Tower in Fitzrovia; some residential buildings in Westbourne Green and, beyond that, Centre Point near Tottenham Court Road; 22 Bishopsgate, a huge new building way off in the City;  the tippy-top of the "Walkie-Talkie," or Fenchurch Building; several more nondescript structures; and finally, The Shard.


Olga seized the opportunity to roll in the grass on such a perfect summer day. (That brown building behind her is a new medical research building at Hammersmith Hospital, which is right next to the prison.)

Anyway, it was a good walk -- or "trudge," really -- but it's hard not to feel a bit bittersweet about it. I strongly suspect it's the last time we'll go to Wormwood Scrubs. It's a pretty arduous outing for a canine lady of advanced age. She's still in bed as I write this!

Lovely video. It looks like Olga was massaging her back with the ball.

A London friend, an older woman, felt quite uncomfortable when she walked through Wormwood Scrubs park and streets, mainly because of the people she encountered.

Olga looks grand as she rolls on her back. She was just interested in the swimming birds, no more.

Olga has enjoyed a happy life with you and Dave and you have always treated her with love, respect and kindness. For this you deserve a huge pat on the back. However, I guess that Olga has given you a lot in return. A perfect companion.

I think you'll always be glad you did this walk.

What a lovely walk you and Olga had there. She is so roll-around cute in the video.

One has to keep on challenging until the challenge presents physical problems. So Olga, keep on going.

If there is one thing that blogs are good for, it is that one day we will be able to look back and see ourselves and our children and grandchildren and pets as younger. What our lives looked like then. You will be so glad to have these memories of Olga and your walks together. She is such a lovely dog and I am glad that she is still able to get out and around like she does.

I sometimes struggle to read graffiti when it's too "artistic", but unfortunately "smile your alive" is very clearly written. 🙄

What a lovely way to spend the day, for you AND Olga!

Olga won the dog lottery when you took her home. I love that crazy grin when she's rolling in the grass.

Ambitious walk! Glad you did not have to carry her. Grand dad used to put a tennis ball or two in a sock and wear it around his neck for a quick massage, seems that is what
Olga has discovered. Lovely girl, freckled tummy.
Identifying the buildings is helpful, getting bearing on where you are, I have never been there and likely won'[t , since everything has changed so radically , covid, Brexit, climate. Thanks for the video, the pooch is a delight.

Loving Olga's doggy smile. And the way she handles her own physical therapy by rolling her tennis ball in all the right places.

Olga is so darn cute, and happy. I'm glad she got this chance to go to Wormwood Scrubs.

So much open land! What a treasure.
And Olga's contentment just shines!

I looked that up on a map to see how far it was from where you live. That was a very long walk. I enjoyed that little video of Olga. She looks like she's enjoying herself. I like that shot of all the buildings on the horizon. You can see quite a ways from there.

It might be arduous for her but she is definitely smiling!

I'm always thankful that pets live in the moment and do not have the worries we humans have about their future. For Olga, that outing would be pure gold. I'm glad you both got to go. Thanks for posting the video.

I have to say, I smiled at the unexpected (but truly correct) "s" on "other" when you said you put one foot in front of the others :)

What a gorgeous day! Love the view of the city from where you were, with all those fluffy clouds.

We took a too long walk with our old boxer one day and she finally laid down and would not budge. Marc had to go back to the house and get the car so we could get her home. And yeah Olga does always look happy.

River: She loves to roll on top of her toys. I don't know if it's massage or just a way to keep track of where it is.

Andrew: Really? I've never found it an intimidating area. Although the prison is there, it's not like you encounter prisoners when you're out walking around. They're all behind high walls. You can't even see them.

YP: It's definitely a two-way relationship!

Bob: I call that her "Totoro" face because she looks just like the anime monster in Miyazaki's film.

Boud: I think so!

Robin: She loves to roll. She's always been crazy about doing that when we pause on our walks.

Red: That's true! I feel like I should keep taking her on long-ish walks as long as she can do it.

Ms Moon: Absolutely. I love creating this record of our days.

Kelly: Ha! Yeah, no ambiguity there, for better or worse!

Allison: She's such a goofball when it comes to rolling. She loves it so much.

Linda Sue: I don't think I COULD carry her, even if I wanted to. She weighs about 45 pounds. I'd have to call an Uber!

Mary: I like how she tries to bite it as she's rolling on top of it. I think it's all a game in her mind.

Colette: I'm glad too, and who knows? Maybe we will go again.

Marty: It is a nice big open space. A lot of football (soccer) and even some baseball teams use those fields, especially on Saturdays.

Sharon: Oh, we didn't walk all the way TO the Scrubs from West Hampstead. That would be way too much for her. We took the train to Willesden Junction and walked from there.

Margaret: I think she definitely enjoyed it!

Jenny-O: I'm glad you caught that! I wondered if people might think it was a simple typo. :)

Bug: It was an exceptional day!

John: She's a very smiley dog, and she's always up for adventure.

Ellen: Dave and I had the same experience with our old boxers, Ernie and Ruby. We took them to a state park in New Jersey on a hot day and they laid down in the shade and wouldn't move. I began to really worry how we would get out of there, but they finally got going again!

A frame of the video with Olga and the building could be called “Olga’s World.” I love the photo of her with the big smile on her face.

Olga always looks so darned happy, she just makes me smile! I liked the Felix the Cat mural (grammar notwithstanding!)