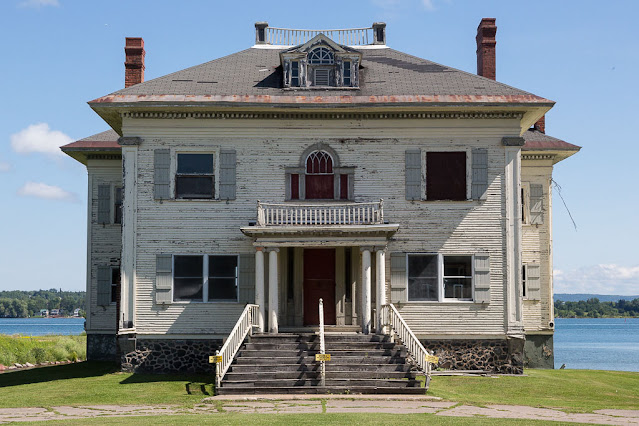 Yesterday we made a trip from Mackinaw City up to Sault Ste. Marie, on the northern edge of the Upper Peninsula, next to Canada. We thought we'd check out the Soo Locks, the engineering marvel that allows shipping between Lake Superior and Lake Huron (and the rest of the St. Lawrence Seaway).

Sault Ste. Marie is about 50 miles north of Mackinaw City. We got there and headed straight for the tour boat docks, next to this big rambling mansion. This house seems like it must have some historical significance. 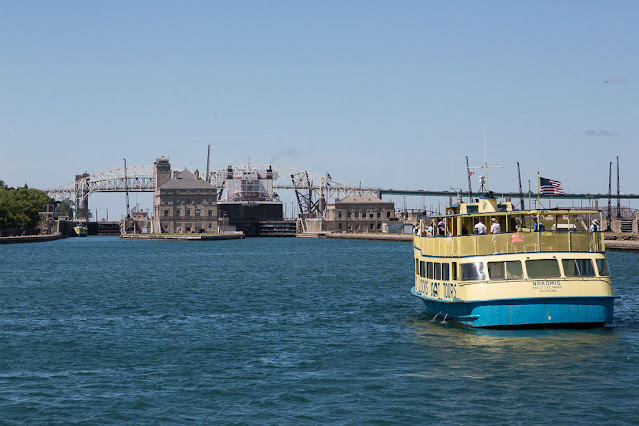 Once aboard our boat, we started our tour by crossing the river and cruising along the shore of Sault Ste. Marie, Ontario, which is a much larger city than its Michigan counterpart. We then lingered near the locks with other similar tour boats (above) until we could enter the first lock at left, named after General Douglas MacArthur. (Multiple small boats can use a single lock simultaneously.)

In the second lock from the left, above, you can see a freighter called the American Integrity going through. 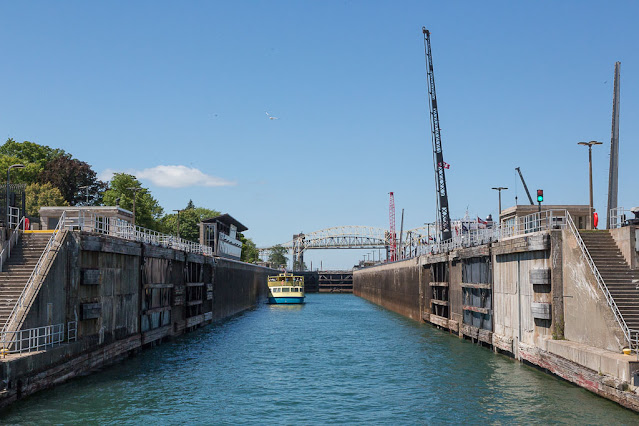 The locks look like this. There are four of them, varying in size.

Boats going upriver to Lake Superior enter and tie up to the support walls... 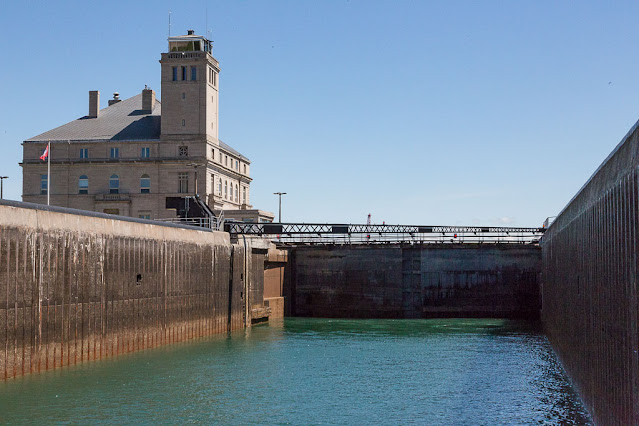 ...the massive metal gates close behind them... 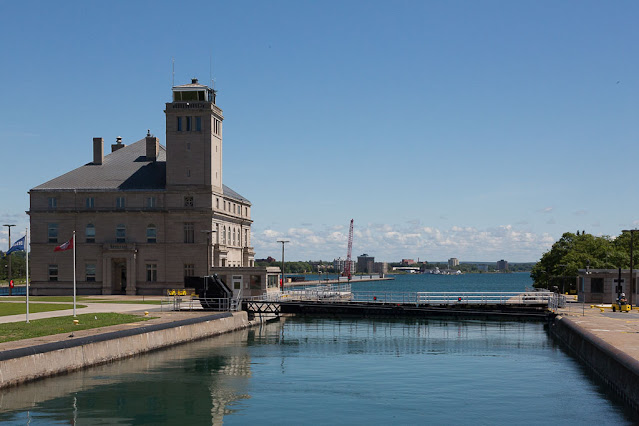 ...and about 10 million gallons of water flow into the lock, lifting the boat 21 feet until it's level with Lake Superior. The doors at the other end of the lock then open and the vessel continues on its way.

The same thing happens in the opposite direction except that instead of adding water to lift the boat, the lock releases it to lower the boat to the level of the St. Mary's River and Lake Huron. All the filling and emptying of the locks is done by gravity; there's no pumping necessary. It takes 16 minutes to fill the lock and eight to empty it, because fewer channels are used for filling.

Before the locks were built, the river fell 21 feet through a series of rapids, some of which are still visible. Boats and/or cargo were carried overland to get around the rapids, a slow, laborious process. So you can see how the locks changed everything. 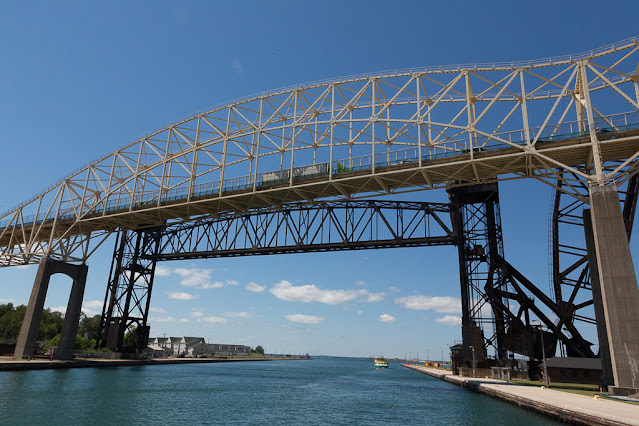 After we went through the locks, we went under the Sault Ste. Marie International Bridge, which carries traffic from Michigan into Ontario. From this angle you can barely tell, but there's a massive backup on the bridge. (The darker span in the background is a rail crossing.) 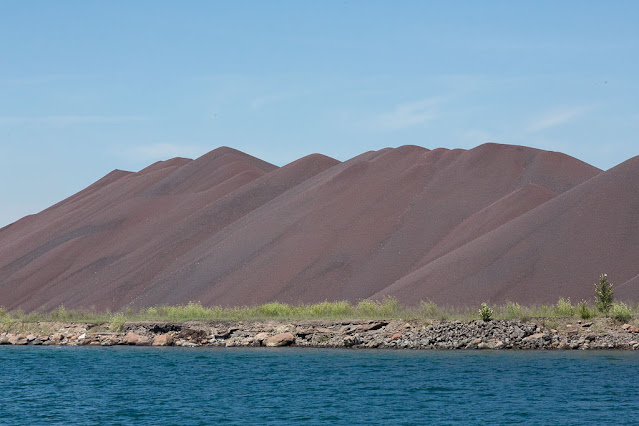 From there we cruised over to the north shore (still about 14 miles from Lake Superior proper). There are steelworks along the shoreline, including these piles of taconite iron pellets. 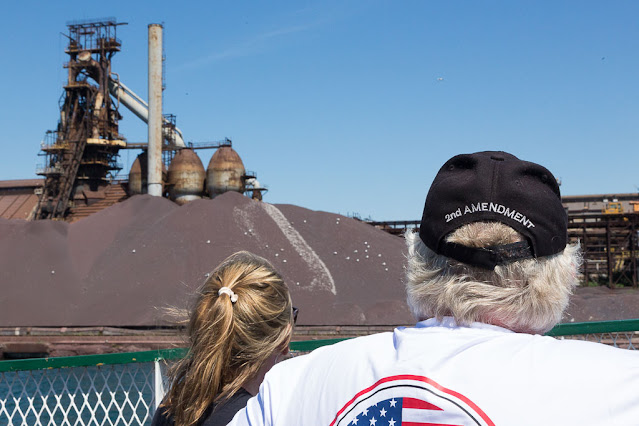 We had some interesting characters on our boat.

Finally we turned and went back through the locks and headed back to port. All told our tour took about three hours, but I found it very interesting. I liked it more than the farting horse tour on Mackinac Island.

We took a quick spin through town before heading back to Mackinaw City. I also got to travel (twice!) over the Mackinac Bridge. The first time I recorded the experience from the back seat...


...and the second time I drove it myself!

Today we're headed back down to the deer-hunting cabin owned by Dave's family. We'll spend one more night there before driving back to the Detroit area with his parents. Dave's sister went home before our Soo Locks trip, so she will no longer be able to provide us with an Internet "hotspot" -- which means I'll be offline until late Sunday. (Dave and I don't even have functioning cell phones at the deer-hunting cabin.)

Locks are quite fascinating. In spite of experiencing them on the Danube, I still have to carefully think about how they work. There is something about water levels that I don't quite get.

Your 'Three Hour Cruise' sounds great and you weren't stranded.

Back to the cabin to shoot deer sounds relaxing after your sailing adventure.

Aren't phone SIM cards very cheap in the US?

Interesting note: the U.P. did not get full phone service (landlines) until the early 1990s, maybe '92. I am sure that it will take a while for them to set up for cell reception. That is a remote area.

This was great to read. I vaguely remember learning about these locks at school, but I thought was one big one. Very interesting.
How will you cope with no internet access?? Horrors!

Really interesting pictures and I loved the video.

The Faded glory of that building..some connection with the locks?
Which are supreme engineering! And all gravity fed too.
That was a trip worth taking.

THanks for taking us along through the locks and back, over the bridge by video, and now into the desert of no wi-fi or cell service. Yes 1992 it is. I may have the same for my vacation in a week. Anxious a little.

I've been on (in?) much smaller locks but same theory. It's rather magical, isn't it? Hurray for engineers!
That house has my heart. Look at those straight old bones!

Good luck with the deer hunting Steve. I trust that you have got all the necessary hunting gear - including military fatigues. Will you be butchering the deer yourself? Thanks for taking us to that fascinating corner of America.

You explained it all so well and made it sound quite exciting! I can't believe you drove over the bridge! Good thing you remembered how to drive and what side of the road you should drive on!
Your vacation sounds really fun and makes me think I need to plan a trip to Northern Michigan!

A lovely journey there. Blue blue skies, nice views and a crazy guy with the 2nd Amendment hat.
Enjoy your day without the internet.

I love locks; there are some in Seattle (Ballard) that my family used to go to. Interesting characters indeed. It sounds like you're having some excellent adventures! Like Bill and Ted?

When I was a kid, watching boats and barges go through the locks on the Mississippi River was weekend entertainment. I enjoyed the drive over the bridge. Enjoy your internet-free days. I'm guessing it will feel a bit strange.

The very idea of locks, and the way they were, is amazing to me.

Ack! No internet! Locks are very cool. We used to enjoy walking around the Ballard locks and watching the various levels of competence demonstrated by the people tying off to the walls.

When I was growing up, we use to pass through a lock and dam on the Ouachita River while traveling by houseboat. They're pretty neat engineering feats. I love that house. It has my imagination running wild!

I'd forgotten how locks work, we learned about them in school, but that was a very long time ago for me. The mansion looks in need of a little TLC.

Loved your post about the locks. I've gone through about 8 of the 10 locks on the Rhine. The ship just fit (as all Rhine shipping must), meaning I could just put out my hand and touch the walls of the lock as we changed positions. Got some great up close photos of the walls and videos of the transitions. Will be going through 16 of the Danube locks in a few months. Locks really are remarkable.

Way back when we visited friends in upper state NY we went on a packet boat ride through one of the locks on the Erie canal.

This is Bill's wife Anne because I don't seem to be able to comment from my own account. I grew up in Sault Ste. Marie (born 1954) and we had a landline my entire childhood life. I have lived in Ann Arbor MI in adulthood but still own beach property west of the Sault. We have had great cell service here for many years and DSL wifi that allows me to work remotely. Also, I vaguely remember crossing the Mackinac Bridge the night it opened and using the ferries before that.

Andrew: You know, I didn't even think of buying a new SIM here. I guess I could have done that.

Debby: Wow! I didn't realize they got phones so recently!

Padre: They ARE interesting -- much more so than I expected.

Boud: I thought so too! I remember the postal service issued a stamp about them some time back, maybe in the '50s?

Sabine: Glad you liked the photos! I tried to give everyone a sense of what it was like to go through the locks.

GZ: Yes, the building is associated with the locks. There are several structures right around them, including an old post office.

Barbara: It's a HUGE change to be away from the Internet, but refreshing too. Enjoy it!

Ms Moon: I was never very interested in engineering or mechanical things but somehow the ingenuity behind these locks seems really impressive.

YP: Yeah, no deer hunting for me. Only with my camera! (And I didn't even get any good deer pics.)

Ellen D: Driving is funny -- it comes right back to me and seems very instinctive, even when I don't do it for a long time.

Robin: There's a lot of second-amendment cheerleading in this part of the world.

Margaret: Ha! I loved that movie. Haven't seen it in years but I still laugh about "Socrates" (the way Bill and Ted pronounced it).

Sharon: It did feel strange, but also peaceful. I kept thinking I had to check something and then thinking, "Oh, I can't! Oh well!"

Bob: RIGHT?! They ARE amazing.

Allison: Ha! Fortunately everyone I saw looked pretty competent in this location.

Kelly: I know -- mine too. I'm sure it's a significant house, being so close to the river and the locks.

River: Yeah, it definitely needs some work. I saw an otter run under the front porch, so I think there are critters living in and around it!

Mary: You know, I guess I never really thought about how many locks there are on the rivers of the world. Sixteen on the Danube alone! (Of course, it's a long river, but still!)

Ellen: That would be a cool trip! The canals around London have locks too.

Anne: Thanks for your comment! I imagine Sault Ste Marie got infrastructure pretty early because of its strategic importance in shipping, compared to other more remote parts of the UP. I was surprised to learn the Mackinac Bridge is relatively young -- for some reason I expected it to be older than 1957.

This is fascinating. I've never been to the Soo locks and this looks really intriguing. Maybe we'll drag Rick's mom up when she comes. I don't think she can manage the Island. Thanks for such a comprehensive look.

We spent three nights in Sault Ste. Marie, in a motel right across the street from the locks so I spent many an evening there watching boats go through. After our ferry ride to Mackinac and the obligatory "farting horse" tour, we didn't feel like we wanted to spend more money on the lock boat tour so we skipped that.