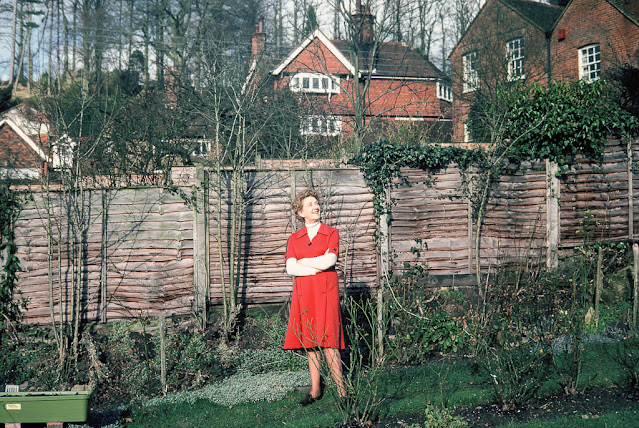 Let's take a look at some of the slides that I bought from that junk shop in Greenwich several weeks ago. I wound up with about 240 of them -- the shop's entire accumulation -- and after looking through them all I chose 35 or so to have scanned. My goal, as I've said before, was to rescue from obscurity good images that could easily have simply wound up in a landfill or incinerator, lost forever.

First, the slide above is dated February 1980. (The dates given in this post are all processing dates printed on the slides, so the pictures were taken some time earlier.) I love the red dress, the jaunty pose and the background of the patterned fence. I have several shots in which this same woman appears. 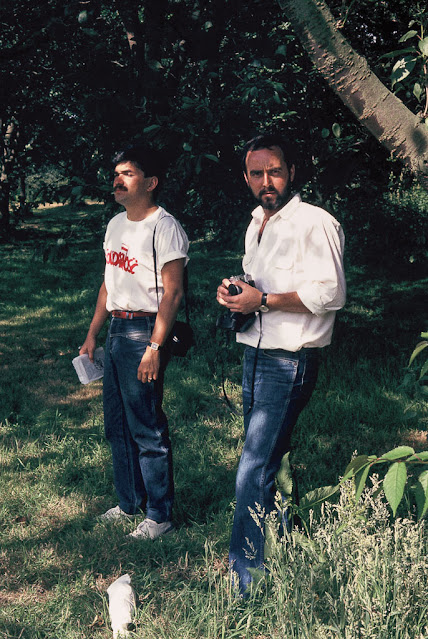 July 1984 -- Don't you love the Polish Solidarity party t-shirt on the guy on the left? Very au courant for that time. 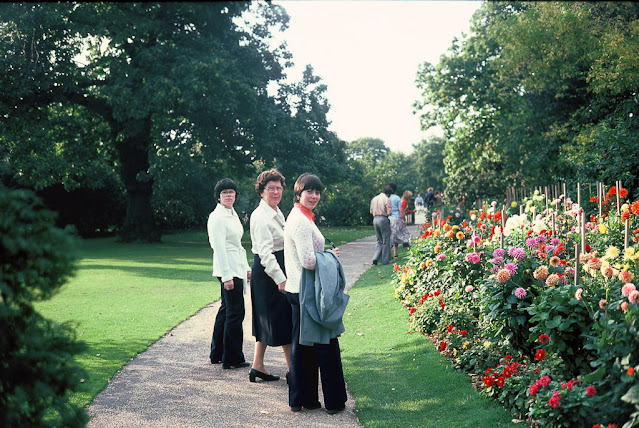 December 1978 -- A good colorful shot from a summery park. (Again, the picture obviously wasn't taken in December.) Those are some serious dahlia plantings. If I had to guess I'd say this is mother and daughters. 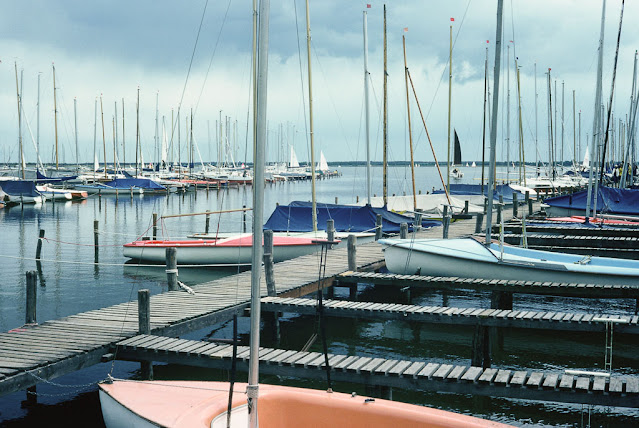 July 1977 -- I love the colors and strong vertical elements in this well-composed picture. As with most of these slides, I have no idea where it was taken. 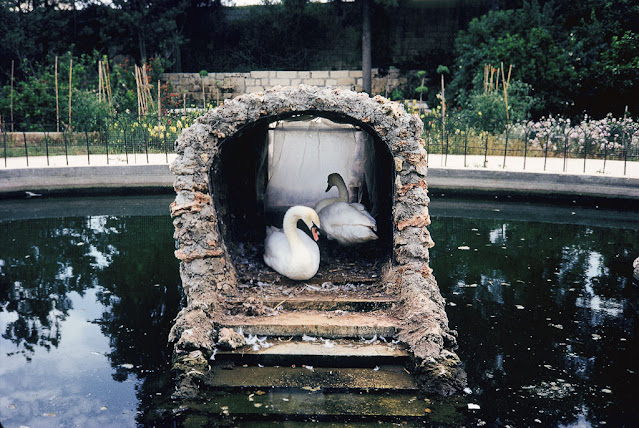 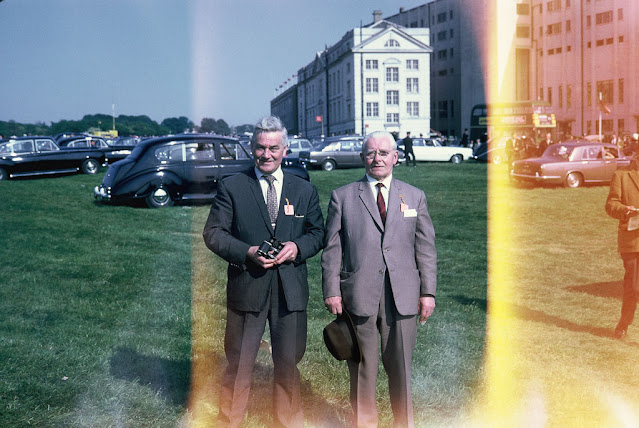 June 1968 -- Does anyone recognize this location*? It's obviously a big gathering of some sort, and these two gents appear to be wearing badges. Are they judges? One is holding a pair of binoculars. Even though the slide wasn't exposed correctly, I think the light leaks make for a cool effect. As Dave said, "It looks like they're beaming up."

*A reader correctly identified this as the old war hospital and the back of the grandstands at the Epsom Racecourse in Surrey. 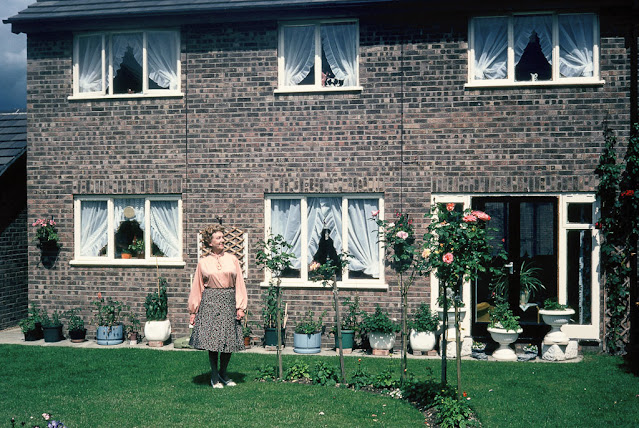 March 1981 -- I think the subject of this photo is supposed to be the woman (same as in the top photo) and her roses, but for me the curtains steal the show. 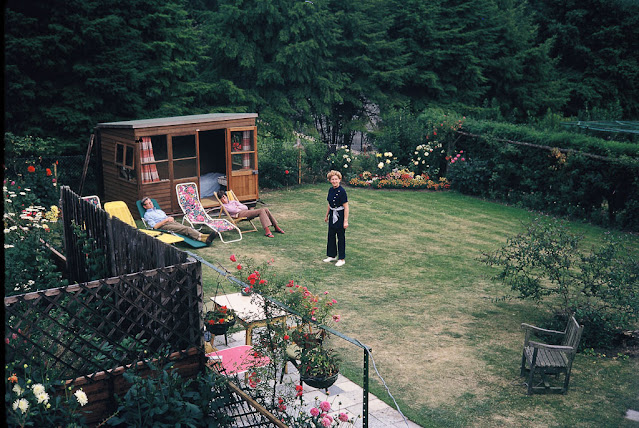 October 1972 -- And here she is again, enjoying a day in the garden. I especially like the purplish socks on the young guy in the lawn chair. Quite hip!
Posted by Steve Reed at 6:43 AM

I would say they are delegates at a convention of some sort and they are all required to wear their identity badges.

I would say that the two gentlemen are at race meet. Possibly Epsom, Ascot, Goodwood or another historic venue. I think they are round the back of the main stand. The binoculars add to that impression.

Regarding the three women on the path, I would say that it's a singing group going to a big concert - perhaps Martha and the Vandellas?...
Sometimes I stare in space
Tears all over my face
I can't explain it, don't understand it
I ain't never felt like this before
Now that funny feeling has me amazed
Don't know what to do, my head's in a haze
It's like a heat wave

Good luck with your return to school. I love the shot of the boats in the water. I agree, the vertical lines make the photo.

I can see why you buy these - fascinating glimpses into other lives. Wouldn’t it be cool if someone recognizes a familiar face and contacts you.

What a fabulous group. And such fun diagnosing what's happening. Like Victorian problem paintings.

The people with the binocs, I agree likely punters at the races, badged for the posh seats. Horses or dogs.

The women at the garden are in uniform. Maybe flight attendants between flights?

Anyway that was fun.

That woman loves to pose!

Personally, I love the boat photo.

I'm going to take a guess that the gentleman were at a horse racecourse near Liverpool (there are a number of them in the area). The reason for thinking of Liverpool is due to the green double decker bus in the background, as Liverpool had/has green DD buses.

It's so odd that here we are, commenting on these photos of people and wondering what was actually going on with them, over forty years ago. Some of these folks could actually be alive today. Purple socks kid for one!
These shots don't like like run-of-the-mill family photos to me. Someone knew what he/she was doing.
The man holding the camera is intense. Posing Lady to me looks like someone who loved being on the stage- perhaps local amateur productions?
You are so right about the curtains. They were someone's pride and joy.
That last shot in the garden is just too good.

There's a lot in these slides...very busy. The 35 mm took excellent photos.

If you look closely at the curtains pic, I believe there is a kitty looking out the window on the far right, above the doors.
The 3 ladies in the garden definitely look like Mom and daughters.
The last picture has an early "she shed" in it with curtains and a bed in it!

Gosh, that's fun! I can see now why you like to do this. We can all make up stories to go with the photos.
I hope someone who reads your blog recognizes someone or someplace!

Well done, saving these from the tip- they are treasures and stories and possible fodder for paintings. Especially the woman /roses/ curtains and pots on the walk way. So busy and twee, worthy of a painting or blind drawing!

One thing about slides, they don't have embedded information embedded in them like modern digital photographs to help figure them out.

Amazing how interesting you can make some total stranger's old photographs!

Are you familiar with Google Photo search? I threw the picture of the judges in and focused the area on the building in the background and it came back with the Epsom and Ewell War Hospital Grandstand. The below link has a spot on image of the same view in your photo background.

It surprises me that people give up their old slides and photos. I have boxes of old family photos. I plan to leave them to my nieces and nephews. It's a bit of history we can hold in our hands.

Love the boat photo! It's intriguing to step back into the past.

She sort of reminds me of my mother who would always strike a pose when getting her picture taken. Interesting photos overall.

These are a great selection. I like them all for different reasons. I see what you mean about the curtains in that one photo. They do have a starring role. She certainly has a nice house and garden. This was fun!

It really does look like the two gents are being beamed up.

Those are fascinating. And the quality of the slides is very good -- nice scans!

River: I thought the swan house was really interesting. I've never seen anything like it!

YP: I think you're on the right track re. the races, especially given what Ed found below.

Michael: Thanks! Are you going back yet? I need to catch up on your blog!

Marty: It would be VERY cool. I'm sure the mystery woman and many of the older people are no longer alive, but certainly some of the younger ones could be.

Boud: I think the mystery woman just had a good sense of how to pose for pictures, because the red dress shot and the shot with the roses were taken in different years. You're right -- the red dress shot DOES look like an author photo!

Bob: I can imagine she and her husband (or whoever took the photos) reading a book of tips on photography that suggested posing techniques!

Mary: Good thinking! I did not know that about Liverpool. However, as GZ said below, apparently country buses around London were also green, and Ed pinpointed the location in Surrey.

Ms Moon: I think you're right that someone DID know what they were doing. The mystery woman's photographer definitely has an eye and they both seem to know a thing or two about posing.

Red: Yeah, I wish there was a way to know what kind of camera he was using. An expert could probably tell.

Marcia: Hmmmm...I am not seeing a kitty. It looks to me like some kind of little pitcher or ornament. I love the term "she shed"!

Ellen D: It would be interesting if someone surfaces who knows these people.

Linda Sue: The composition in many of these photos is really good. Someone had a good eye.

Ed: BRAVO for solving that mystery! I used Google image search on some other pictures from this series but I didn't think to do it on that one. It's definitely the Epsom racecourse back in the day.

Kelly: I find old photos interesting no matter whose they are. It's all about the quality of the image.

GZ: Yes, Ed knocked it out of the park! Good to know about the London country buses.

Robin: I agree. Many years ago I threw away some of my own old photos and I've always regretted it.

Margaret: Isn't it?! Especially when there's an air of mystery about who and what we're looking at.

Ellen: It takes a certain confidence to make yourself the subject of a photo. She definitely knows how to draw the camera's eye.

Sharon: She was definitely very careful about maintaining her home, you can tell.

Bug: You mean dahlias? The flowers in the park?

Colette: Doesn't it?! It's a funny remark but apt.

Jeanie: Well, I did a lot of editing and color-correcting. Old slides tend to deteriorate just like other kinds of photographic material.

These are somehow magical. I'm so glad you're doing this.