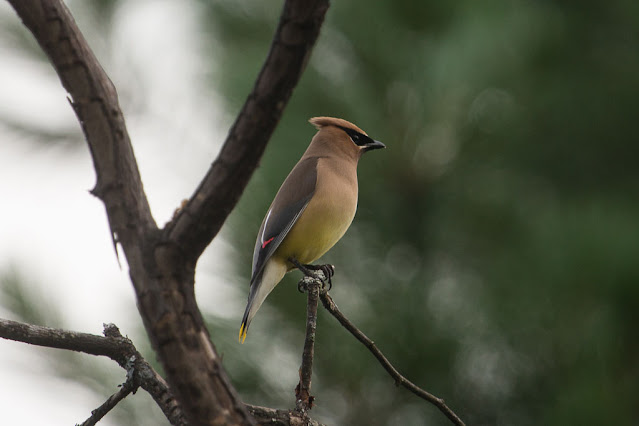 This was a pleasant surprise at my in-laws' cabin -- a pair of cedar waxwings in a dead tree. As my father-in-law pointed out, that sleek crest and black mask almost look like some kind of space helmet. It's Superbird!

Northern Michigan is some good bird-watching territory. Even though I was there only a few days I saw some interesting winged critters. The downside: I did find a tick on my leg, but it wasn't attached to me and didn't seem to have bitten me anywhere.

The heat was pretty intense too, on our last night. Just before we went to bed the indoor thermometer read 82º F (28º C) which isn't exactly a comfortable sleeping temperature, even with fans. Somehow we survived, and by early yesterday morning drizzly rain was coming down. 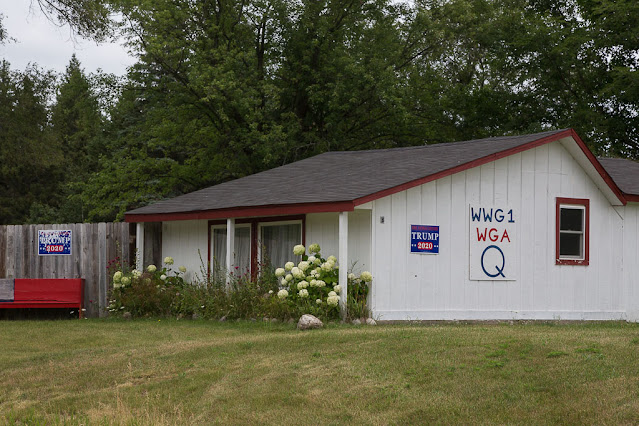 We loaded the car, cleaned the cabin and began our drive south. We stopped in the tiny town of Atlanta for breakfast at a place called Susan's, where the food was adequate but the pace of service was glacial. While we were there a few customers came in and then left again without eating, but most people seemed content to linger and wait. I guess people in Atlanta aren't in much of a hurry.

There were some interesting political opinions expressed along the roadways, all of the flag-waving, Trumpian variety. Lots and lots of flags. Flag-o-rama.

Once we got to I-75, I drove most of the way back, from the town of Alger to Flat Rock, south of Detroit. It was kind of a crazy drive -- there was stop-and-go traffic all the way into Flint, which my in-laws attributed to vacationers headed home, and then we got a torrential, blinding rainstorm. And there was periodic road construction. And we passed one fairly serious-looking accident, with ambulances. I kept thinking, "What else could go wrong?" But of course that's not a question you really want to ask while driving.

Anyway, we made it, and after unpacking the car we had Little Ceasar's pizza and relaxed. Dave and his sister bought his parents an iPad for their anniversary, and he spent a lot of time trying to set it up. He used it to order the pizza -- he's trying to convince his mom to do more online rather than always trying to call people. "You're a woman of the 21st Century!" he told her, even though she's still mostly a woman of the 20th.

I tried to catch up on some blogs, now that I have Internet, and I'll read more today. I was glad to see that my automated post appeared yesterday, though somehow I set it to publish at the wrong time. Five-thirty p.m.? I don't know what I was thinking. Oh well. I'm glad many of you managed to find it.

If I ever get nostalgic for the rural sounds of the cabin, I can play this:

Steve Reed · Michigan Field in Summer
I recorded that in a sunny field near the house. Just the afternoon breeze, chirping insects and distantly squawking blue jays. Peaceful!
Posted by Steve Reed at 11:54 AM

"Shadows and Light" is almost always an error free zone as its author is a very literate and punctilious kind of fellow. However, on this occasion he should have another look at his spelling of Caesar. Personally, I blame the tick. Did you manage to shoot a deer?

I'm guessing the sleeping temperature was more about humidity. I set my AC to come on at 82 and run a fan. But it removes moisture, so it's okay.
I hope Dave's mom doesn't get embroiled in online medical sites. You need rescue by phone from them! Ask me how I know this.

My son, before he got too busy, had a small sideline enterprise where he assisted and trained older people to use the devices their adult children had set up for them then departed. They couldn't remember a thing!

He'd show them very slowly then leave them with a printed step by step so they could finally do it. They were so grateful. I hope Dave prints out a step by step.

It is a very interesting bird.

Trumpian supporters may be very visible, but are they a noisy minority? Perhaps those in Chicago, New York and San Francisco overwhelm their vote, if not their visibility.

Posting time for blogs is something not to bother about. With world wide readers, it matters little. Do you get up at 5am Australian time to read my words of wisdom? No. I thought so.

I've recently realised how nature really dominates in the US. It is a vast and open land. Not quite butterflies in Times Square but pretty good.

I'm glad you found the tick before it got serious.

I hate driving in rain. Can't do it. Glad you made it safely.
I am sure there's a reason but I don't understand it- why are rural areas such hotbeds of Trump supporters? And around here it is definitely not just the ones living in trailers.
I had to google the WWG1 WGA thing. Hoo boy.
When did we become a nation of f**king nutters?

Convinced now, I will never in this lifetime go to Michigan. Thanks you .
Middle amerca is so not appealing , though there are interesting bits.So much driving! This nation built for car travel, the only way to travel. I am hoping that Mayor Pete does well with the railroads promises.

That bird is beautiful. What a wonderful shot. It sounds like you pretty much experienced all kinds of driving conditions on your way home. (Everything except for snow.) That little recording reminded me of growing up in Illinois. We had much the same summer sounds.

That sounds like quite an interesting journey. All those Trump supporting signs and flags would freak me out and I would definitely want to keep driving to get away from it.
The Cedar Waxwing is such a beauty. A great photo of it, Steve.
Now I'm wondering if I'm a woman of the 20th or 21st century... Mmmm... I could go either way.

Did you pass through Gaylord on your way to I75? That's my territory -- and yesterday was awful. I feel for you driving -- I hate rain driving. It's another rainy day up here and gloomy and cool (still in the 60s) so you're not missing a thing. Too many Trump signs and flags in the north. It's pretty creepy. Glad you made it back safely.

That cabin sounds like a very peaceful place. Glad you didn't find out what else can happen on the drive home.

Sounds like an awesome vacation. I have not had a long road trip in a very long time. I do miss that.
I have a quick question I'd like to ask you on a platform other than this public forum. If you're willing to communicate via email, send me your address. My email is on my profile.
Thanks for your time and have a safe trip please.
Tom

Cedar Waxwings are such elegant birds - I can imagine that one asking if you have any Grey Poupon. Ha! I'm glad you survived the crazy drive. We took I-75 from Cincinnati to Tennessee (where we connected with I-40) regularly before we moved to Xenia and I HATED it. Ugh. Terrible road.

Qanon country, eh? YIKES! Those are some seriously nutty folks.

That is a regal looking bird! I love bird watching although I don't actually go out to do so. The Trump lovers are very vocal and visible; we have them in WA too although we're considered a liberal state. Not everywhere, that's for sure!

The clip sounds like home to me. Despite ticks and Trump signs (at least that one is 2020, unlike the 2024 one up the road from me), I love rural life and living in "flyover" America. It's a shame so many folks make blanket judgements. We're not all crazy.

The Cedar Waxwing is beautiful.

More right wing nuts--at least you can identify and get away from them!

Cedar Waxwings are such beautiful birds.

I'm loving your holiday. Except for the tick and the highway accident.
I listened to the cabin breeze and thought it sounds like rainfall.

Agreeing here with Boud about leaving a printed step-by-step for your in-laws to follow. I write one when my daughter teaches me something new.

When I set up my mother with a computer for the first time, primarily so we could video chat every week, I wrote individual instruction pages for everything I could think of (and as much as I could get done in a week). Argh. “You didn’t tell me how to do that!” was the constant harangue. The trip sounds pleasant, other than the heat and ticks. Cedar waxwings are so perfectly named.

That message on the side of the building, I only found out what it meant yesterday. We were driving home and saw it on a jeep so I googled it. In this case apparently, they were all going to Costco. Fucking nutters.

What a gorgeous bird! And your FIL is right - how reminiscent of a futuristic space helmet. I'm glad you got the tick before it got you. I hate ticks with a white-hot passion! My brother, on the other hand, who camps frequently, is completely chill about them.