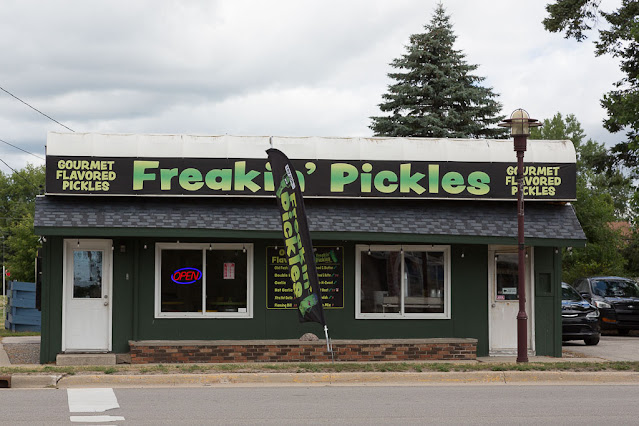 Well here I am, somewhere in the wilds of Michigan. For once in my life I have literally no idea of my exact location. We drove and drove yesterday on progressively smaller roads until we were winding through the woods on a graded dirt track, and that's how we got to the deer hunting cabin. There is indeed no Internet here -- at least, not yet. Apparently the infrastructure is in place but the cabin hasn't been hooked up.

My Internet connection is being provided via a "hotspot" through my sister-in-law's phone -- which I think basically means my computer is being channeled through her cell phone connection. I have no idea how these things work. But thank goodness they do!

We spent almost all day yesterday in the car. We left Detroit and headed north, passing near the mythical Saginaw of Simon  & Garfunkel fame, and through Tawas and Oscoda. The funny thing about this trip is that it's a nostalgic blast from the past for me. Back in 1998 I went to Michigan from my then-home in Florida to see some friends I'd known in the Peace Corps, and we spent a long weekend at my friend Natalie's vacation home in Oscoda. Well, yesterday, not only did we drive the same roads I took way back then but we even passed my friend's house! (I don't know if her family still owns it, but still...)

What are the odds of that?! 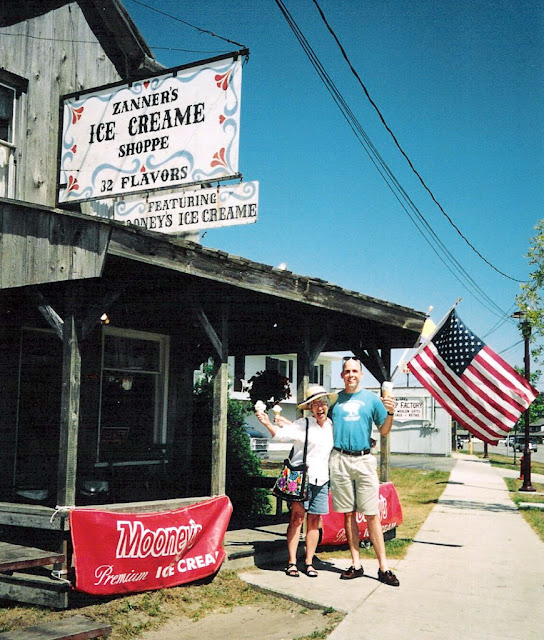 Here I am in 1998 with my friend Jeri, in front of Zanner's ice cream in Au Gres, near Tawas. 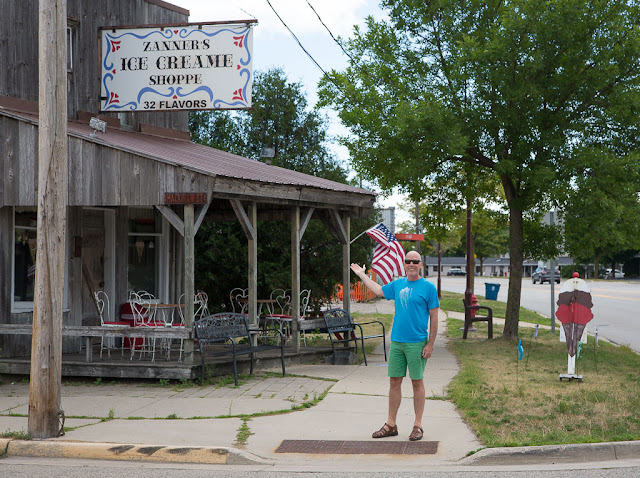 And here I am yesterday, 24 years later, in exactly the same place.

I just find it so strange. I had only a tenuous connection to this part of the world back then, and I certainly never expected to be back again someday with a husband in tow. You just never know where life is going to take you.

Anyway, the drive up was smooth and we eventually arrived in Lincoln, where my sister-in-law Dawn runs a restaurant called the Backwoods Bistro. We all stopped there for lunch -- a mushroom-swiss burger with sweet potato waffle fries for me -- and caught up with family. 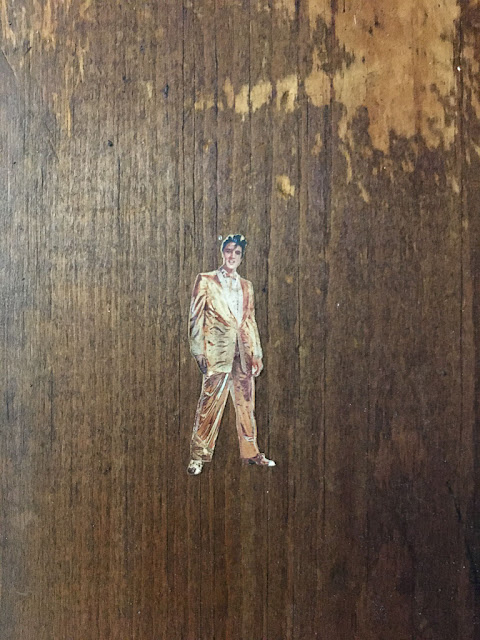 We had a quick tour of the kitchen. There's a tiny sticker of Elvis on the wooden door frame of the walk-in cooler. No one knows why. He's an unofficial mascot.

Then we were all back on the road and headed into the wilderness. I haven't had a chance to look around here too much, partly because I'm wary of getting ticks in the grass and underbrush around the cabin. But today I'll put on some insect repellent and long pants and make a go of it. Life is risk, right? 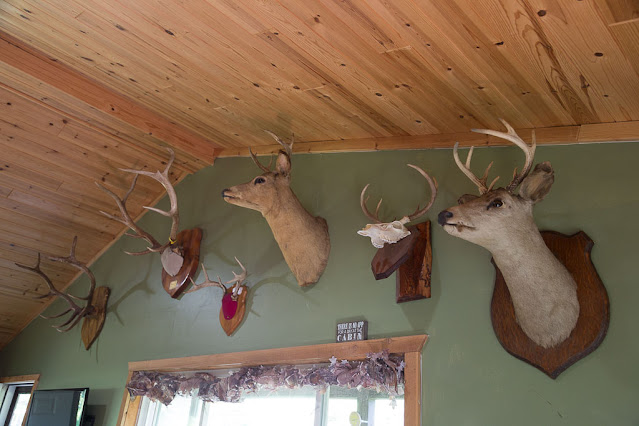 That tiny sign above the window says "There is no app for a day at the cabin." That is certainly true. I feel like I'm tethered to the World Wide Web (is it still called that?) by only the most tenuous, spider-web-like filament. This post has taken ages to write and frankly I'm amazed it has worked.

Now let's see if there are any deer browsing in the grass out there. (Although this is a deer hunting cabin, it will surprised none of you to know that I'm not hunting anything. Not only is it not season, but the only shots I'm ever likely to take are with my camera!)
Posted by Steve Reed at 11:40 AM

How cool you could get a photo of you in the same spot decades later. love that!

You look rather better dressed now than you did 24 years ago. Otherwise, you don't look much different.

Your are right. You never know where life will take you. I enjoyed your post.

A trip down memory lane... Surprised you didn't knock on your old friend's door. As for the cabin, may I suggest that you keep a watchful eye out for bears as they are very partial to school librarians.

An unexpected trip, still liking to wear the same colors, I see! I didnt see you as a deer hunter, exactly, even in season.

Nearly 40 years ago my parents bought a small cabin in the wooded mountains of northwest Arkansas. It has never been a hunting cabin but rather a retreat from the world. Even to this day, time there is salve for my soul. Enjoy your cabin!

That is absolutely crazy, Steve! Of all the gin joints, uh, I mean ice-creame shoppes in America!
Seriously- quite odd to find yourself in such a seemingly unconnected way to the very same places. I've always said that yes, we do create our own realities and sometimes we just run out of ideas.

That is pretty amazing that you took the same route as you did way back when. Also that you remembered it - I can never remember things in such detail. Well, I would probably remember the ice cream shop.

Have fun in the woods today!

It's surprising to me that you had that old photo of the ice cream shop available to share. I have to look on memories of old lap tops to find the saved photos from back then. So glad you've got insect repellant! Have fun communing with nature.

I love that the ice cream shop sign has barely (if at all) changed in all these years! What a fun revisit! There's something about the woods that's really fun. Well, sometimes really buggy, but fun, too! Glad youhave internet there, of a sort.

I love seeing the old and new photos of you 24 years apart in the same place in Michigan. How crazy is that? Yes, be careful of those ticks, and enjoy the hiking around in the woods there.

And, what a good shot you are....with the camera that is! I can't believe that ice cream place is still there all these years later. Businesses seem to last longer in the midwest than in the west. Have fun in the wilds of Michigan.

I was amazed how much you look exactly like your 24 years younger self! Good for you, Steve!
Sounds like you are having a terrific time! Glad you were able to post!

Not only in the same spot but also wearing the same color shirt. I see the Mooney's ice cream sign is gone, are they selling a different brand?

Fun post! (though I think on this trip it's Dave who has you in tow, since you're technically in his neck of the woods)

Welcome to my life. I'm currently hooked up to my phone's hot spot because most of the time it's FASTER than the satellite service we have! (first world problems)

My late husband went hunting once and shot a deer. Immediately after that he traded his then brother-in-law his rifle for a camera because that was the only way he would shoot another animal. Well, did you get any ice cream? Either time? :) It looks and sounds quite rustic there. An interesting place to visit but not to live.

Dead thing decor- it is a thing...

Life works in funny ways sometimes! I love the two photos taken so many years apart. I'm sure you will get some wonderful photos and I'm glad you're aware of the tick possibility. What cooking facilities do you have at the cabin? Will Dave be cooking? lol

What a great adventure.

I'm surprised that an urbanite like you would find a rustic cabin to stay in.

Yikes. Scary country! (Written by someone who lives in Yavapai County, Arizona. With his head down.) At least I have reliable internet.

Small world...what happened to the friend whose house you passed by?

PS We have a Ford's Garage near the big Aldi in my part of town...and no, it is good but hardly healthy.

You look exactly the same! I spent the last twenty years putting on twenty kilos!
The ice cream shop looks wonderful, but I don't like the animal heads on the cabin wall.
After applying the insect repellant, allow it to dry then add another layer. You can't be too careful.

Great photos. Too bad you couldn't get your friend Jeri for that redo. I often use my iphone as my hotspot for internet connections.